Seeking a Cure: What can be done to stop the rash of rural hospital closures? 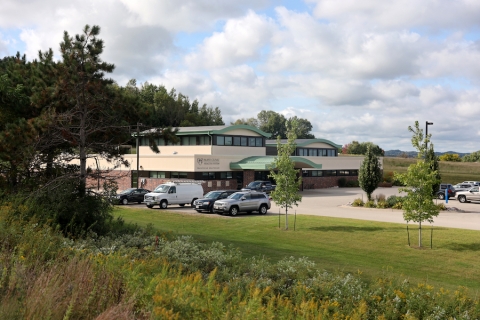 The Mayo Clinic Health Systems’ clinic in Arcadia, Wis., is seen on Sept. 19, 2019. The area's hospital closed in 2011. This new clinic was built in 2016 to meet primary health care needs of the area's rural residents.   (Photo by Coburn Dukehart / Wisconsin Watch)

Small rural Midwest community hospitals, squeezed by financial and regulatory pressures, are scaling back on services, merging with larger hospital systems and searching for other creative ways to survive in the short term, an Institute for Nonprofit News investigation by 12 news organizations in seven states revealed.

Rural health experts said the real challenge in this quiet transformation will be to redesign rural health delivery so that residents do not lose access to high quality, timely care.

“Usually there are two sides to every story, but there are not really in this one,” said Alan Morgan, chief executive officer at the National Rural Health Association. “Everyone realizes we’re at a crisis point.”

Across-the-board cuts in Medicare payments and reductions in reimbursements for uncollected patient debt disproportionately have impacted rural hospitals, whose patients are more likely to be enrolled in government health programs.

Rural hospitals must support fixed costs with fewer patients. They frequently struggle to comply with regulations that are not designed for small facilities, or maintain aging buildings that date back to an era when hospital stays were longer and inpatient care was more common.

Across the country, 113 rural hospitals have closed in less than a decade, including 16 so far this year. Most hospital closures have been in Southern states — particularly states that rejected expanding Medicaid to all low-income adults under the Affordable Care Act. But even in the Midwest, 16 percent of rural hospitals rank high or mid-high on a financial stress index developed by University of North Carolina Cecil G. Sheps Center for Health Services Research.

Navigant, a consulting firm with clients that include hospitals and state hospital associations, crunched the numbers in a different way — looking just at operating margins, cash on hand and debt — and concluded that 18% of rural hospitals in 12 Midwestern states were at high risk of closing unless their finances improved.

Some rural hospitals, like the Bigfork Valley Hospital in northern Minnesota, which hasn’t turned a profit since 2006, have managed to survive by deferring maintenance, holding off on equipment purchases and asking taxpayers — sometimes repeatedly — for help.

Others, like Sturgis Hospital in southwestern Michigan, have made deep cuts, laying off staff, cutting inpatient beds and closing money-losing clinics and departments like obstetrics and oncology.

Across the region, many small independent hospitals are merging with larger health systems, trading a degree of local decision-making power for the resources and security of a large health network, the news organizations found. In states like Wisconsin, where fewer than a dozen rural hospitals have not partnered with or been absorbed by a larger hospital, consolidation can breathe new life into struggling facilities, as it did in Neillsville — a town of about 2,400 people 52 miles southeast of Eau Claire. In Ironwood, a small town in Michigan’s Upper Peninsula, hospital officials say if it were not for a 2010 merger with a larger health system, the hospital would not have survived.

Arrangements such as the “share care” obstetrics program at Hansen Family Hospital in Iowa Falls allow patients to access routine prenatal care at local hospitals before transferring to larger facilities for late-term care and delivery.

Low patient volume, recruitment challenges and red ink have led rural hospitals around the country to shutter obstetrics services. As of 2014, fewer than half the nation’s rural counties had in-county hospital services, according to a 2017 analysis by academics at the University of Minnesota Rural Health Research Center. Nearly three dozen small Iowa hospitals have stopped delivering babies over the past two decades. Eight hospitals eliminated obstetrics last year, state public health records show.

But consolidation is no panacea. Central Kansas’ Hillsboro Community Hospital leaders thought they had found an answer to the hospital’s financial troubles when it was taken over by a Florida group, Empower HMS, but bills piled up at the 15-bed facility, staff went unpaid, and employees held fund-drives just to feed their patients. The hospital was forced into receivership.

Even when it makes sense on paper, regionalization can be a hard sell, consultant Dr. Daniel DeBehnke, Navigant’s managing director for Healthcare, said.

“I think it’s related a lot to the fact that those rural hospitals have been the mainstay of those communities for many, many years,” said DeBehnke, who as CEO of Nebraska Medicine developed partnerships with small rural facilities, seeking economies of scale on back-end services such as electronic records. “Generations of families have been born in that hospital. The reality, though, is that there has to be some degree of change.”

Although all rural hospitals face similar pressures, rural communities are not homogenous. Experts agree that protecting rural health will require a variety of near- and long-term fixes that can be tailored to specific communities. They also agree: Emphasis must be on preserving and enhancing services, not the status quo.

Short-term proposals include increasing or refining Medicare reimbursements to better target hospitals at greater risk for financial distress. They include expanding cost-based reimbursement to rural hospitals that are too big for Critical Access Hospital status, reforming health insurance to increase competition in rural areas and bad debt relief.

Other proposals seek to modify regulations to better accommodate small facilities and small budgets, such as a proposal which would allow hospitals to share reception, public restrooms, corridors and other common areas with other healthcare providers.

Pilots and demonstration projects are exploring ways to position rural hospitals at the center of healthy communities, hubs connecting patients not only to outpatient services but with local public and behavioral health services, meals programs and other community partners. Global budgeting — lump-sum allocations to hospitals rather than fee-for-service payments — are getting off the ground.

“It aligns the economics with actual health, as opposed to sickness,” DeBehnke said. “It’s the right alignment of money, strategically, with the outcomes we want.”

The idea has gained wide support among rural health care advocates, but failed to gain any traction in Congress, where it died in committee.

“It’s a really good bill, and we think it would fix a lot of the issues, but it’s been caught up in national politics,” DeBenke said.

“I think the ‘sticking point’ is Congress,” Morgan said. He said he is optimistic that once things start working again on Capitol Hill, the bills will move.

A new health campus in Rock Rapids in far northwestern Iowa provides a good example of what this new model of care could look like. The $28.9 million hospital and clinic facility, which opened in May, was bankrolled through a combination of community donations, hospital association funding and a loan from the U.S. Department of Agriculture. It includes space for visiting specialists, telemedicine services, same-day primary care appointments and wellness amenities including a therapy gym.

Other efforts are underway to recruit the next generation of doctors, nurses, technicians and other medical professionals to underserved rural areas. A University of Missouri system Rural Track Pipeline program includes scholarships for students from rural areas, rotations at rural hospitals and a week-long immersion program designed to introduce students to small-town life.