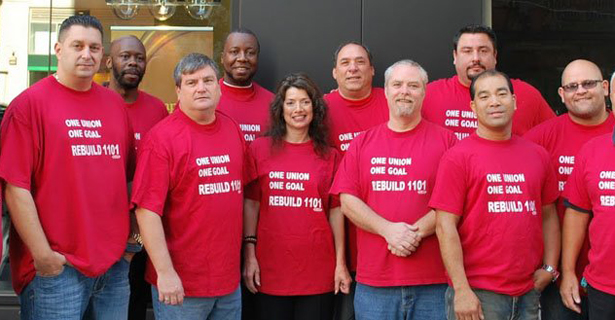 'Rebuild' slate takes over in NYC, after years of corrupt mismanagement

My first contact with union reformers in New York City was nearly 35 years ago. Like many rank-and-file dissidents, before and since, these critics of corrupt labor officials were prophets without honor in their own local.

IBT Local 282 was, at the time, one of the most mobbed-up affiliates of a national union notorious for its organized crime ties. My friends in 282, who drove trucks full of cement to building sites around the city, displayed enormous, almost reckless, courage. They were, after all, tangling with some of the best friends a “wise guy” ever had inside a big city construction local—and in real life, not on The Sopranos.

Understandably, most  “ready mix” drivers were too afraid to go anywhere near foes of the Teamster leadership, much less join their opposition group. In fact, well-connected 282 members actually looked down on those who challenged IBT associates of the Gambino Family. To them, would-be reformers were just a bunch of “Boy Scouts” or “enemies of the union” working for “the feds.”

But institutional loyalty, where it still exists, tends to run deep. When grifters, gangsters and autocrats hold union office in the five boroughs, they’re usually smart enough to deflect any membership criticism of themselves by re-casting it as an “attack” on the union itself. Plus, there’s a deep well of local cynicism, for incumbents to tap, about the inevitability of corruption in politics, business, and labor.

After all, this is the city where Brian McLaughlin, a big player at the intersection of all three fields, managed to steal more than $3 million while serving simultaneously as a N.Y. State Assemblyman and leader of the nation’s largest Central Labor Council (CLC). The victims of his shakedowns or thievery included the state of New York, the CLC, various IBEW contractors, his own re-election committee and a union-sponsored Little League team in Queens!

In a revealing display of outer-borough solidarity (of the wrong kind), Bronx-born John Sweeney, then national president of the AFL-CIO, urged the federal judge sentencing McLaughlin’s to be lenient. He cited his friend Brian’s “long record of service to the working men and women of New York City.” The judge demurred, sending the defendant away for 10 years because his “brazen” misconduct and “abuse of trust” lent credence to “the harshest critics of organize labor who accuse the leadership of corruption.”

On the job in lower Manhattan, Verizon technicians like Kevin Condy and Al Russo often encountered members of IBEW Local 3, whose Little League team lost $95,000, thanks to McLaughlin. While Brother Brian awaited sentencing three years ago, Condy and Russo were more concerned about official misbehavior in the Communications Workers of America (CWA), their own union.

The 7,000-member Local 1101 is the largest telecom local in the northeast. In its youth as a CWA affiliate, 1101 exemplified labor insurgency in the 1970s. As Aaron Brenner reports in Rebel Rank and File: Labor Militancy and Revolt from Below (Verso Books, 2010) telephone workers in New York battled management and, at times, their own national union during a seven month work stoppage:

“The 1971-2 strike experience unified one of the most important CWA locals in the country, making it much more effective in protecting workers’ rights and improving their wages and benefits. A few rank-and-file activists maintained their organization and continued to push the union toward more militancy, but over time they either integrated into the union apparatus or joined the ranks of the apathetic.”

Four decades later, the entrenched political clique running 1101 had been around so long that 11 out of 13 executive board members were now retired from Verizon. This meant they were collecting their pensions from the company, plus six-figure union salaries. In some cases, they were also enjoying additional forms of personal enrichment, at company and/or union expense—a matter now under active investigation by the U.S. Department of Labor.

In 2008, Condy and Russo decided to rally “the ranks of the apathetic” and overthrow the “old guard” in 1101. Both were chief stewards and Condy was  a “member organizer.” In fact, they considered themselves to be charter members of the CWA “stewards army” that new national union president Larry Cohen tried to summon into being after taking office in 2005. In contrast, most Local 1101 officials only paid lip-service to the idea of “member mobilization,” preferring instead to run the union in calcified, top-down fashion.

Condy and Russo started out with a full slate in 2008—but ended up running just by themselves. Everyone else, among the fellow stewards that Kevin and Al originally recruited to run with them, decided to drop out. The threats of retaliation and/or patronage promises made by incumbent officials were simply too persuasive.

Both opposition candidates lost by about 400 votes out of 1,800 cast. They were up against a well-financed political machine, which controlled the local union election process, from start to finish. As additional job protection, the incumbents had managed to implant two Local 1101 alumni in the top CWA national union positions in New York City. These District 1 officials had friends or relatives in the 1101 hierarchy.

All of these “friends of 1101” could be counted on to do very little when rank-and-filers complained about unfair election practices, inadequate representation of newly organized AT&T wireless workers, or, more recently, the abuse of membership dues money.

After their election defeat three years ago, Condy and Russo didn’t just lay low and lick their wounds. They left their campaign website up, stayed in touch with outside helpers like Labor Notes and the Association for Union Democracy, and steadily expanded their network of rank-and-file contacts.

None of this was easy to juggle with a full-time phone company job, family and community responsibilities, labor education classes at night, and a spot high on the “shit-list” of Verizon managers and 1101 business agents. But, over time, Condy and Russo were able to involve more stewards and chief stewards in a broader reform grouping called “Rebuild 1101.”

By late 2010, the rebuilders had enough political juice to turn out more than 800 fellow workers, two days before Thanksgiving, to challenge the 1101 leadership about by-laws reform. Three months after that rare membership meeting quorum, some dissenters in the local leadership blew the whistle on their sticky-fingered (and now estranged) colleagues.

They asked CWA President Cohen to put the local under trusteeship, a request that triggered an investigation, conducted by an upstate NY CWA official and an auditor from CWA headquarters. In March, it was disclosed that 1101 leaders had granted themselves unapproved perks like un-receipted weekly expense allowances that were costing the treasury $156,000 a year.

These and other financial abuses led some in 1101 to call for a national union take-over of the local. But the trusteeship record of CWA District 1 was not confidence inspiring. Just three years ago, District 1 removed the leader of a CWA-affiliated newspaper union who embezzled $375,000 in dues money; the  staffer appointed by D-1 to run the local, under trusteeship, proceeded to steal another $60,000, leading to two embarrassing scandals (and jail sentences) instead of one.

Some rebuilders also realized that a trusteeship would just postpone the 1101 election, scheduled for this month—instead of giving members the chance to clean up the local themselves. Cohen and the CWA executive board decided to install a “monitor” in the local, a retired national union staffer, not connected with District 1. His mandate was financial oversight and insuring the fair vote that Condy and Russo didn’t get last time.

In the monitor-supervised mail ballot that ended November 21, turnout was very high—more 3,000 members participated. After an expensive and exhausting campaign, the entire 12-member Rebuild 1101 slate, headed by Keith Purce, was elected, most by a two-to-one margin. Condy is the local’s new secretary-treasurer and Russo will serve as one of 1101’s three vice-presidents.

Rebuilder supporter Pam Galpern told Labor Notes that the vote vindicated “the principle that an educated mobilized membership is the backbone of a strong union.”

Another member of the local, a hard-bitten veteran of CWA’s seven-month strike against N.Y. Tel 40 years ago, saw the results this way: “It was a reaffirmation for all of us that, if you rob the members and try to stock the leadership with relatives and friends, the members will turn against you.”

Steve Early was a CWA national staff member for 27 years. He has been a strong supporter of the Local 1101 Rebuilders and other CWA reform campaigns. He is the author, most recently, of The Civil Wars in U.S. Labor (Haymarket Books, 2011).