Bargain to Organize: From Boon to Embarrassment 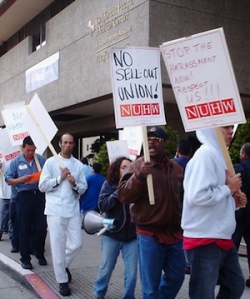 Some unions are using a "debased" form of the Bargain to Organize strategy to gain an edge over rival unions--here, the NUHW protests SEIU/UHW's use of such tactics in California.   (Spotreporting / Flickr / Creative Commons)

One sign, among many, of labor's current travails is the stalled union growth strategy known as "Bargain to Organize."

More than a decade ago, there was no bigger buzzword in union organizing circles. When John Sweeney was elected AFL-CIO president in 1995, he encouraged affiliates to employ the tactic by pressuring unionized companies to permit uncontested organizing drives at their non-union facilities or subsidiaries.

In one model Bargain to Organize campaign that began in 2008, the 6,000 SEIU members employed by Help At Home, a for-profit home healthcare company, used their own contract negotiations in Illinois to confront management about its record of union-busting in neighboring Indiana.

Then-SEIU organizer Matt Luskin reported that after an aggressive membership mobilization campaign, Help At Home signed an agreement that not only gave raises and better benefits to Illinois workers, but also "expanded the organizing rights of thousands of workers in other states where the company operates."

In every industry setting, the goal of Bargain to Organize has been some combination of management neutrality, card check, and/or a "free and fair" election process that enables workers to engage in union activity without harassment, threats, intimidation or job discrimination.

One major success for the strategy came after a five-year struggle in the 1990s, when the Communications Workers for America (CWA) finally won a card check and neutrality deal that now applies to employees of AT&T Mobility. Under its terms, AT&T will recognize CWA if a majority of the workers in a pre-specified bargaining unit sign union authorization cards. The American Arbitration Association (AAA) conducts the card count and certifies the results. AT&T Mobility managers are not allowed to interfere with union organizing activity. Management is even obliged to provide CWA with employee information and workplace access that's not required under National Labor Relations Board election rules.

This negotiated process eliminates the Board's role in determining the scope of new bargaining units--a frequent source of representation election delays. Plus, it avoids the costly, uphill battle of an employer-contested NLRB election campaign.

Through card check, more than 40,000 AT&T cellular technicians, customer service reps and retail salespeople have gained union contract coverage. In the heyday of Bargain to Organize, similar large-scale membership gains were made by the Teamsters at UPS Freight; UNITE HERE at the Hilton Hotel chain; the SEIU and other unions at Kaiser Permanente; and, most recently, the SEIU and California Nurses Association at Hospital Corporation of America (HCA). (For more details on some of these struggles, see "A Look at Three 'Strategic Campaigns.'")

Fewer Deals To Be Made?

In the last several years, however, few AFL-CIO or Change To Win affiliates have made any new large-scale Bargain to Organize breakthroughs. Although some unions are still waging "leverage campaigns" to neutralize employer interference--like UNITE HERE's crucial Las Vegas battle with the non-union Station Casino chain--existing bargaining relationships have not yielded additional protections for unrepresented employees at Verizon, General Electric and many other partially unionized firms.

Instead, unions in telecom, manufacturing, and other industries have been thrown on the defensive by management demands for contract concessions. In this climate, union proposals for organizing rights have become "throwaway demands." The demonization and defeat of "card check" in labor's failed 2007-10 campaign for the Employee Free Choice Act (EFCA) has led some unions to abandon that approach in favor of the old model of secret ballot elections (with an employer pledge that they will be "free and fair.") However, in many tough bargaining situations, "even those modest steps are next to impossible now," says one top union leader. "That's why most people aren't even trying anymore."

Where some unions have continued to use their bargaining relationships with employers to gain or maintain membership, the results have become increasingly controversial and even legally questionable. They have revived longstanding rank-and-file concerns about unfavorable trade-offs between contract standards and growth.

Such Bargain to Organize tensions and controversies are not new. When I was working with CWA members in the 1990s at the phone company now known as Verizon, it took much education and discussion before local union activists embraced the idea of putting organizing-related demands on a par with wages, benefits, and working conditions. Even after organizing rights became a strike issue--in a 17-day walkout by 75,000 Verizon workers in 2000--some influential local officials still viewed card check and neutrality as a far-removed "national union issue." (Many International Brotherhood of Electrical Workers strikers viewed it as just a CWA issue!)

In 2008-2010, as I reported in The Civil Wars in U.S. Labor, the costly series of disputes that enveloped SEIU, CNA, and UNITE-HERE arose partly over Bargain to Organize strategy disagreements. Then-Change to Win leaders Andy Stern and Bruce Raynor argued that "contract relief" was needed to gain an organizational foothold in healthcare, food service, and other industries. If local unions weren't willing to partner with management and promise some degree of "labor peace," too many nursing homes, hospital chains and catering contractors would thwart unionizing efforts.

Critics of this non-transparent, concessionary approach now cite United Healthcare Workers-West, SEIU's third largest affiliate, as the latest practitioner of a debased form of Bargain to Organize. Instead of mobilizing its members like SEIU's Illinois Healthcare affiliate did at Help at Home, UHW has bargained to keep its existing dues-payers from escaping to the new National Union of Healthcare Workers (NUHW).

Earlier this year, UHW was faced with the defection of 750 workers at Seton Medical Center to NUHW. So the incumbent union made a side deal with the hospital owner, the Daughters of Charity, which consolidated five separate bargaining units into a single one covering 3,000 employees. This tentative agreement--designed to make decertification more difficult--was made contingent on subsequent union approval of pension and medical plan changes.

When these proposed givebacks were revealed in late April, Daughters of Charity workers discovered that they will now have a 401(k) account rather than be covered by a defined benefit pension plan; they will pay 25 percent of the monthly premiums for previously free PPO medical coverage; their out-of-pocket costs for medical plan utilization (doctor visits, prescriptions, etc.) will double; and workers who fail to meet various "Wellness Program" standards for personal healthiness will pay 20 percent more for the cost of their insurance premiums.

To get these concessions approved, UHW conducted a rushed two-day ratification vote that began less than 12 hours after a settlement was announced. (The SEIU constitution requires 3-days advance notice of such votes; workers at Daughters of Charity got only nine hours.) According to workers who complained to SEIU president Mary Kay Henry, UHW reps refused to provide them with copies of the tentative agreement. Disgruntled Daughters of Charity workers continue to organize for NUHW and expect an NLRB re-run of the election they narrowly lost at Seton Medical Center in March.

At Chapman Hospital, a non-union hospital in southern California, UHW/SEIU engaged in organizing misconduct that publicly discredits the very concept of card check--playing into the hands of the rightwing, corporate opponents of Employee Free Choice Act. UHW announced last winter that 220 workers had formed a new bargaining unit after a card-check process agreed to by management. In June, however, the NLRB issued an unfair labor practice complaint against Chapman and UHW, charging that the hospital had recognized the union without real majority support. To avoid a hearing, both parties signed a settlement earlier this month that removed UHW/SEIU as the bargaining representative of the hospital workers.

In Kentucky, the NLRB has also cracked down on a similar example of company-union collusion. On August 1, the Board asked a federal court to issue a rare 10(j) injunction against the UAW and Voith Industrial Services, a contractor hired by Ford in February to transport newly assembled SUVs from its Louisville assembly plant. This car haul work was previously performed by 160 members of Teamsters Local 89 employed by Jack Cooper Transport, a signatory to the IBT's national auto transport contract. According to the NLRB, almost all of these experienced, $20-an-hour Teamster drivers were replaced when Ford brought in Voith instead. Voith's replacement workforce (paid $11 per hour) then came under an inferior contract, pre-arranged with the UAW, per a similar deal involving Ford and Voith in Michigan last year. Recognition of the UAW was granted before most new drivers were even hired.

Bargain to Organize's bottom fishing, like the UHW's card check sham at Chapman or the UAW's undercutting of the IBT in car-haul, may add to "union density" on paper but it's not going to boost workers' power or help anyone make contract gains. Likewise, the challenge of persuading union members that they have stake in union growth strategies only gets more difficult when concession bargaining becomes a way of slamming the door on employee free choice between competing unions.