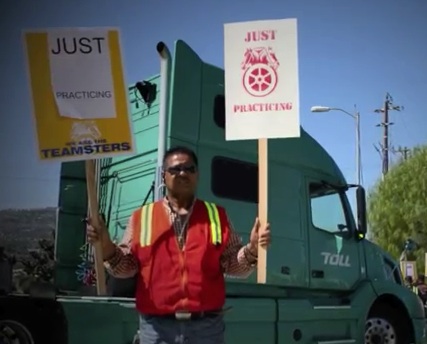 Six months after Los Angeles-area port truckers won a rare union election in a nearly union-free industry, contract negotiations have hit the rocks. The union, Teamsters Local 848, charges that Australia-based logistics giant Toll Group has broken its promise to bargain in good faith. With truckers on both coasts watching the negotiations closely, the increasingly public showdown could continue to escalate.

Will it end in a strike? “We’re ready to do whatever it takes to get our contract,” said Eduardo Urrea, a member of the union’s bargaining committee.

In the meantime, the Los Angeles-area port truckers have started conducting near-weekly “practice pickets.” “They’re mastering the art of practice,” said TJ Michels, a spokesperson for the labor federation Change to Win. “Because eventually, practice might have to make perfect.”

As I reported, the Toll workers’ April election was one of the few such votes to be held in the port trucking industry since it was deregulated three decades ago. Most of the nation’s port truckers are classified as “independent contractors” and thus legally ineligible for union recognition. But Toll’s direct employment of its truckers--a relic of a since-overturned Port of Los Angeles regulation--made them an exception, at a moment when the International Brotherhood of Teamsters is campaigning to establish a foothold in the industry.

Toll’s labor relations in LA have been bitter all year. In January, the National Labor Relations Board issued a complaint against the company for violations of labor law including interrogation, retaliation and discrimination against employees. The union alleged that prominent worker activists were fired as punishment for organizing. Workers also reported that the company had exercised its legal right to hold a series of mandatory anti-union meetings prior to the election. “They said that the union was not good,” Urrea told Working in the These Times, “that the union was just going to take our money.” (Urrea was interviewed in Spanish.)

When the Teamsters won the election in April, Toll did not challenge the 46-15 tally in favor of unionization. In a statement emailed April 12, the company was careful to  emphasize what a small portion of its overall workforce would be affected, but said it would “recognize our employees’ decision” and pledged to “negotiate with the union in good faith.” Nonetheless, in interviews that month, workers and union officials predicted that the company would do whatever it could to deny them a fair contract.

The union says those fears have come to pass. While declining to discuss the details of negotiations, Michels said the company has “used several delay tactics when it comes to winning a fair contract.” Urrea said the negotiations “are going very slowly now. We’re a little frustrated.” In the months since the vote, said Michels, “the drivers say there hasn’t been satisfactory progress. That’s why they’re conducting these practice pickets.”

Reached over e-mail Wednesday, a Toll Group spokesperson said the company “has been negotiating with the Teamsters union in good faith since negotiations began and we will continue to do so. Management’s focus is on working through the vast number of articles, offers and counter-offers [presented] by the union to ensure a positive and fair outcome for all of our port drivers.”

What makes these events a practice, said Michels, is that the workers are “doing this on their own time.” In other words, they’re not on strike--for now.

Urrea alleged that Toll has been trying to intimidate workers since the election by subcontracting more of their jobs to other companies, and by installing new technology in the trucks that allows management to more closely monitor workers’ moves. “The reason they’ve done this,” he said, “under the guise of safety, is to find any mistake we make on our route, in order to get us in trouble.”

Urrea described the “practice pickets” as a way to show Toll that “when they do something to harm us, that’s only going to make us stronger and more united than ever.”

Workers have also repeatedly leafleted customers at the Under Armour outlet in Southern California. Toll transports goods for the athletic-clothing store. The workers’ leaflet asks why Under Armour, which “claims to guarantee the highest performance of their athletic apparel” would “use a low-standards trucking company?” It charges that Toll is “doesn’t treat their drivers with respect, and refuses to negotiate in good faith with them” and is “degrading its U.S. workers.”

Fred Potter, the Teamsters Port Division Director, said the practice pickets and client leaflets have led to “some progress” at the bargaining table.

The Teamsters have signed a global solidarity pact with the Australian Transport Workers Union, TWU, which represents Toll workers. TWU members and leaders repeatedly visited southern California to support the organizing drive in the lead-up to the April election. If the situation escalates, they could be back.

The struggle comes at a tough time for Toll. In August, the Sydney Morning Herald reported that female Toll employees alleged “a culture of sexism, bullying and harassment within the company’s biggest division, Toll Global Express.” That report followed a scandal over senior executives wearing aprons with male genitalia and simulating sex with a toy donkey at a work event. The Herald reported that Toll’s chief executive wrote to staff that the incident had “marred” Toll’s “reputation,” while blaming a cooking contractor for bringing the penis aprons to the event. The same month, the Herald Sun reported that Toll’s departing executive received a payout worth over $6 million for his final six months of work, which “came as Toll’s net profit fell 77 percent in the year to June.” Earlier in the summer, Australian Toll workers who move goods for Coles supermarkets struck and blockaded a warehouse. Later in October, the company will hold its annual general meeting.

The union says the negotiations at Toll are being closely watched by other port truckers, including 100 Toll workers at the port of New Jersey who also are directly employed by the company. According to the Teamsters, the election victory at the Port of Los Angeles was quickly followed by mandatory anti-union meetings (known as “captive audience” meetings) for non-union Toll workers in New Jersey. Six months later, Potter said Toll “continues to intimidate them, continues to have meetings with them and basically threaten them about talking to the union.” He added that the New Jersey drivers are “not happy at Toll. But quite frankly, they looked at LA as being the lead. And they’re waiting to see what happens there, and what the results are.”

Michels identified job security as a top issue in the overall industry. She said that port trucking is marked not just by unpredictable scheduling, but by management retaliating against workers by denying them work: “They are afraid they’re never going to work again, because they’ll be assessed as uppity.”

Potter credited the state of New Jersey with improving enforcement against misclassification in the industry, leading to more workers being recognized as employees with organizing rights. But he said that the practice of classifying workers as contractors, in order to shirk taxes and block unionization, remains rampant in the state. “If one of these misclassified workers were to die on the job,” said Potter, “there would be no investigation by OSHA.”

Potter alleged a wave of illegal retaliation by port trucking employers in New Jersey. Potter said one company, Proud 2 Haul, fired workers for pursuing illegal worker’s comp deductions. He said another, Diamond Freight, fired drivers for pursuing their legal rights, but reversed the terminations after their co-workers marched on management and “refused to work.” “The industry is upset that the government wants to enforce the law,” said Michels.  She added that “getting a contract at Toll that sets standards” will be “very important” for campaigns elsewhere.

“Our fight at Toll is also about changing the system of abuse at the ports,” said Urrea. “We want to help our brothers at the other ports gain the same rights that we’re fighting for. We won’t back down until all workers are treated the same.”