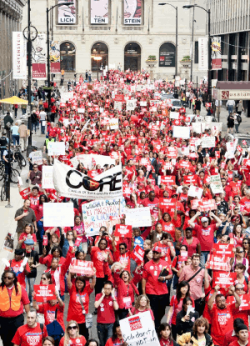 Inspired by CORE--the progressive caucus that led the Chicago Teachers Union strike--a social-justice group within the Newark Teachers Union is fighting for a better contract deal.   (Photo by CORE)

NEWARK—Six days after the city’s schools superintendent and teachers' union president announced a tentative contract agreement, a group of union members gathered Wednesday night to discuss how to derail the deal.

The agreement, whose core compromise institutes performance-pay bonuses and peer evaluations, won praise from both New Jersey Republican Governor Chris Christie and American Federation of Teachers President Randi Weingarten. But members of Newark Education Workers (NEW) Caucus, a Chicago-inspired social justice group within the Newark Teachers Union (NTU), hope that on Monday, their co-workers will vote it down.

“They say it’s the best contract we’re going to get,” NEW Vice Chair Branden Rippey told the 50-some NTU members gathered at American History High School Wednesday night. “They say they’re visionaries" and that the deal will "help teachers move in the 21st century, it’ll help give us this great, new, sleek, more efficient, more kid-friendly thing that’s going to help us be better teachers.” However, said Rippey, “This is a horrifyingly bad contract.”

Interviewed Thursday, NTU President Joe Del Grosso attributed such criticism to ignorance and dishonesty: “A lot of these people haven’t participated in unionism long, and really don’t understand the rules and regulations." Noting that NEW plans to oppose his re-election, Del Grosso said, "If you would lie to people now, what would you do if you’re in office?”

As I reported Monday, Newark teachers have been working under an expired contract for more than two years. Under the proposed agreement, a portion of teachers’ compensation would continue to come as annual “step increases” based on experience and paid through taxes. But other compensation will be paid out as performance bonuses, funded by a donation from Facebook founder Mark Zuckerberg and distributed based on a combination of student test scores, management evaluations, and a new system of peer review. In an interview with Working In These Times last week, Weingarten said the deal represents “a system of the future.”

The contract was shaped by Newark’s new education law, passed in August, which weakened job security for teachers who receive two consecutive poor evaluations. Del Grosso said he supported that law on the condition that it included an option for union contracts to incorporate peer review into the evaluation process, as the Newark agreement would do. English teacher and NEW Chair Leah Owens said NTU was wrong to support the law: “They should have spoken up to make the story clear, that we’ve always been evaluated…this new evaluation system that’s not research-based, has not been properly piloted, they should not have been for that at all.”

"The reality is," Rippey said after Wednesday's meeting, "we're fucked on many different levels with this." NEW members say that by providing just one step increase for the time since the annual increases were frozen in 2009, it undervalues their work and sets back their wages for the rest of their careers. Del Grosso counters that the lump sum retro payment exceeds the wages lost so far since the contract expired. NEW members say NTU should have used the contract fight to address issues of class size and segregation, even though though the school district isn't legally required to negotiate over them. Del Grosso says that criticism smacks of of inexperience. NEW warns that the new deal’s “turnaround schools” provision hurts students by paving the way for more charters; Del Grosso said the turnaround option offers a better alternative to charters.

NEW leaders described the deal’s central compromise—labor gets peer review, management gets performance pay—as a craven concession. They expressed concern Wednesday that its creation of multiple salary tracks would increase division within the union. NEW notes that under language in the new contract, final authority over evaluations and discipline still rests with the superintendent.

Del Grosso acknowledged this is true, but said the superintendent would now have to consider suggestions from teachers on the evaluation committee. He says peer review “may be only one small step for Newark, but I think it’s one giant step for teachers.”

At last week’s press conference, Del Grosso vouched for Superintendent Cami Anderson’s judgment, sharing an anecdote in which she asked for his advice about how to handle a disciplinary situation involving a different union: “I have a lot of confidence that when she hears the feedback, she’s going to be looking at it, and she’s going to be fair.”

Rippey disputed AFT’s and NTU's claim that the new wage system, because it’s only partially evaluation-based, and its evaluations are only partially test-based, is not “merit pay.” Rippey, a history teacher, sats union leaders are using “euphemisms” to defend a system that is “slightly less bad” than solely test-based merit pay, but “not very good.”

Wednesday’s NEW meeting followed a much larger meeting held by NTU leadership the day before. Several NEW members voiced frustration about the Tuesday gathering, accusing NTU leaders of offering vague answers to their questions, and of trying to scare workers into ratifying the contract by suggesting that a “No” vote would mean an immediate strike.

Del Grosso said the meeting had been “spirited,” but charged that NEW “monopolized” the two-hour session rather than leaving time for “people that just came to try to hear an explanation of the contract.” He denied that he had said voting no would force a strike: “I said that is an option that’s left to the membership.” He accused NEW of being too eager for a work stoppage: “They had some signs there that we should follow Chicago’s lead, other things of that nature…I think that’s very dangerous…Strikes aren’t legal in New Jersey.”

After members discussed their concerns over the proposed contract and their reactions to Tuesday’s meeting, Wednesday’s NEW gathering turned to next steps: recruiting co-workers to join the organization, marching next month in opposition to school closings, running a full slate of candidates against the current NTU leadership in the May election, and – most immediately – organizing fellow teachers to vote “No” on Monday. “Our social relationships with our people,” teacher Akili Buchannan told fellow NEW members, “are as important as our ability to explain complex issues clearly.”

NEW has roots in a previous organization, Teachers as Leaders in Newark, and in an unsuccessful 2010 effort to oust incumbent members of NTU’s executive board in internal elections. (The effort, which organizers say was hastily organized, garnered under 400 votes, versus about a thousand for the incumbents.) Its activities include a study group that cover topics like “Cities and Suburbs in U.S. History” and “Education ‘Reform’: Its Beginnings, Other Ways.” Rippey said that when NEW was formally created last year, the use of the word “workers” wasn’t just for an acronym's sake: “Until teachers realize that just because you have a college degree, does not take you out of the working class – until they realize that, we’re in a lot of trouble.”

NTU’s contract covers 3,100 Newark education workers. According to NEW, about 400 of them are on the organization’s e-mail list, and about 100 have attended at least one meeting.

NEW activists say they’ve drawn inspiration by their counterparts in the Congress of Rank and File Educators (CORE), a reform caucus which ousted the incumbent leadership of the Chicago Teachers Union (CTU) in 2010 and mounted September’s teachers strike. (As James Cersonsky has reported, a CORE-inspired caucus is also organizing in New York). Newark teacher Avram Rips called CTU’s activism “a game-changer” and “a great model for future contracts if we ever come to power.”

Del Grosso said he was “pretty confident” that the contract will win majority support on Monday (or Tuesday, if Hurricane Sandy forces a delay). NEW's Owens expressed less certainty. She said that at Tuesday’s NTU meeting, “people were upset, and they were confused, they had a lot of questions.” But she worried that after years without a raise, facing the pressure of holidays and student loans, some will “ultimately go, ‘This is the best we can do.’ So honestly, I don’t know.”