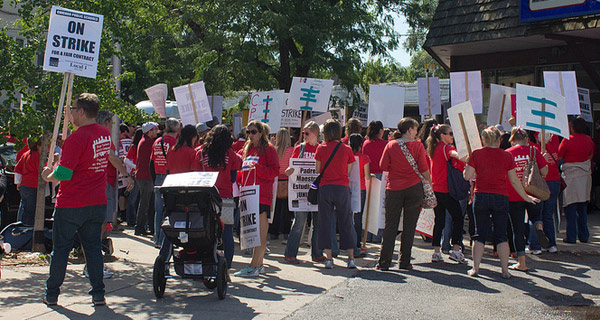 Jerry Tucker's time of advocacy is over, but the organizing strategies he pioneered are still very much alive in movements all over the country. (Brad Perkins / Flickr / Creative Commons)

In January, an obituary of Jerry Tucker, who died of pancreatic cancer a year ago at age 73, characterized the longtime labor activist as “the man who could have saved organized labor.”

Tucker might have balked at the suggestion that he himself could have been the savior of organized labor. He fervently believed that workers could save themselves—through democratic, militant unionism led by rank-and-file members. Earlier this month, Tucker’s vision was remembered and debated in his hometown of St. Louis, Mo., as about 100 unionists from throughout the country gathered at the “Jerry Tucker: The Person, The Mission, The Legacy” conference at the University of Missouri-St. Louis.

The conference’s program spanned the innovative and successful union campaigns Tucker helped design and lead as well as similar union campaigns today. Throughout the weekend, panelists spoke about his insistence on making the labor movement a force that advocated for the entire working class through coalition-building with community groups; his time as a dissident within his own union, the United Auto Workers (UAW), with his challenges to leadership to become more democratic and to end collaboration with corporations before becoming persona non grata within it; and the centrality of confronting sexism and racism within unions.

A life on the barricades

After a night of personal remembrances of Tucker, the conference included two days of panel discussions by union activists, many of whom worked alongside Tucker, discussing different campaigns he helped design and their relevance for unions today.

One of Tucker’s first major victories came in 1978, when he headed efforts against a business-led ballot referendum to bring “right-to-work” to Missouri. Mike Cannon, Tucker’s longtime assistant at the UAW, recalled on a panel discussion on the conference’s second day that labor waited until the last minute to fight the campaign, just three months before a vote. But Tucker quickly “pulled out all the stops,” Cannon said, overseeing efforts to create a massive anti-referendum coalition with women’s, environmental, senior citizens’, civil rights, consumer, and even farmer groups. More than 100,000 new voters were registered, Cannon said, and 24,000 volunteers phone-banked and knocked on doors throughout the entire state.

“His vision led us to victory in 1978,” Cannon said. The state remains free of the law today, though the Right may again attempt to pass the law in the near future.

Throughout the 1980s, working for the UAW’s Region Five, which spans 17 states in the West and Southwest, Tucker became a key strategist in pioneering winning worker-led tactics like “work-to-rule.” Employers during this era often attempted to provoke workers into striking during contract negotiations, assuming they could take advantage of labor law allowing for permanent replacement of strikers by “scabs” to crush unions. Instead of walking off, however, workers employed the “work-to-rule” strategy of staying at work and following company regulations to the letter without doing anything beyond what was required of them—leading to significantly lessened production while not technically breaking any rules.

Cannon’s plant at the time, the Moog Auto Plant in St. Louis, resisted striking in 1981—the same year President Ronald Reagan fired striking air traffic controllers—and ran a tight work-to-rule campaign. Eventually, “the company basically said, ‘we have no control over our production process whatsoever,” Cannon remembered. “We have no idea what’s going on in our own plant. What will it take [to settle with the workers]?” Moog had set out to destroy the union; instead, workers won a 36 percent raise over three years and benefit increases.

In 1993, Tucker helped run a similar campaign at the A.E. Staley corn processing plant in Decatur, Ill., where workers were locked out for two years in one of the key labor battles of the 1990s. Art Dhermy, a former Staley worker, described on a panel how the tactic Tucker helped design empowered him as a rank-and-file worker.

“I saw the light at the end of the tunnel. I could do something. Me, the guy sitting on the [factory] floor,” Dhermy said.

Workers like Dhermy were at the center of the Staley work-to-rule fight, coming up with strategies, organizing rallies, building support committees throughout the country, and conducting company research themselves.

At the same time Tucker was advising workers at Staley, however, his own former union, the UAW, was attempting a work-to-rule strategy at an embattled Caterpillar plant in Decatur. Though Tucker was an expert on the tactic, he was not asked to advise the campaign, because his challenges to UAW leadership in the years before had made him a pariah within the union.

While on staff at the UAW District 5, Tucker and other union dissidents created a reform caucus, New Directions, to run for the district’s leadership in 1986. He opposed what he saw as the collaborationism and top-down character of the union’s leadership; staff positions provided “nice rocking chair opportunities,” he said in 1992, while “workers ... are paying the price.”

Recounting the history of the caucus on a panel titled “Lessons from the New Directions Movement,” Eric Mann, director of the Labor/Community Strategy Center in Los Angeles, described New Directions as pushing “union democracy in the middle of a dictatorship.” Illegal maneuvers by the old guard during leadership elections at the 1986 union convention led to Tucker’s slate losing; a drawn-out legal battle eventually found the old guard guilty of wrongdoing, and the election was rerun, with New Directions’ nominated leaders winning.

According to Tucker, UAW’s president at the time, Owen Bieber, refused to shake his hand upon his installation as District 5 director; instead, he immediately informed District 5 staff “that they weren’t to take orders from [Tucker]—that they worked for him. And he would assure them that he would aggressively campaign, as he expected them to do, to remove [Tucker] at the following convention.”

True to Bieber’s word, the incumbent leadership pulled out all the stops at the next union convention, and Tucker was defeated. Though Tucker ran a largely symbolic failed campaign for UAW president soon afterward, he had become an outcast within the union.

Though Tucker was ousted from the UAW more than twenty years ago, his style of bottom-up, militant unionism may still be a threat to some figures in the labor movement. On the conference's final day, Bill Fletcher, a longtime union activist and a close friend of Tucker’s, claimed that before the conference began, there were some efforts by union leaders to derail the conference in its nascent stages, though he did not indicate who had made the threats.

“There were people that were deeply worried that Jerry’s life and work would so resonate among the current and upcoming generations,” Fletcher said, “that people may say the existing or dominant form of trade unionism is bogus, and needs to be challenged, and we need to do something different. And these demons felt so strongly about it that they were willing to try to strangle this conference to make sure it didn’t get off the ground.

“It was at that moment that I realized that Jerry was very much still among us,” Fletcher said. Conference organizers declined to comment on the alleged threats.

Indeed, it became clear soon into the conference that Tucker’s life had a huge impact on past and present unionists throughout the country. Though his time of advocacy is over, the strategies he helped develop and the vision of union activism he fervently believed in are still present in some contemporary worker-led campaigns.

Rasheen Aldridge, a 19-year-old St. Louis Jimmy John’s worker who walked off the job along with other St. Louis fast food strikers this May and received a scholarship in Tucker’s name, spoke on the panel “New Voices, New Forms of Organization: Continuities and Change.”

And in a panel on the conference’s last day, Chicago Teachers Union financial secretary Kristine Mayle noted that the on-the-job militancy and organizing alongside community members that Tucker advocated for was also being carried out by Chicago teachers.

"I didn't know who Jerry Tucker was coming here, but I'd swear there must people within our union who did,” Mayle said. “Because everything I heard yesterday [during sessions on Tucker’s life] is what we're doing in Chicago.”

A central belief of most of the conference’s attendees was that Tucker’s activism was a bright spot during particularly dark days of American labor history. At a time when the rest of labor was on the retreat, pushing collaboration with bosses as the only way to weather the storm of post-1970s deindustrialization, Tucker ratcheted up the level of struggle. As labor increasingly became what Tucker called parochial and narrow-minded, focusing only on the concerns of its own workers, he pushed for a labor movement that represented the entire working class. And when the top-down style of American union leadership skyrocketed, Tucker worked to build rank-and-file worker-led power, refusing to back down from confrontation even with leaders of his own union, which eventually led to his own exile. He deserves to be remembered alongside Mother Jones, Big Bill Haywood and other radical American labor heroes of years gone by.

Today, as the movement teeters on the brink of extinction, similar bottom-up, militant organizing might be the only thing that can save organized labor.

The International Union, United Automobile, Aerospace and Agricultural Implement Workers of America (UAW) is a sponsor of In These Times.