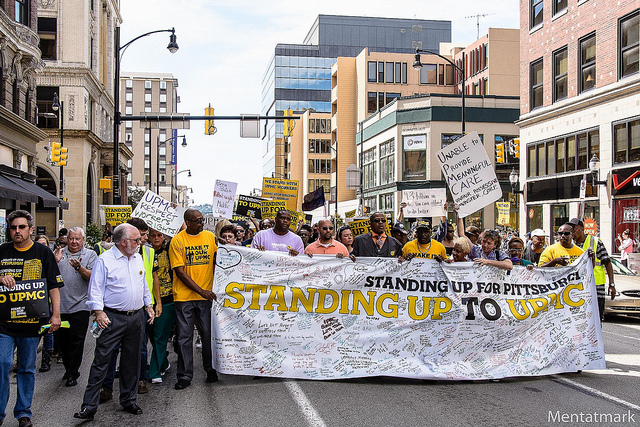 In a major victory for workers, a judge has ruled that the University of Pittsburgh Medical Center engaged in illegal anti-union behavior. (Mark Haller / Flickr)

If you’d like a sense of what a boss’s campaign to try to destroy a union looks like in the 21st century, take a look at a recent NLRB decision against the University of Pittsburgh Medical Center (UPMC).

On Friday, a judge with the National Labor Relations Board (NLRB) ruled that the UPMC has engaged in a series of discriminatory practices against workers who have been trying to organize a union since 2012.

In the wide-ranging 123-page decision, one can see how a sophisticated anti-union campaign is run. The decision outlines in detail how the multi-billion dollar Pittsburgh hospital chain repeatedly violated the law in order to sow fear of organizing. Employees were surveilled and photographed, interrogated and threatened with discipline and arrest. Four were fired.  The decision also found that UPMC helped create and support a “company union”— an employer-dominated labor organization—in violation of federal law.

With more than 20 hospitals, 400 outpatient sites, more than 62,000 employees, and a health insurance division that had $10 billion in operating revenue in 2013, UPMC is the largest private sector employer in Pennsylvania.

In 2012, the nonclinical support staff at two of UPMC’s hospitals began an organizing campaign through the Service Employees International Union (SEIU), which would include approximately 3,500 workers. The employer began violating workers’ rights almost immediately, launching an anti-union campaign that often straddled the line between legal and illegal.

In addition to the captive audience meetings that have become a standard (and legal) anti-union practice—in which the employer explains in no uncertain terms that it is against the employees organizing—UPMC sought to create an environment of fear and intimidation. The hospital chain posted a document on its internal website called “UPMC Cares,” which contained sections such as “Why Unions Aren’t Necessary.”

When the organizing drive began, UPMC placed screensavers on employees’ computers throughout the hospital which scrolled through anti-union messages such as “You can say NO to the SEIU. It’s your right”; as one walked around the hospital, idle computers displayed in all caps, “NO” and “SEIU.”

Though these practices are technically legal, employees cannot miss the overwhelming message that their employer does not agree with their right to unionize. The judge found that while the behavior was legal, it was proof of the employer’s open opposition to the union, which provided context for the other illegal activity that the company engaged in like firings as a result of union activity.

The company also created what it called the Environmental Support Services Employee Council (ESS), which the NLRB judge found to be an illegal company union. Though the company tried to argue that the ESS was an employee-run organization, the judge found that the company was pulling the strings. UPMC made the decision to create the group, helped write the group’s bylaws, solicited volunteers to participate, determined the date and time for meetings, provided the facilities, and offered information and assistance.

The judge also found that the group constituted a union, because it dealt with terms and conditions of employment—which is reserved for labor organizations. The ESS continued a long tradition of company unions that were prevalent in the late-19th to mid-20th centuries, where companies would establish these employer-friendly labor organizations to temper workers’ demands.

While supporting the company union, UPMC made it clear that workers could not engage in any real union activity. UPMC engaged in surveillance of the employees’ private conversations, told them that they could not talk to union organizers even on their own time and threatened to arrest employees who were engaging in lawful union activities. For example, when employees were meeting union organizers for lunch at the hospital cafeteria, hospital security demanded to see everyone’s identification and then called 911 to have the police escort them off the premises. The cafeteria is open to the general public, which means that anyone could meet there for any reason—except to discuss labor organizing, which is a clear form of discrimination.

On a day-to-day basis, UPMC engaged in threatening behavior to any employee who had the nerve to lawfully support the union. The judge also found that UPMC interrogated employees about their union activities and threatened to fire them if they refused to answer. Managers approached employees who were lawfully wearing union insignia and reminded them that their evaluations were coming up while staring pointedly at their union buttons and lanyards. This practice had the desired effect of warning employees that their evaluations would suffer as a result of their support for the union.

These threats were not idle. During the course of the organizing campaign, UPMC fired four workers for supporting the union. One of these workers was actually fired twice: He was reinstated after a settlement between UPMC and SEIU, only to be fired again a short time later for still supporting the union. The judge found all of these terminations to be illegal, and ordered that the workers be reinstated and receive back pay.

Having found that UPMC “engaged in such egregious and widespread misconduct so as to demonstrate a general disregard for employees’ statutory rights,” the judge issued a broad order requiring UPMC to cease its illegal activity. The judge mandated that his order be read to UPMC’s nonclinical staff who have been trying to organize and that it be posted for 60 days.

This case represents a major win for the workers trying to organize at UPMC. However, the Board should go one step further and seek a 10(j) injunction in federal court.

These injunctions, designed to stop bosses’ egregious or repetitive illegal behavior, are enforced in federal court rather than the slower and less powerful administrative process, which means that the workers could receive immediate relief if UPMC follows its pattern of disregarding the workers’ rights.

The NLRB General Counsel has repeatedly issued memos affirming that 10(j) injunctions are appropriate in cases that involve discharges during an organizing campaign. “The touchstone is always whether there is a threat of remedial failure,” noted a memo from the counsel this year.

The details of the judge’s decision illustrate a textbook pattern of this “remedial failure,” with UPMC continuing to engage in discriminatory conduct even when a settlement was in place with the union. If the General Counsel chooses to take this judge’s decision and then seek a 10(j) injunction, it would let employers know that the law has teeth and they cannot openly disregard workers’ rights. More importantly, it would provide the workers at UPMC, who have repeatedly suffered discrimination in the workplace, a major tool to push back.

Update: In response to the NLRB judgment, UPMC sent a special, brief single-story edition of UPMC Extra!, its in-house newsletter, by email to all UPMC employees. "We are disappointed by the administrative law judge's decision, and disagree with his findings," the hospital stated. "We believe the record fully supported our actions with regard to under-­performing employees and failed SEIU organizing efforts in which our employees have shown little to no interest, despite their three­-year public and legal campaign against our hospital."

The statement then quoted conservative federal judge Arthur Schwab, stating that the "NLRB has become “the litigation arm of the union, and a co­participant in the ongoing organization effort." UPMC said it "will explore all of our legal options to fight this unfair decision."