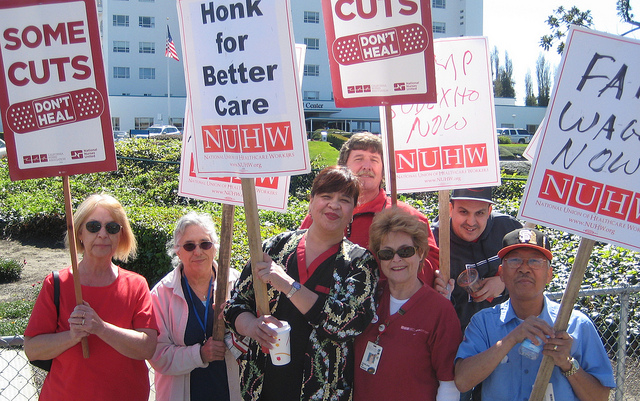 Around 2,600 therapists, psychologists, and social workers represented by the National Union of Healthcare Workers in California (NUHW) began a weeklong strike this Monday to protest inadequate care for their patients due to what they say is understaffing at Kaiser Permanente medical centers throughout the state.

They will be joined this week by another 700 Kaiser workers who report similar issues at almost three dozen strike locations where picketing will be taking place. Kaiser is the largest HMO in California and the state’s largest private provider of mental health care.

The picket lines are the latest escalation by workers in a conflict that has seen an uptick in activity since 2011 when NUHW began efforts to push the California Department of Managed Health Care (DMHC), the state’s health care regulators, to fine Kaiser for their violation of “timely access” state laws. The $4 million penalty was handed out in 2013 and was the second highest fine ever imposed by the agency. The laws require HMOs to provide care within 10 business days for both initial and follow-up treatment appointments. According to the regulators, as many as 60 percent of appointments at various Kaiser clinics observed during its period of assessment were outside of what is considered adequate wait time.

But Clement Papazian, an Oakland-based Kaiser employee in psychiatric emergency care who acts as the union’s mental health clinicians Northern California district president, says that DMHC’s report only focused on initial diagnostic appointments at Kaiser clinics. “Rather than increase staffing, [Kaiser] actually shifted resources so now it’s easier for patients to get a diagnostic appointment, but they end up having to wait weeks and even months for treatment appointments,” he says. “It creates an unsustainable care system for patients and providers.”

Papazian says lengthy periods of waiting occur because “Kaiser doesn’t staff the psychiatry departments with enough psychologists, therapists and social workers to handle the caseload. There aren’t enough of us to provide the timely and adequate care that patients seek when they come to see us.”

Despite Kaiser’s claims of a 25 percent increase in staff between 2011 and 2014, NUHW claims that data from Kaiser reports suggest that the number is actually closer to 10 percent. The mental health workers at NUHW argue this increase is not enough, especially when considering what they say is Kaiser’s large-scale failure to prepare for a significant influx in membership growth due to the Affordable Care Act. In just the first nine months of 2014, Kaiser added over 420,000 people to its membership.

Tom Meier, the treasurer and senior vice president at Kaiser, told the San Francisco Business Times last year that sign-ups through Covered California, the state’s ACA health care marketplace, accounted for three-quarters of membership growth throughout the year.  This growth far exceeded the approximately 100,000 people it budgeted for.

“The reality is that Kaiser has not been able to treat all of the mental health patients it was already responsible to care for,” explains Papazian. “Our issues with them predate the Affordable Care Act, and we knew that ACA would be a goldmine for Kaiser, [enabling them] to enroll thousands of more members,” he says.

2014’s profits were a reported $3.1 billion, according to Kaiser officials—a 40 percent increase from the previous record-breaking year and another incremental figure to contribute to the total $14 billion that Kaiser has made since 2009.

Regarding average wait time for appointments, Nelson says, “Each patient’s situation is evaluated and treated individually. Just as it is with other types of health care, depending on the case, a patient may need to be seen again individually the same day, the next day, in a week, in two weeks, or in a month or longer—there really is no such thing as an “average” time for additional visits or an average range of additional visits.”

The DMCH report that led to Kaiser’s 2013 fine cites that regardless of any calculation of average wait time, “[Kaiser]’s methodology for monitoring appointment wait times relies on averaging all reported wait times for a given month. Although calculating the Average Days Wait may provide some insight into the overall monthly trend, the Plan’s methodology does not account for each enrollee’s wait time individually, and may mitigate or hide excessive wait times by averaging them with shorter wait times,” leading the agency to conclude that the HMO was therefore violating regulatory standards.

Kaiser’s alleged combination of understaffing and unplanned-for patient growth has led NUHW to bring legal action against the HMO in order to block any further participation in Covered California. In 2013, NUHW filed motions against Covered California in order to force it to follow laws requiring HMOs to be in good standing before being able to enroll new members through the state’s health exchange. Papazian says the lawsuit is still active and ongoing.

Jim Clifford, a psychiatrist-therapist from San Diego and NUHW member, remarks that while there is a chance that many previously uninsured individuals will be off of Kaiser’s rolls in the near future because of the pending legal action, striking workers have an obligation, as mental health professionals, to be advocates for their patients so they receive high-quality care.

“ACA was the largest single increase in coverage, as far as we know, in history. While we’re glad obviously to see more people get coverage, we expect Kaiser to not only increase staff but also make investments in psychiatric facilities,” says Clifford.

Although Kaiser spokespeople suggest that there is a “shortage” of qualified clinicians to hire, Clifford reasons that any perceived shortage “has to do with the discrimination, as we see it, against psychiatric patients” they will potentially be treating. He added that finding applicants is difficult “when they know [the clinic is] going to be overloaded with patients and that Kaiser will be attacking their wages and benefits.”

Union leaders have proposed “clinician-management committees” at each facility to ensure that union members have a say in hiring practices, but members say these suggestions have not fared well at the bargaining table. Kaiser would not respond to the specific proposal, with Nelson commenting, “Out of respect for the bargaining process, we don't discuss publicly what occurs at the bargaining table.” This past weekend, as negotiations appeared to be going nowhere, the union focused on strike confirmation.

As soon as the strike was announced Nelson remarked in a press release published on Kaiser’s official website that “since its creation in 2009, [NUHW] has never negotiated a contract with Kaiser Permanente. In fact, NUHW stands alone as the only union that has been unwilling or unable to reach a fair agreement concerning a contract covering our employees during that time.”

When asked about Nelson’s comments, Clifford replied, “We believe that by rejecting their proposal, we are rejecting a broad strategy that they have made very clear to us while across the bargaining table: … that they want to eliminate benefits for all employees at Kaiser. And they are starting with us.

“We agree with Kaiser in that we are the only union at this point that has been unwilling to accept their contract offer. And we are proud of that.”

According to Clifford, Kaiser has been seeking daily meetings with union leadership since the start of the strike—a marked change from the monthly meetings that Clifford says Kaiser management did “not take very seriously”.

In addition to this week’s strike, which will end on January 19, Kaiser’s headaches could be compounded when more than 18,000 Kaiser nurses represented by California Nurses Association/National Nurses United participate in a two-day strike on January 21-22, a walkout that will affect all 86 of Kaiser’s hospitals in the state over staff and economic issues similar to the ones faced by NUHW.

The HMO will also be receiving another report from DMHC at the end of January, which may result in a fine for Kaiser even larger than 2013’s $4 million penalty. Papazian says that this “one-two punch” will leave Kaiser with an unprecedented amount of pressure to change.

“Kaiser could anticipate these findings to begin the process of making change and including the marriage-family therapists, social workers and psychologists into the staffing decisions that need to be made,” he says.