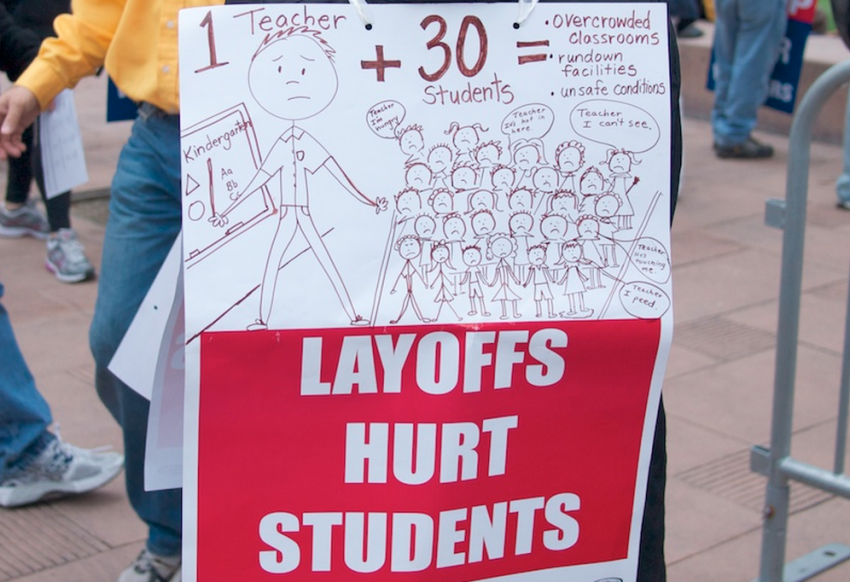 Like the Chicago Teachers Union in 2012, LA teachers have framed their strike around issues of educational equity for public school students. (bpbailey / Flickr)

Los Angeles may be close to its first teachers strike in 26 years after its school district and the local teachers’ union declared that they would be unable to make progress on contract negotiations. Consequently, later this month California’s state labor board for public employees will be mediating between the two sides in the first of several sessions scheduled thus far.

United Teachers Los Angeles (UTLA), a union representing over 35,000 teachers in the area, is working under terms of a contract that expired in 2011 but still remains in effect. Negotiations for a new contract began last July upon the swearing-in of President Alex Caputo-Pearl. Caputo-Pearl is a member of the Progressive Educators for Action Caucus, which joined with other groups to form a slate, Union Power, that ran successfully on a platform of aggressive organizing based on community and member engagement, modeling its vision on the mobilization of the Chicago Teachers Union by its Caucus of Rank-and-File Educators.

Scott Mandel, a union representative and Los Angeles Unified school district teacher of 30 years, tells In These Times that the union's previous leadership had “refused to confront the district,” but the union’s new leadership was “absolutely proactive” as it gained power of the second-largest teachers’ union in the country.

“[New leadership] started a campaign of organizing that was basically unheard of for years and years before. They have done more in the last eight months than UTLA has done in the last eight years in organizing,” Mandel says. “We are now getting to the point where people are proud to be UTLA members again.”

Under the “Schools LA Students Deserve” banner, UTLA’s new contract campaign outlines demands for salary increases meant to make up the real overall reductions that stem from rank and file taking unpaid days off at the behest of the district in the midst of the recent recession as well as the lack of cost-of-living-based pay increases in as many years.

Another pivotal part of the “Schools LA Students Deserve” is class size. According to data released to school administrators by LAUSD Superintendent Ramon Cortines, nearly 2,700 Middle and High school classrooms across the district have over 45 students as of January 29.

Luis Blazer, a math teacher at Rancho Dominguez Preparatory School, says via email, “My biggest concern is that it is not just one class of 45 students. It is five classes of 45 students. Two-hundred twenty-five students to grade, support, give constructive feedback, differentiate instruction for, inspire and guide.”

The union is seeking hard caps for class sizes and the dismantling of emergency law district powers that allow the district to control these caps.

In an interview with In These Times, UTLA President Caputo-Pearl says the “Schools LA Students Deserve” initiative is built on educating their workers and parents in the community through an unprecedented local effort to have teachers meet with parents as organizers who are supported and trained by the union.

“We’ve got about 150 parent liaisons—teacher members who are now parent liaisons—at about 150 of our schools across the city doing regular work engaging parents about what their priorities are, but also engaging parents around what the ‘Schools LA Students Deserve’ campaign is about and how parents can be involved,” Caputo-Pearl says. He characterized these efforts as “school by school and on the ground.”

The UTLA President said that the union has additionally partnered with UCLA’s Institute for Democracy, Education and Access for monthly gatherings with 15 prominent community organizations in the city that deal with inequity issues in the classroom. “Those are going very well in terms of developing a common agenda around racial justice and educational justice,” Caputo-Pearl says.

UTLA is mounting this organizing while simultaneously working in local city elections. Early last week, Los Angeles had a primary election where three school district board seats were up for grabs. Significant monetary attention was placed on the race between the union-favorite incumbent Bennett Kayser and his challenger Ref Rodriguez, a charter school chain founder, turning the election into a proxy fight between union forces and charter school advocates.

According to campaign finance filings provided by the Los Angeles City Ethics Commission, the money poured into the two candidates’ campaigns by outside sources outnumbered financing for other school board races ten-to-one. Further examination of these finance filings, however, reflects how much of an uphill battle the race was for the union.

A political action committee for UTLA was able to contribute to Kayser a total of $480,645. In comparison, California Charter School Association, an industry trade group, put forward $812,578 towards Rodriguez’s campaign via its own PAC.

The outspending of UTLA by CCSA is not surprising in light of it’s all-star cast of supporters. The Los Angeles Times reports that since September of last year, the PAC counted on the following as donors: “Netflix Chief Executive Reed Hastings ($1.5 million), former New York Mayor Michael R. Bloomberg ($450,000), Jim Walton of the Wal-Mart founding family ($250,000) and local philanthropist Eli Broad ($155,000).”

But the war-chest behind Rodriguez, as well as that of incumbent school board member and fellow charter school advocate currently running for re-election, Tamar Galatzan, was not enough to stave off a union upset.

Last week’s primary results set the two candidates up for runoff elections in May, offering the union a foothold on a school board that presides over 140,000 public charter school students, the highest enrollment figure in the nation by far, according to 2013 figures.

With California already dead last in per-pupil expenditures among all states, the LA school district’s large number of charter school students eats away at potential funding available for the public school system. These limited financial resources are exactly the reason the district has thus far been reluctant to meet the demands of UTLA and the “Schools LA Students Deserve.” Caputo-Pearl claims that district finances have been been impacted negatively by a “Walton Foundation-funded mindset that running schools and public services like a business is the way to go.” The Waltons, owners of Walmart, have been key funders of the corporate school reform movement around the country.

UTLA is currently negotiating with interim Superintendent Ramon Cortines after mounting the challenge that led to the resignation of his predecessor John Deasy. Protest over Deasy’s leadership centered on a failed $1.3 billion plan to bring an iPad to every student in the district, a plan that has recently resulted in a federal grand jury investigation over its questionable bidding process. Pearson, a testing software maker, is being named as the alleged fixed benefactor in Deasy’s efforts to comply with the technological aspects of state Common Core.

“They spent millions of dollars on testing. Those iPads are not used in the classroom. They’re not accessible to kids. They’re used only for testing. If you need to use a computer lab, or bring in a computer cart for regular school stuff, you use old computers,” says Mandel. “The modern iPads test the kids only and that is a joke.” He says the controversial iPad plan was also championed by school board member Galatzan, providing additional reason for union opposition in her run-off.

Despite interim Superintendent Cortines’ claims of impending fiscal crises if the union receives what it is seeking in pay increases and class size reductions, Caputo-Pearl says the district will have an unexpected infusion in state funding that will make these demands possible.

“[The governor] put forward a proposed budget in January, which showed that probably LAUSD would be coming in at something like a 10% increase. Since that time, legislative analysts have come in and said that may actually be lowballing it. There could be more money,” says Caputo-Pearl. “The news is getting better, not worse.”

The teachers’ union president says that UTLA will be entering mediation on March 26 with hope of coming to an agreement with the district. He does say, however, that the union will further build its “readiness for a strike” through consistent organizing in case a strike is necessary if the district “continues to stonewall” its needs.

“We strongly feel that not only do schools need funding, but schools also need approaches that are more democratic and rely on parents, and educators, and students to really be involved in school improvement efforts,” says Caputo-Pearl.