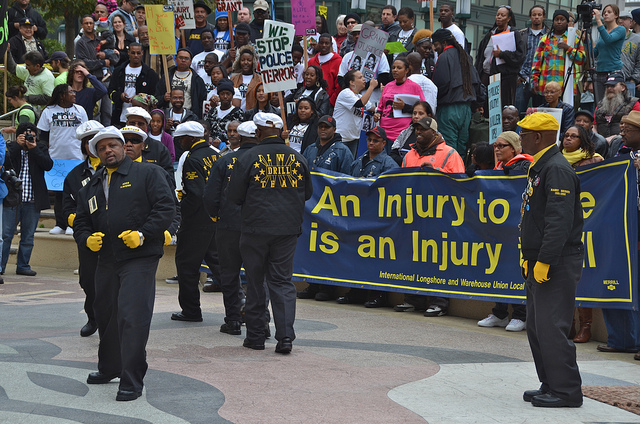 Earlier this month, a video of a white police officer shooting and killing a black man, Walter Scott, fleeing and clearly posing no danger to the cop in North Charleston, South Carolina—like multiple recent videos of unarmed black men being killed by police—went viral. What few know is that his brother is a member of a predominantly black labor union in Charleston—in a state far better known for trying to secede from the Union than organizing one. This union has declared it will protest racist police brutality on May 1, May Day, and called for others to join the protest with actions of their own.

The San Francisco Bay Area longshore union voted to stop work at all Bay Area ports in solidarity. In a sad testament to the ubiquity of such shootings around the country, the walkoff was planned before the police killing of Freddie Gray in Baltimore. But the timing couldn’t be better to demonstrate the power of organized labor to forcefully intervene in policy discussions.

Walter Scott’s brother and several cousins are longshore workers, and their union, International Longhsoreman’s Association (ILA) Local 1422, happens to be one of the most powerful organizations of African Americans in South Carolina. After Walter Scott’s killing, his brother, Rodney, declared, “That was totally cold-hearted murder.”

The members of ILA Local 1422 know all about police repression. In 2000, they challenged shipping companies that tried to shift to non-union labor. When Local 1422 members marched to the docks, hundreds of local and state law enforcement officers clashed with them. In the aftermath, five longshoremen were brought up on trumped up charges. (In These Times covered the story of the “Charleston 5” in 2001.)

Over the next two years, Local 1422 pulled off the nearly unthinkable: beating both the multinational shipping corporations in their efforts to undermine the union and getting the Charleston 5 released—despite the opposition of the state’s entire economic, legal and political powers. In the process, Local 1422 preserved desperately needed middle-class jobs, especially for black people in the Charleston area, while also empowering their community.

Given the union’s familial and historical links, it should come as little surprise, then, that Local 1422 decided to protest the killing of Walter Scott in the most effective way working people can: by disrupting the local—and in this instance, global—economy. Leonard Riley, an African American and leader in Local 1422, stated, “We’re real familiar with police aggression.”

While some might think that the labor and civil rights movements are different struggles, the most progressive sectors of the labor and civil rights movements have long insisted they are two sides of the same coin, as both empower and protect ordinary people from the abuses of the powers that be. Of course, workers in labor unions organize for their own material benefits, but many also fight for social justice.

One such union is the International Longshore and Warehouse Union (ILWU), especially its San Francisco Bay Area chapter, Local 10. The ILWU motto is taken from the Industrial Workers of the World: “An injury to one is an injury to all.” There’s no mention of the word “job” in that phrase, so when innocent human beings get shot and killed by the police—especially as part of a long pattern of prejudice—unions that adhere to that motto’s logic should take those issues seriously.

Local 10 has a storied history of fighting for social justice. Racial equality? The union integrated itself as soon as it was organized in the mid-1930s and became majority-black by the late 1960s.  Gender equality? Local 10 made its name gender-neutral, removing the word “longshoremen,” even though it’s still an overwhelmingly male-dominated field. Apartheid? They refused to unload cargo from South Africa as early as 1962. Fighting fascist states? Some members volunteered in the Abraham Lincoln Brigade on behalf of the Republic against the fascists during the 1930s Spanish Civil War, and many fought the Axis in World War II. Police brutality against African Americans? That’s on Local 10’s radar, too.

Early on New Year’s Day 2009 in Oakland, a young black man named Oscar Grant (who was a union meatcutter) was killed by a local transit officer who claimed he had meant to reach for his taser. Grant was handcuffed and face down at the time. To demand that Grant’s killer be punished, during the officer’s trial Local 10 shut down the Port of Oakland for a day shift and led a rally of hundreds at city hall to demand justice. The people renamed the space Oscar Grant Plaza.

Local 10 stopped work in solidarity with Wisconsin public sector workers when their union rights were stripped in 2011 and refused to unload Israeli cargo ships to protest its attacks on Gaza in 2010 and again in 2014. All the better, then, to address racist police brutality on May Day.

It’s easy to forget in the United States that May 1,1886, was a day in which American workers, including many socialists and anarchists, advanced political demands—then, for the 8-hour workday for all workers—by striking. After tragic events in Chicago’s Haymarket Square, the U.S. Congress decided to officially sanction Labor Day as the first Monday in September, to help us forget our radical history. Mission accomplished. Fortunately, in almost every other country in the world, workers still celebrate on May Day.

This May 1 will see some serious protests against racism and police violence—be they in Baltimore or Oakland. In fact, because ILWU Local 10 has announced it will stop work, the union may have created the space for thousands of protesters from around the Bay Area to join the marches.

Using a provision in its contract, ILWU locals can “stop work” to discuss important matters on and off the waterfront. Local 10’s Executive Board voted to stop work to discuss why “police are continuing to kill unarmed black and brown people across this country.” People are being asked to meet at Oakland Pier 62 for an hour-long rally followed by a march to downtown’s Oscar Grant Plaza.

Such actions, in which unions stop work to make a political statement, are incredibly rare in this era where unions and working people seem and feel so weak. Yet workers, especially when organized in unions, still have power. That’s why economic and political elites still fear unions and workers, even in their weakened states. That’s also why we all must support unions even if not in one. If we fight for them, they can fight for justice in major social and political issues like police brutality.

On May Day, dockworkers—most of them African American—will shut down the ports of the San Francisco Bay Area and protest police brutality in Charleston, declaring #LaborAgainstPoliceTerror and #BlackLivesMatter. As thousands join these protests, the longshore workers' actions will demonstrate yet again that the power is in workers' hands.