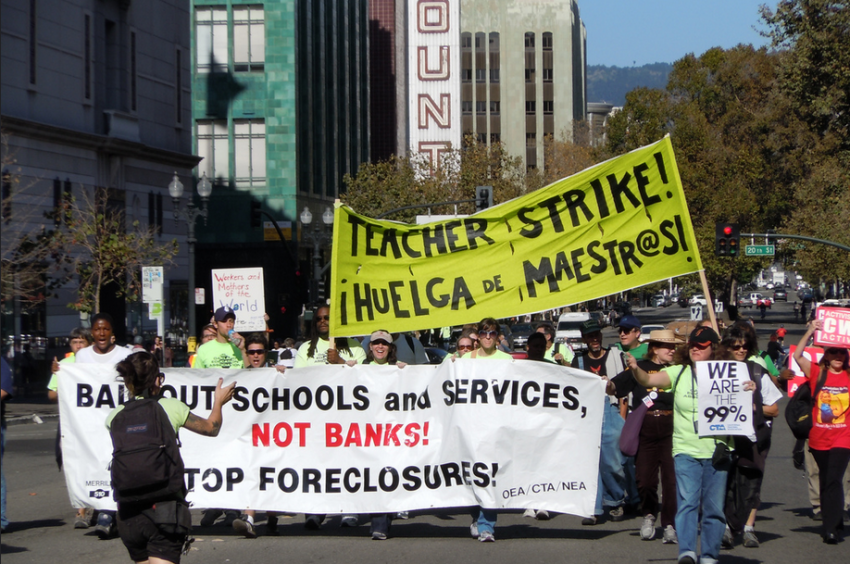 Public school teachers with the Oakland Education Association (OEA) voted last week to authorize strike action if the union’s executive board cannot come to an agreement with the Oakland Unified School District (OUSD) in its year-long bargaining for a new contract.

A central sticking point in the negotiations is over salary increases, which teachers say are so low that they hurt the district’s faculty retention rate. A 2013 report by an Alameda County Grand Jury cites that “approximately 13% of Oakland’s teachers leave the district each year, which is about twice the state average, and 70% leave within the first five years.” The union says that this low retention rate stems from an average pay rate that sees OUSD teachers earn $12,000 less than peers elsewhere in Alameda County.

“Every teacher that I’ve talked to, every mentor that I’ve had, has urged me to find a job outside of Oakland, or at least suggested I consider other district, because of the pay issue,” says Valerie Lines, a third-year first-grade teacher at Montclair Elementary. “They talk about what is best for a teacher as an individual—buying a home, settling down, starting a family. The advice that is coming through most frequently is, ‘Oakland Unified is not the best place [for that] in the long term.

“Teaching needs to be a long-term profession everywhere, and not something where you get your three years of training and then move on to some district that pays better,” Lines says.

OEA union president Trish Gorham said last year that OUSD district officials have only agreed to a total pay increase of 3.25% since 2003. According to 2014 findings by the National Council on Teacher Quality, out of the 125 largest school districts in the country, OUSD ranks 120th in a comparison of starting/ending salaries and lifetime salary, adjusted for cost of living. The report claims that it would take over 30 years for an Oakland teacher to reach a salary of $70,000.

Approximately 700 of the union’s 2,400 members participated in the vote, with 93% voting in favor of the act. California’s collective bargaining process ensures that a potential strike will not occur until at least the start of the 2015-2016 school year.

Gorham said in a statement, “The members have clearly stated that, while we hope for the best, we need to start preparing for the worst now and not wait to the very end of the school year.”

As of the latest bargaining session last week, both parties had agreed on firm counselor-to-student ratios and improved benefits for substitutes, but still remain in conflict over district proposals to handle its own hiring, void of any seniority rules, when transferring displaced teachers. Additionally, the union has made clear its desire for class size caps in special education: Gorham claims “some [teachers] are teaching as many as 18” students.

But a large portion of contract negotiations have centered on teacher pay. While the two sides have conceptually agreed on higher salaries for teachers who take on students over regular class size caps, the two sides remain significantly far away from one another on the issue of salary increases: the union wants 14-17% while the district has proposed 10.5%.

While dealing with the pressure of teachers’ strike authorization, the district is simultaneously facing so-called “work-to-rule” actions at over 40 of Oakland’s 86 school sites, where teachers are limiting their work to instruction only, leaving all after-school activity such as grading and extracurricular activities aside until they receive what they consider acceptable contract proposals.

Teachers have also held  “grade-ins”, conducting their grading sessions together outside to publicly display how much of work is done outside of school hours—time for which their contracts don’t account. Between grading, curriculum planning and other activities, teachers say their work often goes into evenings and weekends. The union says these protests have not been organized as official union actions, but were a way for teachers to display solidarity with one another.

The protests will be necessary with the kind of superintendent that the union is dealing with in settling this contract.

According to union president Gorham, OUSD superintendent Antwan Wilson is a graduate of the Broad Superintendent Academy, an academic leadership training academy created by billionaire educational reformers Eli and Edythe Broad that has churned out superintendents trained under the Boards’ preferred corporate-tinged model of pro-charter school policy that many teacher activists say has proven detrimental to the working lives of teachers across the country. Such reform has meant a decrease in work stability measures for teachers like tenure, attempts to break teachers’ unions, an increase in standardized testing for students, disruptive measures like school closings for schools that “underperform” on those tests and other measures. The Christian Science Monitor reported in 2011 that 21 of the nation’s 75 largest districts had Broad Academy graduates at the helm or near the top, giving the Broads, as well as other notable corporate reformers such as Bill Gates and the Walton family (the owners of Walmart), a foothold for considerable influence over public education reform.

“Oakland has been a target for the Broad-Gates privatization movement for years,” Gorham claims. “[Superintendent Wilson] is proposing many familiar ‘reforms’ that reinforce instability and a lack of confidence in our schools that make our parents vulnerable to charters’ snake oil pitch.”

Although OUSD’s charter school population is California’s highest per capita as of 2013, OEA’s most recent win came in March when, after an active presence in the streets and at school board meetings, they successfully pushed back against the district superintendent’s suggestions to offer five district schools with low test scores and high suspension rates, including three of its five high schools, up to charter school operators.

"The massive outcry by the school communities and OEA members scared away the charters from submitting proposals—this time," Gorham says. "But the policy still exists and OEA sees this as our largest struggle going forward."

OEA says they aim to continue such activism, but are now focused on the potential strike to confront public education's corporate reformers like Wilson and win a fair contract. The union says they hope to gain for teachers across Oakland what they feel has been long overdue: making teaching into the kind of decently paid profession that will keep teachers around long enough to give Oakland children the stability they deserve.