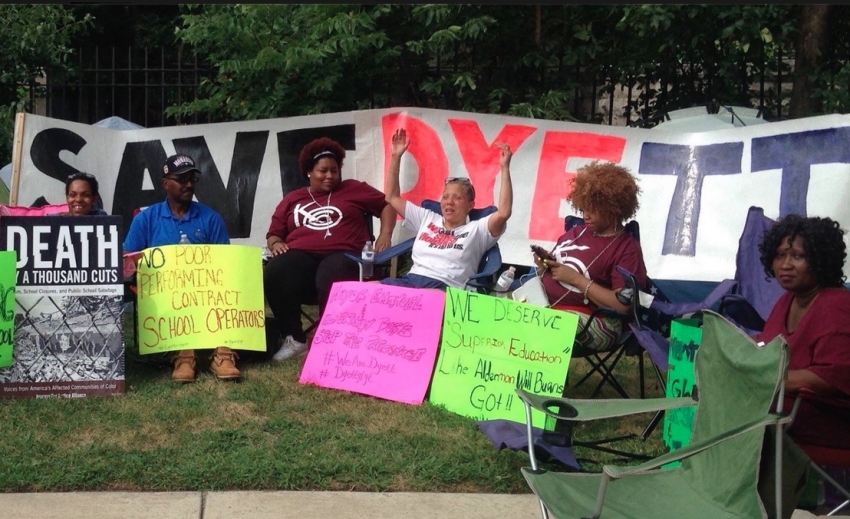 “That it’s 2015 and not 1950 and black people have to go on a hunger strike to get a neighborhood school—it says to me I’m not even human,” one parent says. (Michelle Strater Gunderson)

As schools across Chicago begin the cleaning and organizing process leading up to the first day of school on September 8, one will stay shuttered. Dyett High School, in on the edge of the Bronzeville neighborhood, won’t be opening its doors this year.

The high school has long been in the process of closing. Chicago Public Schools (CPS) announced in 2012 that Dyett would be “phased out,” meaning after 2012 no new students would be admitted, as a result of low test scores, and the building would be closed when the last class graduated.

Three years later, Dyett’s doors are now closed. But the fight to reopen the school is heating up. On Monday, August 17, 12 parents and neighborhood activists began a hunger strike, under the banner of the Coalition to Revitalize Dyett High School, to demand that CPS make a decision on the future of the school and reopen it as a district-run, open-enrollment, neighborhood school that would allow all students to attend regardless of grades.

CPS announced last year that it would consider proposals for a new manager and school vision for Dyett. But after months of delays, most recently an August meeting rescheduled for September, and with a long history of mistrust between community groups and the district, community members say they’ve waited long enough.

"The city has sabotaged our community, which we know is undergoing gentrification. Why would they close the only neighborhood high school left for our children?” Irene Robinson, a grandparent with young children that would have gone to Dyett had it not closed, said in a statement.

They are calling for an emergency hearing at the Board of Education—and to ask CPS to make a decision that isn’t “based on political ideology or cronyism.” The coalition’s proposal is for a district-run, green technology school with partners including the Chicago Teachers Union and the Chicago Botanic Gardens. The other two proposals the board will consider to replace Dyett are from an arts education non-profit, which has proposed a "contract school" that would not be run by the district, and a former CPS principal, whose proposal does include a district-run school. But Dyett parents and community members say they believe the best option for future students is the proposal formulated by the community.

But activists argue that more than the fate of Dyett is at stake in this fight. They say years of “education reform” have change the character—and schooling options—of their neighborhood. Bronzeville has been the target of many school closings and reform plans in recent years—more than 15 in just over a decade. The hunger strikers say these changes have made public high schools that can be attended without an application process in the area sparse, hunger strikers say.

Jeanette Taylor-Raman has spent all but the last three of her 40 years living in Bronzeville, and the last few nights sleeping in tents near the school while on hunger strike. She says the idea that her daughter may have to travel several miles to the nearest open enrollment high school instead of attending Dyett, is unfair. At issue, she says, is race.

Taylor-Raman has been in a community group, the Kenwood-Oakland Community Organization (KOCO), that has been fighting for Dyett since the school’s phase-out was first announced. As part of the Coalition to Revitalize Dyett High School, Taylor-Raman and others have held sit-ins in City Hall, filed discrimination lawsuits and picketed Board of Education meetings.

The Dyett hunger strike is only the latest flare-up in a public school system in turmoil. Contract negotiations between CPS and the Chicago Teachers Union remain in a stalemate, and financial woes including some bad investment decisions (and the district’s unwillingness to renegotiate them) have left CPS begging for operating funds from a reluctant state government.

The demands of the CTU and the Dyett hunger strikers have important overlaps. In response to CPS calls for cuts in its pension contributions to teachers, the union has said that CPS is “broke on purpose.” Dyett hunger strikers also say they do not believe there is a lack of money for a neighborhood public school. Taylor-Raman points to the CPS purchase of a new building in downtown Chicago: “They don’t have a budget crisis if they can purchase a new building. Black and brown people are just not the priority.” (CPS claims it purchased the new building to save money over the long term.)

Also of great concern to both groups has been the sea change in the makeup of CPS. The closing of 49 public schools in 2012 received a huge amount of press coverage at the time. But even before that, reform measures like Renaissance 2010 and the Mid-South plan closed dozens of schools throughout the city and turned over many of the buildings to charter school operators. And in the latest CPS budget, money doled out by projected enrollment numbers resulted in an increase in funding for charters, while all the schools losing funding were run by the district.

With the additional possibilities of a teachers strike still looming amid continued budget cuts, the coming CPS school year will likely be one of continued protests.

The tactic of hunger strikes around social justice issues has a long history in Chicago. Little Village Lawndale High School, a social justice-focused high school, was opened following a hunger strike, and a group of residents in the Pilsen neighborhood stopped eating to demand the closure of a polluting, now-shuttered coal power plant.

With schools set to open in less than two weeks, it remains to be seen how the hunger strikers pressure will bear fruit. But that history of educational justice activism has helped Taylor-Raman spur her continuing fast, she says.

“That it’s 2015 and not 1950 and black people have to go on a hunger strike to get a neighborhood school—it says to me I’m not even human,” she says.