Behind the Business Attire, Many Bank Workers Earn Poverty Wages 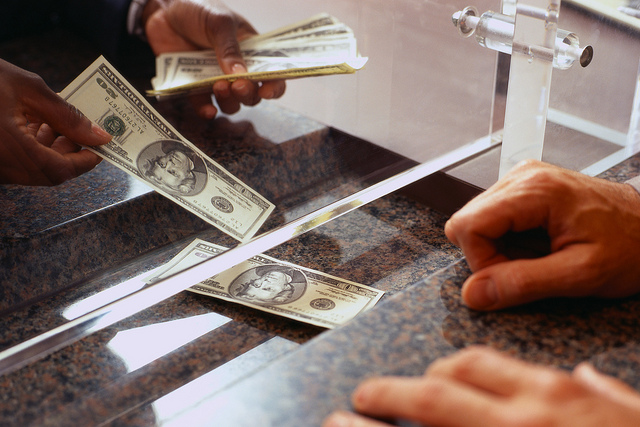 Walking into a bank, a customer is usually interacting with a teller dressed in business attire. The clothing gives the impression of relatively high, stable wages, maybe even a comfortable perch somewhere in the middle or upper-middle class. But the collared shirts and pressed slacks may be hiding the reality: a significant portion of customer service workers in the retail banking industry make salaries low enough to make public assistance necessary.

The Committee for Better Banks (CBB), a Communications Workers of America (CWA)-affiliated community and labor coalition, was created in 2013 to put an end to that. Cassaundra Plummer, a Maryland-based CBB member currently employed as a bank teller at TD Bank, told In These Times, “A lot of the issues within the banks are not discussed, they’re kept really quiet. As a young woman, I always thought that working at a bank was more of a prestigious job than retail. Once I actually got into banking, I realized that it’s not a whole lot different.”

The CBB, which has grown from eight lead members in April to approximately 60 in six different states today, with thousands more either engaged through petition signing or attending rallies. CBB is hoping to expand and create a critical mass of organized workers by bringing these issues out in the open.

A study released by the National Employment Law Project (NELP) early this month shored up CBB claims, finding that 30.4% of the 1.7 million retail banking employees across the country—more than 500,000 workers—are paid less than $15 an hour. Nearly three-quarters of low-wage bank workers are bank tellers, 84.3% of which are women.

Another report, published by the UC Berkeley Labor Center last year, found that these low-wages led 31% of bank teller families toward enrolling in public assistance programs (compared to 25 percent of the entire workforce). “The cost of public benefits to families of bank tellers is nearly $900 million per year,” says the report.

Though it was labeled an “occupational winner” by the Bureau of Labor Statistics for its 84% throughout its growth in the 1970s, the introduction and proliferation of automated teller machines helped put the brakes on that, leading to a projected 1% growth over the next decade. As Timothy Noah noted for Slate in 2010, banks tellers earn “slightly less than [they] did in 1970,” putting the job at the center of wage stagnation that has become common-place throughout the middle class, especially within the context of expectations of higher productivity.

CEO compensation and executive pay indeed remain at worrying heights. The NELP report found that CEOs of Wells Fargo and Bank of America made amounts equal to more than 500 times the annual earnings of an average bank teller. Stephen Lerner, the architect of SEIU’s famed Justice for Janitors campaign, summed up the wealth disparity among bankers at the top and bottom of the pay brackets in a 2010 New Labor Forum article, writing, “We could increase pay by $2.00 per hour and provide employer-paid health insurance for over 550,000 tellers with just 3.6 percent of the bonuses paid out to executives.”

“The constant focus on making more forces the people working in the bank to take on more work, but we’re being paid the same amount,” says Plummer. “We’re not expecting to become wealthy off of entry-level positions. But the corporations make a lot of money off of the things that we do—the sales goals, and all that we have to do to create wealth for the bank. It should be reciprocated back to the employees.”

By shifting traditional banking services toward automation, low-wage bank workers such as bank tellers and personal bankers have also become the frontline for pushing financial products on to customers in an effort to increase profits. The pressure of sales quotas imposed by management and executives at the top keeps low-wage bank workers under more scrutiny than ever before. Customer service employees in retail banks must not only attempt to hook patrons onto core retail banking services like checking and savings accounts, but must also resort to hawking mortgages and credit cards in ways CBB organizers say can be predatory. Tellers risk termination if they fail to meet quotas for such products.

“Wells Fargo creates an environment of hostility and humiliation. Multiple times I witnessed management behaving in a condescending fashion to those who did not meet ‘goals’ even though their customer service was excellent. Wells no longer cares about customer service or the best interest of their customers; they are only looking to push products and most of the time they are unnecessary products,” one bank employee told the Committee of Better Banks when they surveyed 5,000 workers for the aforementioned study at the group’s conception.

According an April 2015 report by the Center for Popular Democracy, since 2011, 17 different lawsuits across the top five banks in the country (JPMorgan Chase, Bank of America, Citigroup, Wells Fargo, and US Bank) have been settled for nearly $46 billion, “highlighting a range of alleged illegal and unethical business practices.”

A 2013 Los Angeles Times investigation reported that the pressure of sales goals, which increase U.S retail banks’ profits, has led some bank workers to commit fraud, forging signatures, opening secret checking accounts with fees attached, or even credit lines for customers in order to keep up with their sales goals. This has led to lawsuits from customers and even cities decrying the rigid and unfair sales culture fostered by the banking industry. When these practices become public, banks fire employees and managers in alleged attempts to uphold ethical finance.

But as Khalid Taha, one of the first Committee members in California, currently employed at Wells Fargo in San Diego, describes it, the “impossible” sales goals come from the top and workers ultimately have no other option. “They fire the entry level employees which is us, but if you think about it, yes we are responsible for it, but we are also victims,” says Taha. “We have to keep our jobs, pay our rent. We have no way but to go a little bit shady when we deal with our customers because the company wants to meet their quota. They don’t care how.”

Beyond low pay, CBB has been working to connect these pressurized work environments to their detrimental effects on the economy caused by the bank’s business practices.

The top four retail banks in the country (JPMorgan Chase, Bank of America, Citigroup, and Wells Fargo), part of the too-big-to-fail banking institutions that some, like presidential candidate Sen. Bernie Sanders, have called to be broken up, now collectively possess assets equivalent to 45% of the U.S economy, a slight increase than what it was in 2008 before that year’s financial crisis.

Lerner, who is currently advising CBB as a fellow at the Kalmanovitz Initiative for Labor and the Working Poor at Georgetown University, told In These Times, “This campaign is different from many union campaigns that say ‘our sole goal is winning better conditions for workers.’ Those campaigns are important, [but] in this case we’re saying that you can’t win better conditions for workers unless you reform the industry—and you can’t reform the industry unless workers are helping reform it.”

At an April 2015 rally in Minnesota where they delivered 11,000 signatures on a petition calling for an end to sales goals, the Committee for Better Banks released a proposed bill of rights for bank workers. One of the planks of the bill addresses what they say is community suffering at the hands of banks: “We must eliminate unreasonable sales goals or performance metrics that force us to push unnecessary products on our customers. We are here for our neighbors—for the child who opens his first savings account, for the newlywed couple planning ahead to retirement, for the senior citizen opening a credit card. We want to be honest brokers of your financial security, and that means an end to pressure tactics that only serve to line shareholders’ pockets.”

“We’re at the very beginning of a baby-steps campaign to build working support for the idea that we need to do two things, and that come simultaneously: We need to address how bank workers unfairly—low pay, etc., but we need to connect with how the finance industry behaves is bad for the overall economy,” Lerner says.

In 2010, Lerner was launching SEIU’s new plan to organize bank workers. Mike Elk described that effort as emanating from his realization that banks influenced the rest of labor organizing through its close connections to the pensions and investment banks that intertwined with financial decisions made not only by workers but their communities, as well.

At the time, fellow journalist Steve Early told Elk, “[Successful organizing] require[s] a long-term commitment that few unions are willing to make, even when dealing with a strategic multinational target that’s not going away.” Lerner left SEIU later that year under disputed circumstances, and his work organizing bank employees was abandoned by the union.

CEO and President of union-owned Amalgamated Bank, Keith Mestrich announced in early August that the bank’s employees would be making at least $15 an hour under their new collective bargaining agreement. He told Buzzfeed, “We think it’s the right thing for our bank to do, and frankly we think it’s the right thing for all banks to do. … If any industry in this country can afford to set a new minimum for its workers, it’s the banking industry.”

But in the rest of the nonunionized retail banking industry, CBB, like the Fight for 15 and OUR Walmart, will be agitating for improvements.

“It was a little bit scary at the beginning, but we have to do it. If we don’t talk then the banks will do whatever they want to do,” says Taha.

The Communications Workers of America is a sponsor of In These Times. Sponsors play no role in editorial content.