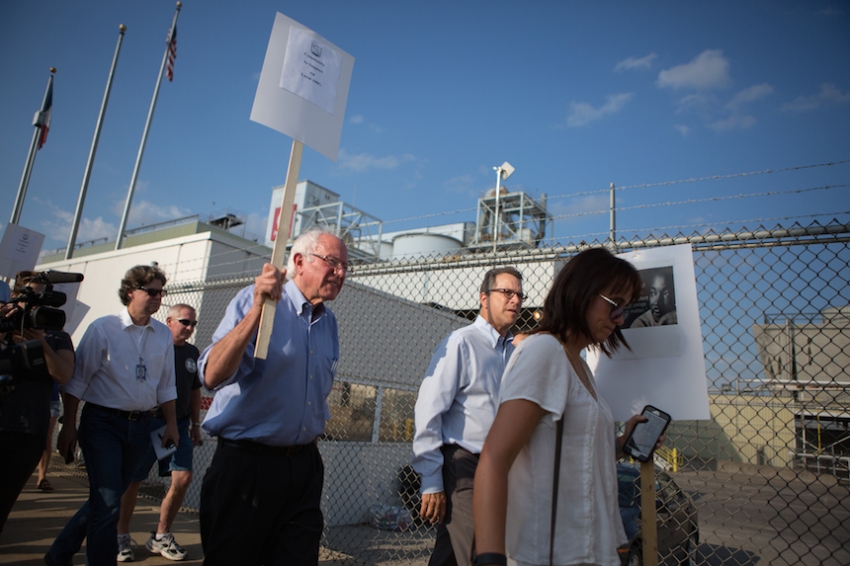 Bernie Sanders on an Iowa picket line earlier this year.

“Bernie Sanders has a long history of fighting for working people,” Richard Gulla, President of SEIU Local 1984, said in a statement. “He shares many of our members’ goals and values,” he said, listing Sanders’ combative stance on “Wall Street greed and corruption” and the Vermont Senator’s support of higher wages and accessible higher education.

Local 1984, also known as the State Employees Association (SEA), represents 11,000 workers, and is the first SEIU local to break with the international union since its Tuesday endorsement of former Secretary of State Hillary Clinton, a decision which puzzled some due to Clinton’s reluctance on a demand for a $15 minimum wage that has been a goal for SEIU’s allies in the Fight for $15 movement.

“While we differ in our endorsement, we share the same values, hopes and dreams for our country,” says Gulla, with the statement noting “SEA/SEIU Local 1984 and SEIU International will work together respectfully during the primary.”

SEIU 1984 joins the approximately 30 different locals from around the country that have decided to endorse Sanders thus far. While a SEIU local representing 500 workers at New Hampshire’s Dartmouth College had endorsed Sanders in late October, Local 1984’s size and the precedence of its break with the international post-Clinton endorsement makes 1984 a unique player for the Sanders campaign in New Hampshire, where polls in the first-primary state reflect that the difference between the two Democratic frontrunners is within the margin of error.

“No matter what happens inside the Beltway, today’s news shows without a doubt that the passions of working families are clearly with Bernie,” says Sanders’ New Hampshire state campaign director Julia Barnes.

The SEIU’s largest local, 1199, had decided to delay its endorsement last week, but ultimately decided to back Clinton the day after the international union’s executive board went with Clinton. George Gresham, President of 1199SEIU, United Healthcare Workers East, said in a statement then:

“Secretary Clinton has the commitment, skills and experience to move our country forward, and the most effective strategy to win the presidency. Therefore, we support SEIU’s decision to endorse Secretary Hillary Clinton, and will mobilize our more than 400,000 members to ensure the priority issues of healthcare workers, our families and our communities are heard loud and clear. Together, we will fight for a country that works for working people, with security, opportunity and dignity for all.”

Local 1984 made its decision based on the results of open poll of all membership, as well as recommendations made by the local’s political education committee after candidate interviews were conducted and further committee discussion. The local alleges that both the open poll and the committee’s recommendations produced majorities in favor of a Sanders endorsement.

“We are a truly democratic organization,” Gulla says.  “Any one of our members is able to join and contribute to the [political education] [c]ommittee; just as any member in good standing is able to run for the Board of Directors. We are proud that we are a completely member led/member directed organization.”

John Hattan, Local 1984’s political education committee chair, added, “We looked at the issues that mattered most to working people, and most members supported today’s endorsement as the best decision.”

Rank-and-file activists, particularly within the grassroots union member network Labor for Bernie, have been making the case that Sanders’ presidential campaign could be the one that is most beneficial to the prospects of organized labor and working people across the nation. In a November 20 statement, Labor for Bernie calls SEIU’s national endorsement  “short-sighted and unprincipled” and based on a “failed strategy of engaging in purely ‘transactional’ politics with corporate liberals.” With Clinton’s labor endorsements coming from major national unions that represent close to 10 million workers, Sanders’ most ardent labor supporters have recently focused on garnering endorsements at the local level. The question of whether this strategy will have an impact on primary turnout is left to be answered.

“This campaign has always been about putting the needs of working people and working families first,” Sanders said in a statement. “That is why I am truly honored to have the support of SEIU 1984 and many local unions across the country, as we work to build an economy that works for all of us—not just the wealthy one percent.”