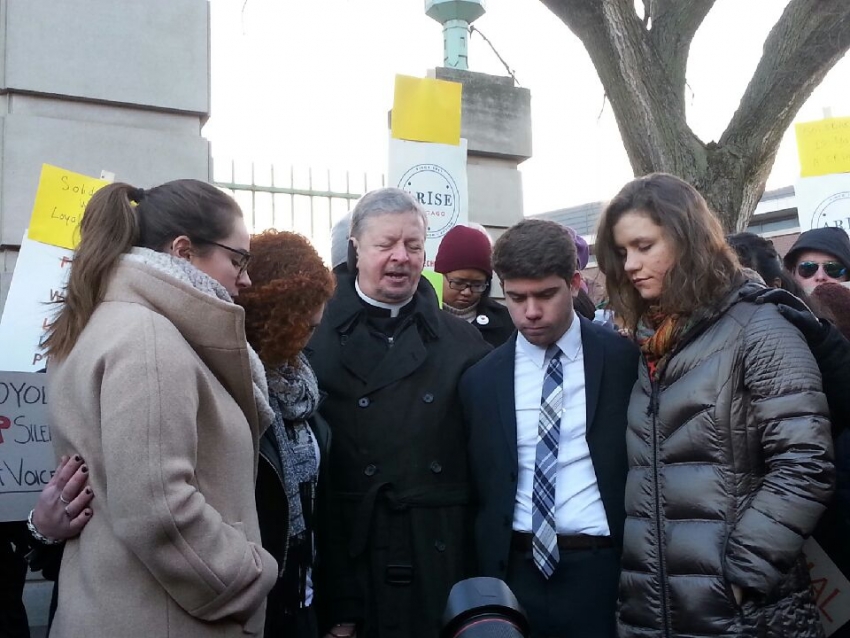 “Faith is not a lofty theory, but a lifestyle,” Methodist pastor Claire Marich said early Monday morning to a small crowd of students, clergy and university alumni gathered outside Loyola University Chicago’s north gates. After each speaker spoke, the attendees held hands, bowed their heads and prayed.

The occasion was not a religious ceremony on the Catholic school’s campus, but a conduct hearing that four Loyola University seniors were preparing to attend, which the students and their supporters view as a heavy-handed attempt to silence free speech and protest at a Jesuit university that claims deep concern with issues of social justice.

The “Loyola 4,” along with Loyola’s entire student government, are being charged with disruption and harassment of a staff member over a November 20 demonstration for higher wages for unionized food service workers, which they helped organize and lead. If found guilty, they face probation and even suspension from the university.

The hearing involved the four organizers and three more students representing the student government, with two administrators overseeing. According to Lillian Osborne, one of the four, much of the group’s efforts were focused on combating the charge of disruption, which they viewed as the most tenuous. (Full disclosure: Osborne is a former In These Times editorial intern).

On November 20, a crowd of students and dining hall workers gathered at Loyola’s Damen North Lawn to protest the treatment of those workers by Aramark, the food service contractor hired by the Loyola administration. Following the demonstration, which was sponsored by the student government, a smaller group of students marched into the nearby Damen Dining Hall to bring their concerns to Bill Langlois, Aramark’s campus representative. This act allegedly violated the university’s community standards regarding disruptive and disorderly conduct, harassment and bullying.

The students submitted their own video of the demonstration as evidence, arguing that it showed Mr. Langlois had been dealt with respectfully, and that the time the confrontation took place, 4 p.m., was the lowest period of activity at the dining hall and deliberately chosen by the students. No one was manning the cash register at the time, Osborne says. They also argued that the hall’s 550 person-plus capacity allowed easy accommodation of the 40 protesters, and that the action was within Mr. Langlois’ scope of employment.

Loyola spokesperson Steven Christensen says that since student conduct hearings are confidential, the administration would not provide its own details of the hearing out of respect for students’ privacy.

Osborne sees the hearing largely as a formality, far from a court of law where a compelling argument has the potential to sway opinion.

“They’ll probably find us guilty of something,” says Osborne. “I don’t have a lot of faith in the administration to do the right thing.” When reached for comment, Christensen said that “no decision has been delivered at this point.”

“I do not want to participate in an atmosphere that stifles the passion of student expression, nor did I run to do so,” Fasullo wrote. “Students here, just as students anywhere, deserve the right to express themselves and to hold their campus decision-makers accountable.”

“A total contradiction of the Jesuit mission”

One of the common refrains of the protesters and their supporters is that the administration’s actions are hypocritical. The four students say they are being punished for following the very social justice values the university taught them in the first place.

This was a theme touched on numerous times at the press conference outside the North Loyola Gates yesterday morning. Labor organizer and Loyola class of ’98 alum Mary Kay Devine was one of those who came in solidarity. She said she was shocked to learn that the administration was allegedly punishing students for fighting for workers’ rights and was now reconsidering the yearly financial contribution she made to her alma mater. Devine says that the kind of on-campus protests the students are facing disciplinary action over are the culmination of a social justice movement that was beginning to grow when she attended the university.

“There’s this vibrant movement happening on campus, [and] the administration’s trying to squash it,” she said. The university’s actions were a “total contradiction of the Jesuit mission,” which emphasizes social justice.

The university once ran an ad campaign with the slogan, “Social justice isn’t just for rock stars,” an apparent reference to celebrities like Bono of U2.

“As a Jesuit, Catholic university, we strongly believe in, and welcome, debate and differing views on campus,” Christensen says in response. He notes that the university is not opposed to student demonstrations, and that the four students are not being charged for the wider protest.

The organizers have also received personal words of support from Wheaton College’s Dr. Larycia Hawkins, who has been in the midst of her own free speech fight with a religious university. Hawkins, who was put on administrative leave by Wheaton administrators after saying that Christians and Muslims worship the same God, sits on the board of labor organization Arise Chicago, which helped organize a public campaign around the students’ predicament. Hawkins’ support was “affirming,” Osborne says.

While Wheaton is a fundamentalist Christian college, Loyola styles itself as a more progressive university. Yet both schools have raised the specter of discipline against those on campus engaged in social justice-focused action.

The “Loyola 4” expect to receive a verdict on the charges sometime over the next few days. In the meantime, for them, the hearing is a sign they’re doing something right.

“It’s difficult to live out social justice values,” says Osborne. “But we will keep struggling to live out those values.”