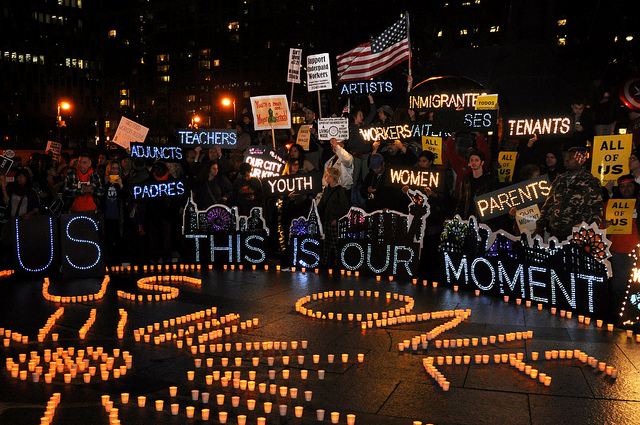 The decline of unions contributes to the prospect that wages in advanced countries, especially in the United States, will remain flat or, more likely, fall for the next generation. (Michael Fleshman/ Flickr)

Since the 1890s, the United States has set aside the first Monday in September as Labor Day. It’s meant to be “a yearly national tribute to the contributions workers have made to the strength, prosperity, and well-being of our country,” according to the Labor Department. But in recent years, the day has been as much an occasion to reflect on how the labor movement and American workers have lost ground as a time for celebration.

Unions do have some grounds for cheer this year—a burgeoning movement of low-wage workers and their advocates that is moving towards a substantial increase in the minimum wage, new laws protecting long-ignored groups of workers, such as domestic and home care workers, and an interest in unions among young workers.

But actual organizing of workers into collective bargaining units with contracts has not kept pace with the growth of the private sector workforce. And it has become painfully obvious that as unions represent a smaller share of the workers in a region or industry, their members have less power and, with less power, they have a harder time bargaining for higher wages and other improvements.

In a twist on these observations, the Economic Policy Institute recently released a paper—written by Jake Rosenfeld, an associate professor of sociology at Washington University in St. Louis, Patrick Denice, a postdoctoral research associate at the same school, and Jennifer Laird, a postdoctoral research scientist at the Center on Poverty and Social Policy at Columbia University—that argues the decline of unions, especially since 1979, has had a negative impact on the incomes of non-union workers.

Labor analysts have long recognized that unions can raise the pay of non-union workers, by advocating legislation setting minimum wages or other standards, for example. Many employers also see unionization of their workforces as a threat, and they will raise their non-union workers’ pay as a way of reducing the likelihood of unionization.

Rosenfeld and his colleagues stress that unions become “players in a broader ‘moral economy’ that help institute norms of fairness regarding pay, benefits, and worker treatment,” especially within industries and regions where unions are strong.

But the authors argue the reverse has proved true as well. As unions have declined, wages of non-union workers—especially men with less than a college degree in formal education—have stagnated or fallen.

If the same percentage of workers were organized today as in 1979, the authors calculate, non-union men in the private sector would earn 5 percent more, a difference of about $2,704 a year (or in macroeconomic terms, an increased capacity of those 40 million workers to buy $109 billion worth of goods and services).

Non-union male workers in the private sector with less than a bachelor’s degree have lost even more. If union density were the same as in 1979, they would earn about 8 percent more. That amounts to a difference of some $3,016 a year.

Ultimately, all workers, both union and non-union, benefit when more workers in a given industry or region are organized. Above a certain density, unions define the prevailing conditions of work, as they did during much of the 1950s through the 1970s. Now, the non-union sector of an industry or region sets the terms for even union workers in that job market.

The impact of these wage patterns compounds itself in a downward spiral. The decline of unions contributes to the prospect that wages in advanced countries, especially in the United States, will remain flat or, more likely, fall for the next generation.

Falling wages and slow wage growth are huge obstacles to recovery from the depths of the Great Recession, which has been slower and longer than other recent recessions. EPI research and policy director Josh Bivens reports that this disappointing performance is relatively simple and straightforward: aggregate demand was not strong enough to put men and women and machines back to work at full capacity. Fiscal stimuli, such as low interest rates, largely lost effectiveness, and the Federal Reserve’s plan to raise interest rates is out of step. Republicans fiercely fought federal spending measures that could stimulate demand, from traditional infrastructure to subsidies for states to expand Medicaid.