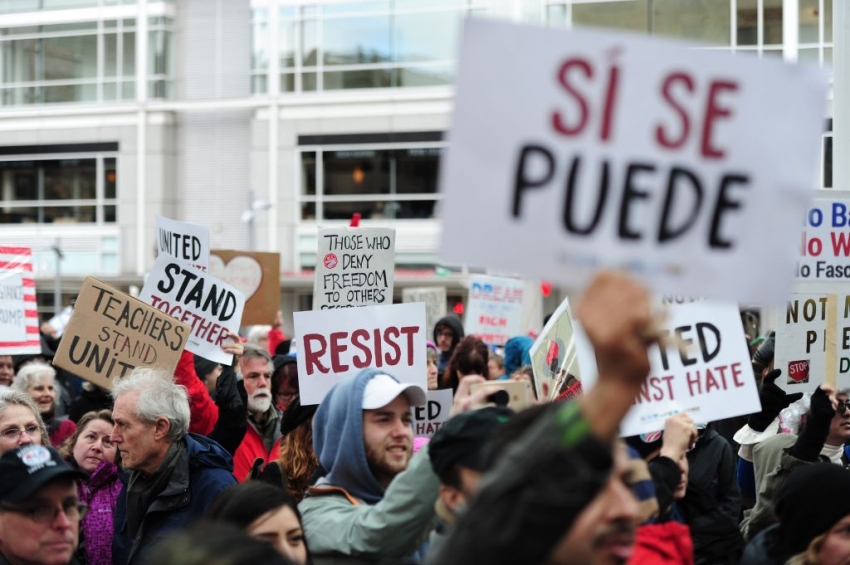 While Trump’s actions will be devastating for organized labor, they may also have a silver lining. The Trump era is seeing the emergence of what has been called “social self-defense,” a massive self-organization of millions of Americans to resist Trump’s agenda. (Photo by Alex Milan Tracy/Anadolu Agency/Getty Images)

The Trump presidency presents organized labor with a dilemma.

On the one hand, Trump’s advocacy for fossil fuel, infrastructure and military expansion promises to provide jobs for some union workers. His proposals to end trade deals and put tariffs on manufacturing imports align with long-standing labor opposition to pro-corporate globalization.

On the other hand, Trump and his Republican allies in Congress propose tax, budget and social welfare policies that would impoverish most workers. His Cabinet nominees are proven enemies of organized labor and the rights of workers. And his executive policies, legislative priorities and likely Supreme Court appointments point towards catastrophic restrictions on organized labor.

Some in organized labor, especially in the buildings trades, have met with Trump, provided photo ops, and advocated that unions try to work with him, particularly on trade, energy and infrastructure. They know that many union members voted for him. Others have called for resistance to the entire Trump agenda.

The effort to embrace and work with Trump is short-sighted at best, and it may be short-lived. The survival of the labor movement depends on denying Trump the power to implement his agenda. The Trump presidency is likely to be catastrophic even for those unions that are currently seeking his favor. If the power of organized labor and its allies is further diminished, governments and corporations will be free to create a “union-free environment” for the building trades as for everybody else.

Trump’s infrastructure proposals are based on tax credits to private investors, private equity, and low-cost construction. The result is likely to be the banning of prevailing-wage rules and union security provisions for construction workers. Case in point: The Republican-led Kentucky legislature recently passed not only “right-to-work” and “paycheck protection” laws, but repealed the state’s prevailing wage law—a crucial support for building trades unions.

While Trump’s actions will be devastating for organized labor, they may also have a silver lining. The Trump era is seeing the emergence of what has been called “social self-defense,” a massive self-organization of millions of Americans to resist Trump’s agenda. It has been manifested by the millions who participated in the Women’s March, the spontaneous actions against Trump’s Muslim ban, the mass demonstrations and community meetings in cities around the country, the millions of calls that have tied up politicians’ phone lines and myriad other forms of resistance.

The term “social self-defense” is borrowed from the struggle against the authoritarian regime in Poland 40 years ago. In the midst of harsh repression, Polish activists formed a loose network to provide financial, legal, medical and other help to people persecuted by police or unjustly dismissed from work. They organized free trade unions to defend the rights of workers and citizens, and nurtured many of the networks, strategies, and ideas that eventually helped topple the repressive regimes in Poland and other countries.

The emergence of social self-defense here may provide the labor movement a way not only to protect itself from the Trump assault, but to begin the transformation towards becoming a powerful force for working people and social justice again. Here is a four-point plan to jump-start that process:

1. Develop an alliance of unions willing to fight the whole Trump agenda.

Such a coalition includes labor rights, LGBT rights, immigrant rights, women's rights, climate protection, international peace and cooperation, government under law—the whole nine yards. The "big tent" needs to include unions that are not part of the AFL-CIO and have taken a strong stand against the Trump agenda, such as the Service Employees International Union, the National Education Association and worker centers. It also needs to include locals that don't go along with their pro-Trump internationals. Such an alliance might start with a simple statement by these unions of their opposition to the Trump agenda, calling for organized labor to participate in both the political and the street-level aspects of social self-defense. At the very least, it can obliterate the Trump-promoted public perception that much of labor supports Trump. As the real implications of his agenda for labor become clear, a strong and principled stand against it is likely to find growing support even among unions that initially found some elements of it attractive.

When people go to airports to protect immigrants from Trump's Muslim ban, unions should be part of the action. Labor was represented at the Women’s March and many unions will participate, under labor banners, in the People’s Climate Movement on April 29.

When police arrest workers striking for a decent wage and the right to organize a union, social self-defense activists should be invited to show up, protest, and provide support. When a city or state denies its employees the right to organize and bargain collectively, the local forces of social self-defense should be educated and encouraged to treat it as one more attack of Trumpism on the rights of the people.

4. Fight for full employment fixing the climate and building a new economy.

While Trump’s strategy is based on dividing the working class along lines of race, gender, sexual preference, nationality and other lines, one of his most effective ploys has been to play construction workers who want new energy infrastructure jobs against climate protectors who want to save the earth’s atmosphere from devastating global warming. It is his dangling of pipeline jobs that threatens the climate and Native American rights that has brought divisions in the labor movement to a head. But there is a far better way to provide jobs that can overcome this division. At the core of a new labor strategy should be a program for a worker-friendly “just transition” to a new economy that will put everyone who wants a job to work building a climate-safe America.

Many unions are taking a strong stand against Trump and his Republican allies. Others are likely to do so as the real implications of his agenda become more and more evident. Now is the time to reach out to each other and create a unified voice for labor as a crucial strand of social self-defense against Trump and Trumpism.

Jeremy Brecher is the author of more than a dozen books on labor and social movements, including his classic labor history Strike! and most recently Against Doom: A Climate Insurgency Manual (PM Press, 2017). His book Climate Insurgency: A Strategy for Survival (Stone Soup, 2016) is available for free download at www.jeremybrecher.org. He is a co-founder of the Labor Network for Sustainability www.labor4sustainability.org. Joe Uehlein is the former secretary-treasurer of the AFL-CIO’s Industrial Union Department and former director of the AFL-CIO Center for Strategic Campaigns. He is founding president of the Labor Network for Sustainability www.labor4sustainability.org.