Despite Some Union Support, Trump’s New Labor Pick Would Be Terrible for Workers 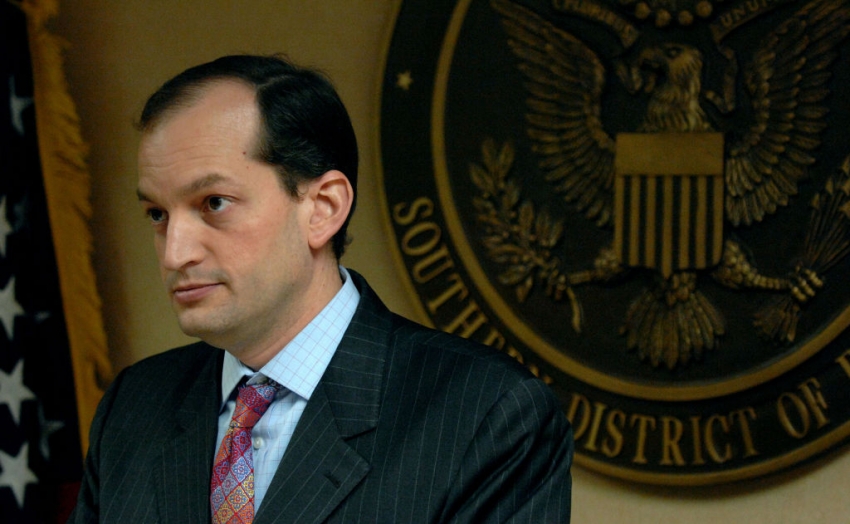 The nomination of R. Alexander Acosta was announced by Trump less than 24 hours after the president’s first choice for the job dropped out of consideration. (Scott Fisher/Sun Sentinel/TNS via Getty Images)

President Donald Trump’s new pick to head the Labor Department is getting an early boost from a “divide-and-conquer” strategy against labor unions and their allies, even before his qualifications and background as a civil servant are scrutinized in a Senate confirmation hearing.

The nomination of R. Alexander Acosta was announced by Trump less than 24 hours after the president’s first choice for the job, hamburger-chain executive Andrew Puzder, dropped out of consideration. Puzder faced mounting Senate opposition, even from some conservative Republicans, because of disclosures that he had personally broken labor law by hiring an undocumented household servant, and also that he had been accused of spousal abuse many years ago.

Labor unions and Democratic Party leaders in Washington, D.C., had maintained a unified front against the Puzder nomination but that unity dissolved almost immediately with the announcement of Acosta’s nomination February 16. His first confirmation hearing, which was scheduled for this week, has been moved to March 22.

The first endorsement came from the International Union of Operating Engineers, followed by one from the International Association of Fire Fighters and then the Laborers International Union of North America (LIUNA) got on board. AFL-CIO President Richard Trumka even offered lukewarm praise, telling MSNBC News: “Well, we’re going to vet him, but he does have a history of enforcing the laws that protect workers, which is a real plus, whereas Puzder had a history of violating the rules.”

Acosta, 48, is currently dean at the Florida International University’s law school, a position he has held since 2009. A Harvard-trained lawyer, he held several appointed positions in the administration of George W. Bush. Before that, he was a labor lawyer at the giant law firm Kirkland & Ellis LLP, known for representing large multinational corporations.

Pro-labor Democrats in the Senate have been conspicuously quiet on Acosta’s nomination—at least thus far. Sen. Elizabeth Warren, a Democrat from Massachusetts, for example, was an outspoken opponent of Puzder but spokeswoman Alexis Krieg tells In These Times that the senator has no comment on Acosta.

Not so shy is Erik Loomis, assistant professor of history at the University of Rhode Island and a labor commentator at the progressive blog Lawyers, Guns & Money. He said:

“The selection of Alexander Acosta should provide no comfort for those who worked to reject Andy Puzder. Acosta has a lifetime of anti-union and anti-worker positions. Appointed to the National Labor Relations Board by George W. Bush, Acosta consistently decided with employers during his term. His support of Ohio's attempt to suppress black voting in 2004 is deeply disturbing. That the AFL-CIO seems to think Acosta is as good as they are going to get under Trump is depressing, but perhaps realistic.”

William B. Gould IV, a law professor at Stanford University, agrees with Loomis’ analysis of Acosta’s tenure at the National Labor Relations Board (NLRB). He says Acosta had “a short, and for the most part uninspiring record” at the NLRB. Acosta served at the board for just eight months in 2003, a time when anti-union Republicans were in control.

“Curiously, one opinion of Acosta’s, while laudable and appropriate, will give him problems with the anti-immigrants,” among conservative Republicans, Gould adds.

In the case of Double D Construction, 339 NLRB No.48 (2003), Acosta stated that a worker who used a false social security number should not be considered guilty of committing a crime. Such misrepresentations are just part of the workday reality for undocumented workers, Acosta argued. This was the correct decision, according to Gould, but will likely be viewed differently by Republicans favoring a hard line against immigrants.

There are at least two “troubling” episodes in Acosta’s Department of Justice career, Jayaraman says. First, Acosta is on record supporting efforts to restrict voting rights for African Americans in Ohio in 2004. In that case, Acosta was accused of exerting political pressure to help suppress voter turnout. “Voting rights are essential to labor rights, so I see this as important,” Jayaraman says.

So does the Lawyers’ Committee for Civil Rights Under Law, an advocacy group that has been fighting attempts to restrict voting laws. Committee President Kristen Clarke stated:

﻿Mr. Acosta led the Civil Rights Division at a time that was marked by stark politicization, and other improper hiring and personnel decisions that were fully laid to bare in a 2008 report issued by the Office of Inspector General (OIG). The OIG found that actions taken during Mr. Acosta’s tenure violated Justice Department policy and federal law. Political and ideological affiliations were used as a litmus test to evaluate job candidates and career attorneys, wreaking havoc on the work of the Division. This egregious conduct played out under Mr. Acosta’s watch and undermined the integrity of the Civil Rights Division. It is hard to believe that Mr. Acosta would now be nominated to lead a federal agency tasked with promoting lawful hiring practices and safe workplaces.

A second troubling incident was a plea deal that Acosta negotiated while he was the U.S. Attorney for the Southern District of Florida in 2005, Jayaraman says. In that case, a man accused of having sex with underage girls and soliciting prostitution received a light sentence, apparently because the man was a wealthy businessman who could afford expensive lawyers, she claims.

“This was a sexual predator. This is very relevant to workers in the restaurant sector because sexual harassment and sexual abuse in the restaurant industry is just rampant,” Jayaraman tells In These Times. “Acosta does not take the issue seriously.”

But in the final analysis, “it doesn’t matter whether it’s Puzder or this guy (Acosta). The agenda is the same … The secretary of labor doesn’t set the policy, the president does,” says Jayaraman.

He says: “Trump's selections, both Puzder and Acosta, are inherently anti-worker. But so is Donald Trump, despite the unusual level of support he received from union members.”