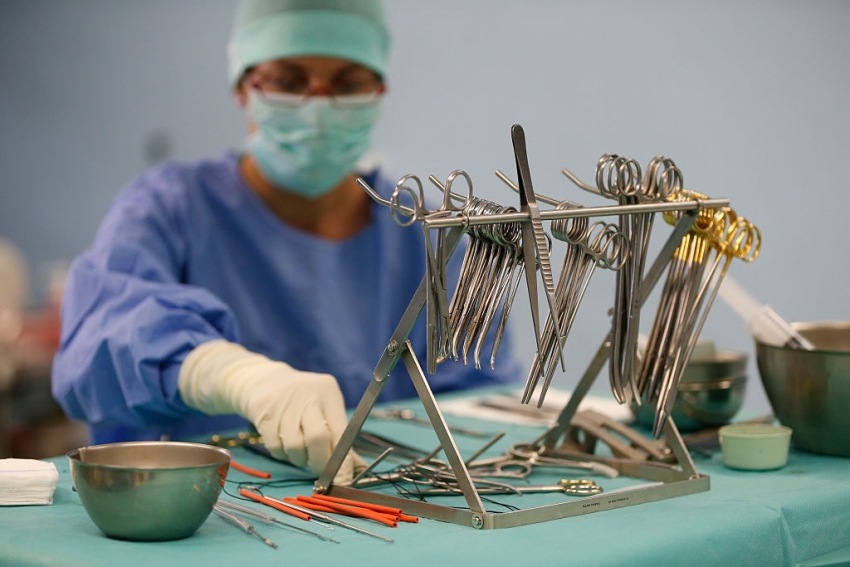 Management’s argument was that foreign experience was not comparable to U.S. experience. But the underpaid nurses coming forward had something else in common: they were primarily people of color, mainly from India. (Godong/UIG via Getty Images)

It started when a few nurses at Temple University Hospital told stewards that they weren’t being paid for their experience.

One of the first to speak up was Jessy Palathinkal, who had become a nurse in India in 1990. She got her U.S. nursing license when she moved here in 1995. But when she started working at Temple, her placement on the pay scale was as though those five years of nursing never happened.

She asked why. Human Resources told her the hospital didn’t count years of experience in foreign countries.

“I was feeling a little bit upset. I had all the certification,” Palathinkal said. “I thought, ‘Well, that’s not right, but what can I do?’”

What Palathinkal did was tell her shop steward. The steward told officers of their union, the Pennsylvania Association of Staff Nurses and Allied Professionals (PASNAP). And the officers started asking around to see whether anyone else was affected.

They put out a call in their monthly newsletter—did anyone else think that their pay was incorrect for their level of experience? Three more nurses had the same complaint.

Four nurses joined a class-action grievance. Management denied it. That’s when union officers decided this was a hospital-wide issue.

Management’s argument was that foreign experience was not comparable to U.S. experience. But the underpaid nurses coming forward had something else in common: they were primarily people of color, mainly from India.

That struck nurse Mary Adamson as unfair. After all, everyone had met the requirements to become a registered nurse in the U.S. “All these people had to take the test, and they passed it,” said Adamson, the union's membership secretary. “They had the knowledge.”

“Maybe in H.R. they were thinking, because India is a third-world country, maybe they don’t want to take my experience,” Palathinkal said. “I can prove my knowledge and skills here, based on my work in India.”

“They were chipping away at contract language, doing it covertly, and targeting people that they knew would be afraid to speak up,” Adamson said.

An attack on the contract

She and other union officers at Temple saw this pattern of underpayment as an attack on the contract. If members aren’t vigilant, management can underpay nurses in many ways—overtime, shift differential, holiday pay. This was no different.

“Truthfully, their experience is just as valuable as working down the street,” Adamson said. “Health care is health care.”

The officers brought the grievance to the bargaining team, already in contract talks. This wasn’t a question of the difference between nurses trained abroad and those trained in the U.S., they argued—the problem was management not respecting the contract. The union’s 20-member bargaining team agreed to raise the issue in negotiations.

Although it was nothing like 2010, when Temple nurses struck for 28 days, the 2016 contract campaign was vigorous. A hundred nurses packed into bargaining sessions; 1,000 signed petitions for better staffing. The union threatened an informational picket before winning a final contract agreement that included a provision spelling out that foreign nurses’ experience should be treated equally.

Meanwhile the original grievance was headed to arbitration, but at the last minute, management caved and agreed to grant back pay to the original four nurses, in addition to bumping them up to the right place on the wage scale.

Winning clear contract language was a breakthrough, but the fight wasn’t over yet. “That expanded the universe” of nurses who might be affected, Adamson said. At membership meetings the union found more underpaid nurses. Ultimately a dozen were brought up to their correct places on the scale.

The whole saga was a new experience for Palathinkal, who had never worked at a union hospital before. At the start, “I didn’t have any knowledge of what I was supposed to do or who was I supposed to talk to,” she said. “I was thinking, ‘This is not going to work.’”

But it did. “The union stood up for me,” she said.

This grievance fight gave union activists a way to get recent hires involved and show them what the union is about. “Not everyone has been through a strike,” Adamson said. “We are constantly trying to raise the consciousness of new people who are coming in.”

Many of the affected nurses have stayed engaged, signing petitions and coming to meetings. “People become more aware of, ‘The boss might be cheating me,’” Adamson said. “Any time we get a win, people are happy about it. It reinforces among the workers that we’re watching.”