Trumpcare 2.0 Is a Death Bill. It’s Time to Fight for the System We Want. 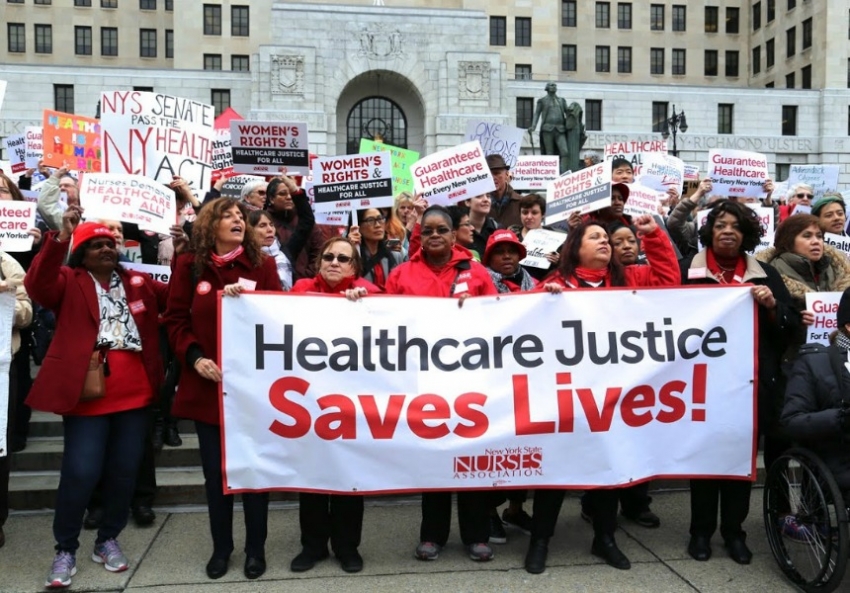 Community members rallied in Albany New York on April 4 to declare that health care is a human right. (Alice Brody)

New figures from the Congressional Budget Office show that, if passed into law, the so-called “Trumpcare” bill would spike the number of people without health insurance by 23 million in 2026. While the GOP pushes deadly healthcare rollbacks in Washington, communities from Pennsylvania to Maine are ramping up their organizing for universal health care at the state level. New York and California are celebrating major progress in their campaigns for state-based, single-payer systems, setting the tone for grassroots campaigns sweeping the country.

The Healthy California Act and the New York Health Act would establish improved Medicare-for-all-style systems in each state, eliminating out-of-pocket costs and guaranteeing comprehensive care to all residents. The California bill won approval from the Senate Health Committee in late April, and the Appropriations Committee is expected to vote on Thursday. Meanwhile, the New York Health Act has sailed through the Assembly and now awaits action in the Senate.

According to Ursula Rozum, upstate campaign coordinator for the Campaign for New York Health, the list of endorsing state senators has jumped from 20 to 31 since the start of the legislative session, bringing it just one vote shy of a majority. Rozum told In these Times that the bill’s success this session is at least partly a response to Trump’s regressive policies, explaining that “in this time of attacks on federal level, I think it helps to say look, we have something viable that could protect New Yorkers from the harms of the federal cuts to health care funding.”

These victories constitute a positive sign that state-based campaigns for universal health care ramping up across the country—and not just in states with progressive legislatures. In Maine, where Republicans maintain control of the Senate and voters have twice elected the far-right, proto-Trump governor Paul LePage, organizers are demonstrating non-partisan, grassroots political unity on the issue of health care.

Such a system appears to have buy-in from ordinary Mainers. I am a member of the Southern Maine Workers’ Center (SMWC), a member-based grassroots organization. We recently released a report entitled “Enough for All: A People’s Report on Health Care,” which shows that the vast majority of people surveyed between February 2013 and March 2016 believe health care is a human right, and that it’s the job of the government to protect that right. “Committed to building a movement of working class and poor people,” the report states, “SMWC sought out people most directly impacted by our system’s profit-driven model.”

Over 70 percent of those surveyed reported that their right to health care is not currently protected. Maine is one of the 19 states that rejected Medicaid expansion under the Affordable Care Act (ACA). Maine is also the only state in the nation that has not seen a rise in the number of residents with insurance since the implementation of the ACA.

The SMWC’s report points out that the gap of coverage in states that rejected Medicaid expansion disproportionately impacts people of color, deepening racial disparities across the healthcare system. According to a study by the Kaiser Family Foundation, black people are twice as likely as white people to fall into that coverage gap. Nationally, more than half of all nonelderly uninsured are people of color. For the SMWC, a universal health system based in human rights would be one where all health disparities are “actively and systematically addressed.”

And while the current system creates and exacerbates many health disparities, the SMWC points out that it is also not working for the vast majority of people. For organizations rallying around the human right to health care, both the failures of the current system, and the attacks on health care coming from the right, constitute opportunities to help people imagine a system that meets their needs. Rozum explains, “if you want to resist Trump, we need to organize around universal social programs that take care of everyone, that unite people as opposed to being means tested.”

This strategy is reflected in the SMWC’s approach to organizing. In a recent interview, SMWC member Cait Vaughan explained the process of surveying people for their report. “What we were trying to do was engage people wherever they were at, whether they had lost their Medicaid… were still on Medicaid, whether they got insurance with the ACA… had no insurance at all, or even employer based insurance. We were trying to engage all these folks to figure out, ‘What are the real roots of the problem?’”

The SMWC is just one organization in a multi-state collaborative of grassroots groups also hailing from Vermont, Maryland, and Pennsylvania that are using the language of human rights to build a base of grassroots support for universal health care. Nijmie Dzurinko organizes with Put People First Pennsylvania (PPF), another member organization of the Health Care is a Human Right (HCHR) Collaborative. Dzurinko told In These Times that “it's important to be working at a scale we can influence.” Dzurinko agrees with Rozum that “state-based efforts are gaining traction precisely because we're going backward in Washington. We have a strategic opportunity to push for a kind of healthcare sanctuary at the state level that insulates our people from the attacks and rollbacks of care at the federal level.”

The Vermont Workers’ Center (VWC), another member of the HCHR collaborative, won a historic victory in 2011 with the passage of Act 48, establishing a path to publicly-funded, universal health care in the state—the first of its kind in the country. While still on the books, the act has yet to be fully implemented, in part because of former governor Peter Shumlin put up roadblocks around equitable financing. The VWC continues to organize for full implementation of the law, while pushing back against the harmful impacts of the insurance-based system kept in place by the ACA. Blue Cross Blue Shield of Vermont has recently requested a 12.7 percent premium increase on exchange plans.

VWC member Ellen Schwartz explains, “we’ll be testifying in July about how these rate increases affect us and our families and call for the full implementation of Act 48 as the solution. This is important because the rate hikes are a symptom of a sick healthcare system, and it’s that system that we are challenging and proposing to transform.”

The 2011 victory of the Vermont Workers’ Center inspired similar campaigns, like that of the SMWC, to view healthcare organizing as a winnable strategy and unite people around human rights. Viewing state-based organizing as connected to the fight over federal policies, Dzurinko points to the fact that “single payer system in Canada started in the province of Saskatchewan before it was national policy.”

With successes like those in California and New York thrown into the mix, single-payer supporters elsewhere in the country may be spurred towards state-based campaigns. Approaching these campaigns with an eye towards building broad bases of support for human rights has the potential to sow resistance against the larger trends of privatization and deregulation, as well as racism and xenophobia, that mark the Trump administration.

Meaghan LaSala organizes for health care justice with the Southern Maine Workers’ Center. Her writing has appeared in Dispatch, Alternet, and YES! Magazine.