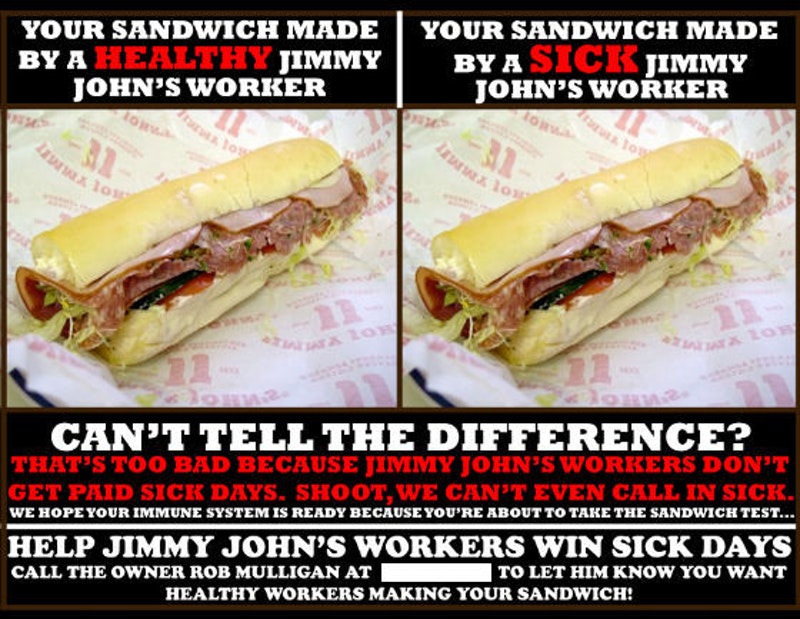 Workers were fired six years ago for distributing this image. (IWW)

In a decision emblematic of the new climate of Trumpian governance, a federal appeals court in St. Louis ruled on July 3 that it is acceptable for the boss of a fast-food chain to fire workers for the sin of being “disloyal.”

The U.S. Court of Appeals for the Eighth Circuit reversed a ruling issued by the Obama-era National Labor Relations Board (NLRB) in a case spawned by a labor organizing drive at the Jimmy John’s fast-food chain. The court held that Miklin Enterprises, the owner of Jimmy John’s franchises in Minneapolis, had the right to fire six pro-union advocates because they demonstrated “disloyalty” by distributing flyers in 2011 that implied the company was selling unsafe food contaminated by employees obliged to work while sick with the flu.

The organizers designed and distributed memes that showed images of identical Jimmy John's sandwiches. One was “made by a healthy Jimmy John’s worker,” the other by a “sick” worker. “Can’t tell the different?” the poster continued. “That’s too bad because Jimmy John’s workers don’t get paid sick days. Shoot, we can’t even call in sick. We hope your immune system is ready because you’re about to take the sandwich test.”

The Minneapolis union campaign, launched by the Industrial Workers of the World (IWW or ‘Wobblies’), has been high-profile from the start. First erupting in 2010, the effort quickly developed into an intense legal fight at the NLRB before advancing to the federal courts. It even spilled over into the U.S. Congress in 2014 with the revelation that Jimmy John’s routinely required its low-paid sandwich makers to sign questionable “non-compete agreements.”

Threatened with punitive action by the attorneys general in several states, Jimmy John’s rescinded its non-compete policies in 2016, but not before the company’s reputation had been tarnished.

Like the non-compete agreements, the July 3 court decision is an unwarranted attack on labor rights, says William B. Gould IV, a labor law professor at Stanford University and former chairman of the federal labor board.

“The first thing that strikes you is how archaic this feels,” Gould tells In These Times. “The legal basis is from a case in the 1950s when people had a whole different concept of loyalty owed to their employer.

“In those days,” Gould continues, “the assumption was that loyalty was a two-way street: You were loyal to the company and the company was loyal to you. Now, with Uber and Lyft and the others, companies are even refusing to admit that you are one of their employees, so there isn’t much talk about loyalty owed to the employer anymore.”

The July 3 decision turns on the interpretation of ‘loyalty’ articulated in the 1953 Supreme Court case National Labor Relations Board v. Local Union 1229 International Brotherhood of Electrical Workers, known as “Jefferson Standard” for short. Earlier in the process of the more recent NLRB case, the labor agency’s Obama appointees had ruled that the firing of the workers was an illegal violation of their rights to form a union. But the appeals court decision reversed that decision, asserting that the disloyalty displayed by the pamphlets gave the employer the right to fire the workers, Gould explains.

The court stated, “(W)hile an employee's subjective intent is of course relevant to the disloyalty inquiry—"sharp, public, disparaging attack" suggests an intent to harm the Jefferson Standard principle includes an objective component that focuses, not on the employee's purpose, but on the means used—whether the disparaging attack was ‘reasonably calculated to harm the company's reputation and reduce its income,’ to such an extent that it was harmful, indefensible disparagement of the employer or its product.”

Erik Forman was fired six years ago for organizing a union at a Jimmy John’s in Minneapolis. He told In These Times, “The big takeaway for me is that this ruling means workers do not have the right to tell the truth about their employer,” he said, adding: “The ruling is incredibly slanted towards the employer. They frame our campaign for sick days as an attack on the employer and turn logic on its head. We told the truth about the risk to the public.”

“Employers' motivation wasn't just to stop the sick-day campaign,” Forman continued. “It was to stop our unionization effort.”

According to Gould, “This case comes from the 8th Circuit which is the most conservative in the country. It’s the worst circuit in the country for a labor union, or for labor rights.”

The ultra-conservative nature of the ruling may have the unintended benefit of limiting its applicability to workers other than the Minneapolis Jimmy John’s employees, the former NLRB chairman adds. Other judicial districts may not be eager to follow its lead because many traditionally defer to the NLRB in matters of this kind, he says, and few employers will want to take the legal risk of relying on a circuit court ruling that has not been confirmed by the Supreme Court.

The reversal of the Obama-era NLRB decision mirrors action in Congress, where several measures are under consideration to roll back pro-worker measures adopted by the labor board during Obama’s tenure. This week, the U.S. Senate is considering thenomination of two Trump NLRB appointees, both of whom have been criticized as anti-worker by the AFL-CIO.

Carmen Spell, an NLRB representative at the agency’s Washington, D.C. headquarters, would only comment that “(w)e are considering options at this time” on how the agency will respond to the court ruling.

Jane Hardey, a spokeswoman for Jimmy John’s, declined any comment, asserting that the legal case involved only the Minneapolis franchise owner, and did not involve the sandwich chain company itself. Hardey did not respond to a request from In These Times for a telephone interview with Jimmy John Liautard, the controversial founder of the franchise.

According to the Jimmy John’s web site, the rapidly growing chain currently has 2,701 locations in 48 states. The number of employees is estimated at over 100,000.

“The fact that we were fired over six years ago in retaliation for union organizing should tell everyone that you cannot rely on labor law in this country,” says Forman. “Every single decision can now be appealed up to a Trump Supreme Court. We need to find new ways of building and exercising power on our own.”