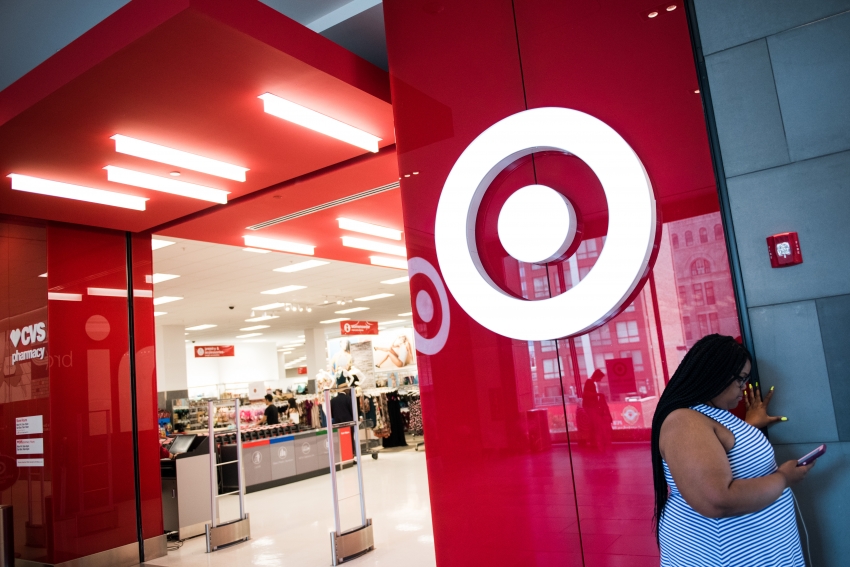 A woman charges her phone outside a Target Corp. store is seen at City Point in the Brooklyn borough of New York on Tuesday, July 18, 2017. (Mark Kauzlarich/Bloomberg via Getty Images)

A Target store in rural Virginia was hit with a wildcat strike last week, and the non-union workers may have already won their key demand—the removal of a manager charged with abusive treatment of workers.

A small fraction of the workers at the Christianburg, Va., store walked out on August 23. But according to Target worker and strike organizer Adam Ryan, the low numbers belied the strong support among employees for the action against the manager. Workers feared retaliation or outright dismissal for taking any overt action, Ryan told In These Times, but many also back up the charges of sexual harassment and racial discrimination directed primarily against the Latino employees.

According to Ryan, the strike was called off on August 28, when workers were satisfied that a serious investigation of the manager by Target corporate officials was underway.

“Target has failed to address these complaints,” the statement continued, “and so workers are forced to strike.”

Strike supporters are now satisfied that Target’s corporate managers finally seem to be taking the workers’ complaints seriously, Ryan continued. Two days after the launch of the strike, the manager disappeared from the shop floor, and employees were told he was “on leave” pending an investigation, says Ryan. Two individuals representing themselves as “investigators” from Target corporate headquarters then began interviewing workers and gathering data, he reports. The investigators even solicited testimonies from New River Workers Power, he said.

New River Workers Power is demanding that the manager be permanently terminated, with no chance for him to be rehired at the Christianburg location, or anywhere else in the Target corporate chain. Ryan stresses, “A temporary suspension and cover up is not acceptable.”

A second demand is “recognition of their independent workers committee to mediate between Target workers and management.”

The Target workers behind this campaign have won support in the local community, particularly from the college students at nearby Virginia Tech, where a consumer boycott was launched. Ryan and other organizers agitated for the wildcat strike on the university campus and were getting good results, he said. A rally was held in front of the school’s Burruss Hall on August 27 encouraging all students to boycott Target’s “College Night” sales promotion.

With a student population of around 30,000, Virginia Tech is a critical pool of customers for Target. According to Ryan, Target’s annual College Night promotion is part of one of the biggest sales events of the year for the store, rivaling even the famed Black Friday event that traditionally kicks off the holiday sales season. Target has been offering a free shuttle bus service from the campus to the store on College Night in recent years, he said, but was forced to cancel the buses this year by the protest.

Expressions of support have also come from representatives of United Food and Commercial Workers union, the United Auto Workers and the Communications Worker of America, as well as from local groups. That support came after the strike was launched, Ryan said, and none of the organizations were involved in the original formation of New River Workers Power. “It’s a completely independent, grassroots effort,” he said.

Target’s corporate press relations office declined to respond to questions from In These Times. However, spokesperson Jenna Reck emailed a prepared statement:

At Target, we want all of our guests and team members to feel welcomed, respected and valued. We offer HR teams at every store as a resource for our team, as well as an anonymous hotline to report incidents. We take allegations like this incredibly seriously and are looking into them now.

The wildcat strike is not the end of worker organizing at the Christianburg store, Ryan concluded. Wages and working conditions must be addressed, he said, and New River Workers Power intends to confront these issues in due course.