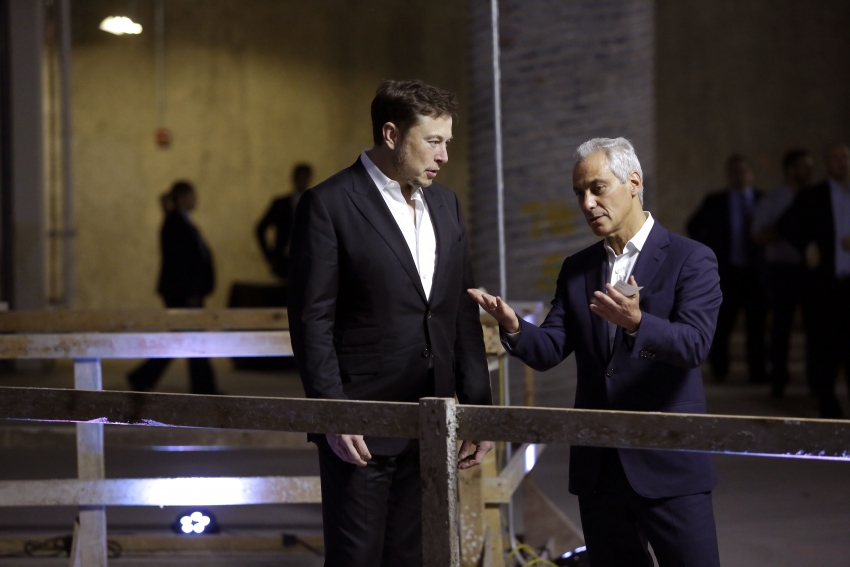 Rahm Emanuel and Elon Musk are at it again. (Joshua Lott/Getty Images)

In June, Chicago Mayor Rahm Emanuel’s administration selected Elon Musk’s The Boring Company to build a non-stop express train from downtown to O’Hare Airport. The development is yet another example of Emanuel’s plan to transform Chicago into a city for the wealthy few.

Emanuel has stated that Musk’s express train will be fully financed by private investors. But the city’s 2009 parking meter fiasco has taught us that working Chicagoans end up on the losing side of fast-tracked privatization schemes. Morgan Stanley Investment Partners (MSIP) paid the city over $1 billion to lease the city’s parking meter system. But in an information memorandum released in 2010, MSIP estimated that, by the end of the lease in 2084, the firm would rake in over $11 billion from parking meter users by charging higher fares.

As with the parking meter deal, Emanuel’s O’Hare express privatization scheme will first and foremost benefit the same set of corporate elites who have profited from years of cuts to public goods and services. Under Emanuel, Chicago has been on the forefront of both recruiting corporate headquarters and displacing African-Americans. Tax giveaways meant to entice corporate CEOs have coincided with school closings in poor neighborhoods of color and service cuts that have made life in Chicago untenable for many working families. As a result, the city faces extreme economic disparity, hosting a racial wealth divide far worse than the U.S. average.

Soon after Emanuel closed 49 public schools in 2013 in part to reduce $100 million from the Chicago Public Schools budget, he authorized a $55 million taxpayer handout to support the development of the Wintrust/DePaul Stadium project and a Marriott Hotel near McCormick Place Convention Center. Since being opened, the stadium has fallen short of attendance predictions and, as studies have shown, such publicly funded sports arenas don’t actually spur economic growth but they do leave taxpayers buried in more debt.

This is neoliberal policy at its core: the public sector is slashed while assets and services are left in the hands of the private market.

Although Musk’s project would be the first airport express train project of its kind in the United States, such ventures in other countries have concentrated public wealth in private hands. A study conducted for SNCF French National Railways finds that 84 percent of private airport express train investors across the globe overestimate the number of riders they will attract by at least 20 percent.

When such privately funded trains fail to hit their ridership targets, the projects can expect a public bailout to keep the trains running. For example, lower than expected ridership on Vancouver’s airport express train forced the Canadian government to pay its private financier over $20 million a year.

The proposed O’Hare express train, set to cost riders an estimated $25 for a one-way ticket, is poised to further deepen Chicago’s crises of growing inequality, neighborhood neglect and displacement of longtime residents. As previous CTA plans have suggested, the express train will likely be given priority over expanding and maintaining local train service, which could ultimately force working people who rely on the Blue Line to experience reduced service and longer travel times.

In light of the growing unaffordability of the city, Mayor Emanuel should be prioritizing ways to make the city more affordable and accessible for everyday residents. He should focus on adding more bus and train service frequency to reduce long wait times and overcrowding, and more train or bus rapid transit connections to job centers in the suburbs. Instead of building a second train line to O’Hare airport, which will disproportionately benefit the rich, why not make public transit free for everyone and provide CTA employees with a fair contract?

In 2015, CTA collected $587 million from riders, on par with the nearly half billion collected by the city’s Tax Increment Financing districts each year between 2011 and 2015. Rather than creating slush funds for developers, the city could be providing free transit for Chicagoans.

As always, these questions are not decided by actual financial means—or democracy—but by political priorities. With Musk’s O’Hare express train, Rahm Emanuel is once again prioritizing adding services and amenities for the rich—and sticking the rest of us with the bill.

Emma Tai is the executive director of United Working Families. Stephanie Farmer is an Associate Professor of Sociology at Roosevelt University.