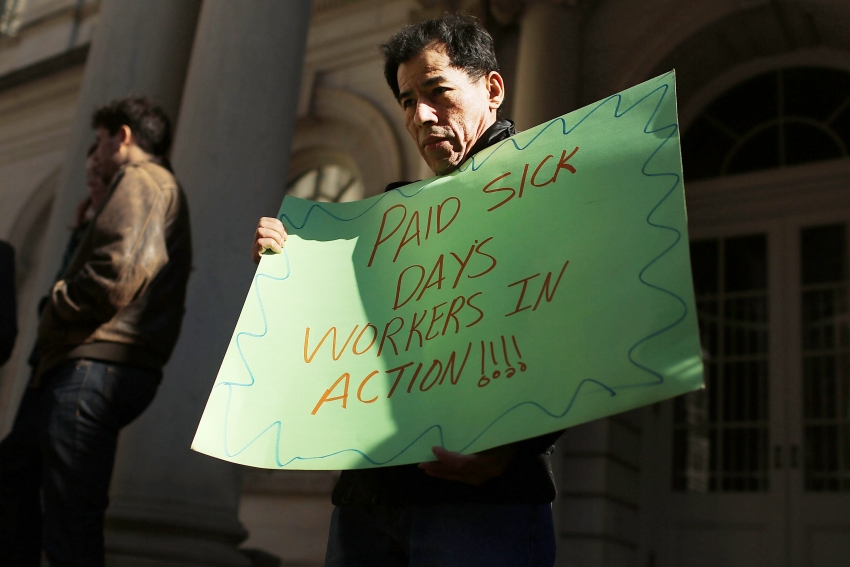 San Antonio recently became the 33rd city in the country to pass paid sick leave, but the law may be preempted by the state. (Photo by Spencer Platt/Getty Images)

On August 16, the San Antonio city council voted 9-2 to pass a paid sick leave ordinance that will allow residents to earn an hour of time off for every 30 hours worked up to six days a year at small employers and eight at larger ones.

The United States is alone among 22 wealthy countries in having no national guaranteed paid sick-leave policy. As a result, states are left to pass their own laws, and in those like Texas where GOP legislatures stand opposed to paid sick leave, it’s up to the cities.

San Antonio became the 33rd city in the country to take such a step, and the second in the South after Austin passed a similar law in February.

The very day after San Antonio’s ordinance passed, an appeals court temporarily put Austin’s law on hold in the midst of a lawsuit brought by the conservative Texas Public Policy Foundation— a member of the Koch-backed State Policy Network—that claims the law violates the Texas Minimum Wage Act.

Even if that lawsuit fails, many Republican members of the Texas legislature have vowed to pass legislation to block such local progressive laws throughout the state. Lawmakers are expected to take up broad preemption legislation as a top priority when the next legislative session begins in the new year.

Texas cities have watched the state erase their laws before. After he took office in 2015, Gov. Greg Abbott pledged to preempt cities’ ability to pass their own ordinances. In 2017 he explained this decision would “continue our legacy of economic freedom” and “limit the ability of cities to California-ize the great state of Texas.” In 2015, the state blocked cities from regulating oil and gas drilling activity, including fracking, and it has also banned local laws that would create sanctuary cities.

It’s a growing trend in legislatures controlled by Republicans. At least 25 states have passed preemption laws that block cities from raising the minimum wage, and 20 have banned cities from instituting paid sick leave. The majority of these laws have been enacted since 2013 and advocates for higher workplace standards say the trend is only accelerating.

Texas advocates for paid sick leave haven’t given up hope, however. They plan to wield the sheer amount of popular support for these ordinances in their favor and against the state politicians who block them. “Our state leadership is out of touch with what the majority of Texans believe and want for their communities,” says Michelle Tremillo, executive director of the Texas Organizing Project, a community organizing group behind the paid sick leave ordinance.

Two years ago, the Texas Organizing Project began surveying working families in San Antonio about what issues were most important to them and what would most improve their lives. “It was very clear…that issues addressing economic security were at the very top of the list,” Tremillo says. Number one was access to jobs that pay well, but in Texas only the state can raise the minimum wage, followed by benefits and the ability to get paid time off for illness, understandable since an estimated 350,000 city residents don’t have access to paid sick days.

Advocates also eagerly watched what happened in Austin. “It just made sense that we would figure out how to make that happen in San Antonio as well,” Tremillo says.

Her group and others decided to take the issue directly to city residents. In San Antonio, anyone can put an issue before the city council by collecting signatures from 10 percent of the eligible voting population in the previous municipal election. If they succeed, the city council can either decide to vote on the topic directly or reject it, thus sending it to the ballot for voters to weigh in on. To hit the 10 percent requirement, paid sick leave advocates needed to collect at least 70,000 signatures to force the issue.

Within ten weeks they managed to collect more than double that number, eventually receiving more than 144,000. “The response was forceful. People wanted to sign it,” Tremillo says. “People understand immediately how important that basic right is, it is a basic right to take care of yourself and your family.”

It was the first time in Rey Saldaña’s seven years on the city council that he saw any issue get above the 70,000-signature threshold, he says. “It was an easy sell, easier than many folks had actually thought,” he says. Surprised at the level of support behind the issue, the mayor and Saldaña’s fellow council members decided to take it up and pass the ordinance themselves.

Saldaña, who supported paid sick leave from the beginning, chalks the support up to the fact that so many people in the city work in the service industry where paid sick day are uncommon. “Many of them know what it feels like to have to make decisions between going in sick or taking a pay cut that week,” he says. “[But] they didn’t realize that they had that power to try to ask the government to step in and intervene on some of the pressures they have in life.”

That support, he believes, will make it hard for state lawmakers to reverse the progress made. “The time is going to expire on the state of Texas’s ability to ignore that issue,” he says.

But that only adds urgency to the campaign to protect the laws that cities have passed on their own. Advocates pledge to keep up the momentum no matter what the state does. “We will continue to fight at the city level and at the state level for what people really need and want,” Tremillo says.

And she notes that San Antonio’s experience, with over a hundred thousand people voicing their support, shows that the state is up against a swell of popular support. “These are large numbers of voters and people in our community who are demanding improvements to working conditions,” she says. “I think our numbers are only going to get bigger. I think people are going to stand up against our state leadership… We’ll continue to increase the number of people participating in our democracy.”

She adds, “They should stay out of interfering with what our cities are doing and they should start listening to the needs of regular Texans.”