Chicago Teachers Are Threatening To Strike Against New Mayor Lori Lightfoot. Here’s Why. 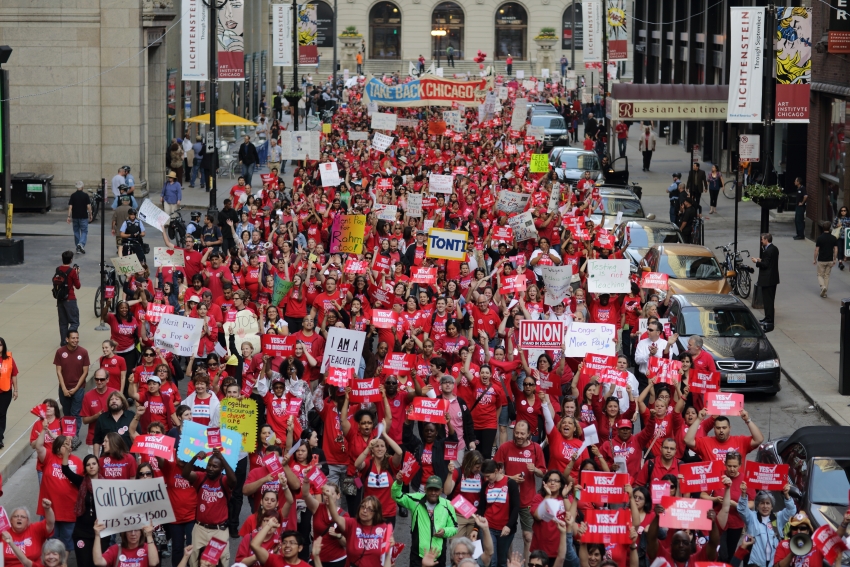 In 2012, Chicago teachers went out on a historic strike. (John Gress/Corbis via Getty Images)

In 2012, the Chicago Teachers Union (CTU) took to the streets with thousands of supporters in a seven-day strike that was ultimately seen as a victory against “Mayor 1%” Rahm Emanuel.

A lot has changed since then. The recent wave of teachers strikes and walkouts across the country—from West Virginia to California—has won significant gains, not only in compensation for teachers but also in student resources and overall respect for public education. Back in Chicago, Emanuel and his hand-picked corporate school board have been replaced by Mayor Lori Lightfoot, a black lesbian whose campaign platform on education largely mirrored the CTU’s agenda, and a school board comprised largely of educators and community leaders.

Still, after months of negotiations with Chicago Public Schools (CPS), the powerful teachers’ union may again go on strike in the fall, with the union demanding Lightfoot make good on her promises. Union leaders say that contract talks have changed little since Emanuel’s departure, with the Lightfoot administration continuing a “unilateral” approach, in CTU President Jesse Sharkey’s words, even when taking positive steps like announcing the hiring of hundreds of more nurses and social workers.

More nurses, counselors, social workers, librarians and paraprofessional staff such as clerks and teachers’ aides are among the key demands of the union, which wants those changes quantified and enshrined in the contract. In a system with over 500 schools, the union notes that there are only 128 librarians, down from 454 in 2013, and schools with a full-time librarian are concentrated on the wealthier, whiter North Side.

There are only 108 school nurses, and most schools have a nurse present only one day per week, according to a fact-finding document produced by the union as part of the contract negotiations. The National Association of School Nurses recommends one nurse for every 750 students, according to the document, while CPS has one nurse per 2,859 students. School social workers similarly handle five times as many students as recommended by the National Association of Social Workers. The union says the recently-announced hiring will only make a small dent in the school system’s need, and that the move needs to be negotiated and codified with the union.

“As a candidate, Lori Lightfoot put out a bold vision for transforming public education in Chicago, one that was largely cutting and pasting from the work we’ve been doing over the last decade,” said CTU Vice President Stacy Davis-Gates. “The mayor though has not set up the infrastructure to make that happen. Her team at the negotiating table is the same team that Rahm Emanuel had at the negotiating table. I think it’s pretty impossible to have a transformative lens but employ some of the same people who have been responsible for closing 50 schools and dismantling special education services.”

Most of the union’s key demands are aimed at bolstering the quality of public schools and students’ experience, including by increasing the budget for school sports and trades programs as well as improving special education. The union is also demanding CPS take a stand on larger issues that affect students, parents and educators, by curbing charter school expansion, supporting campaigns for affordable housing policies and officially designating the school system a “sanctuary” for undocumented people. The CTU gained sanctuary school provisions in contracts this year at a number of charter schools the union represents, after striking at three different charter networks.

The Lightfoot administration, which did not return requests for comment, has so far largely ignored such issues in its offers and its write-up to an independent fact-finder meant to inform the negotiations. That fact-finder is expected to release its official report on Aug. 26.

The administration has emphasized what it frames as generous raises for teachers. However, the union says the proposed raise of just under 3 percent per year is unimpressive, noting that the administration’s proposal would also force union members to pay more for health benefits, partially negating the impact of the raise. Thanks to a state law that changes funding formulas and other sources, CPS has about a billion more dollars available annually than in recent years, according to the union, which cites a study by the Center for Tax and Budget Accountability and a July 2018 school board financial outlook presentation. Yet students and teachers have not seen benefits from the additional funds.

CPS teacher compensation has lagged behind all other comparable large districts in the nation, according to data in the union’s report for the independent fact-finder. The report cites a 2012 study by the University of Illinois showing that CPS teachers work on average 58 hours a week, including prep time in the evenings and on weekends. The median salary for CPS teachers stands at $75,180.

The union is also calling for better pay and protections for substitute teachers, to help address a chronic shortage—especially in the most troubled schools, where difficult working conditions make substitutes reluctant to take assignments. A “use-it-or-lose-it” policy for teachers' time off also exacerbates the need for substitutes, since teachers can’t be compensated for days off they don’t take.

And the union wants reform of evaluation procedures that tend to penalize teachers of color and teachers in the most economically challenged neighborhoods.

Dick Simpson, a former alderman and political scientist at the University of Illinois at Chicago who endorsed Lightfoot, sees the administration’s hardball approach as a “negotiating tactic” that “stems mostly from the Rahm Emanuel period." He hopes things will change once Lightfoot herself switches gears from the ethics reform work she has prioritized so far and gets more involved in the negotiations.

“There just isn’t enough money to do things that you might have agreed to,” Simpson added. “The issue is going to be: Can they find a compromise position that recognizes the financial limits but at the same time makes the teachers feel valued and that they’re getting some financial help from the system?”

When the administration makes a final offer, the union will bring it to their members and potentially take a strike vote, with Sept. 25 the earliest date they could legally strike, according to Sharkey. The school year is set to begin Sept. 3.

Sharkey said that the administration is currently “on a collision course” with the union. Whether through a strike or not, he’s hopeful that Chicago will see the kinds of victories that teachers recently gained in other states, including in Los Angeles where a week-long strike in January led to commitments to hire nurses and librarians, cap class sizes and raise salaries by 6 percent.

Davis-Gates added that the union’s current fight in Chicago is part of an ongoing national trend “because racism is a national trend.”

“Students are told to grin and bear it because we do not find value in their communities,” said Davis-Gates. “Teachers—because it is a profession dominated by women—are told to grin and bear it, because never in the history of our society have we respected the work women do. So I think yes, we will continue to see teacher rebellions across this country because sexism is still what it is, racism is still what it is. It’s my hope teachers everywhere continue to see their voice as an asset, and their ability to withhold their labor as their power.”