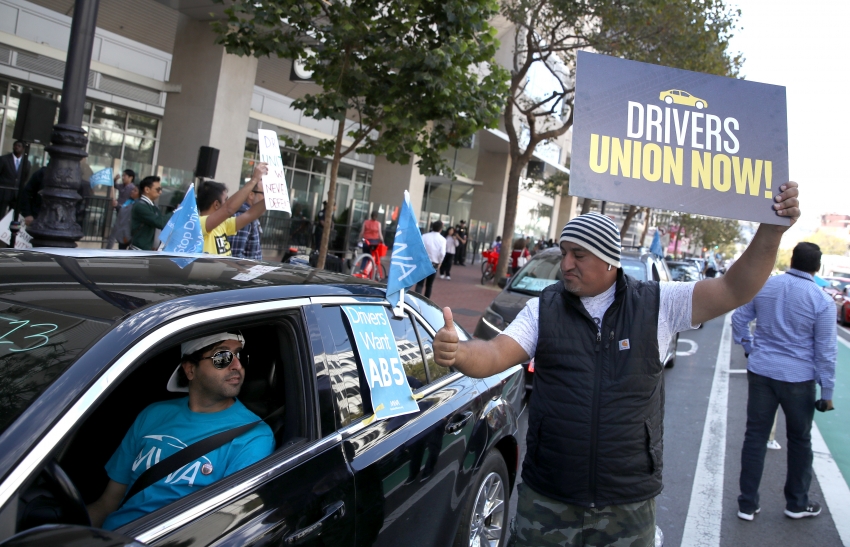 Rideshare drivers hold signs during a protest outside of Uber headquarters on August 27, 2019 in San Francisco, California. (Photo by Justin Sullivan/Getty Images)

The rideshare industry seems to have been on an unstoppable tear, running roughshod over regulations, filling the streets with cars, and making astronomical sums of Wall Street capital. But California just tripped up Uber and Lyft’s business model with pioneering legislation to rein in the freewheeling “gig economy."

The law, Assembly Bill 5 (AB5), passed overwhelmingly in the California Senate this week and is expected to be signed by Governor Gavin Newsom soon. It lays out a clear standard, the so-called “ABC test,” to ensure employers are properly categorizing workers as independent contractors, taking into account how much control the company exerts over their working conditions. Under the law, an independent contractor is defined as a worker with real autonomy: a person who (a) is not directly controlled by the company, (b) does work in the same trade or field independent of that company, and (c) is “independently established” as a proprietor of a separate business in the same sector. Under AB5, if you’re a rideshare driver whose entire livelihood depends on the rides your app funnels into our smartphone every hour, you’re likely an employee under California law.

The ABC test will codify the decision made in a landmark California Supreme Court case last year, Dynamex Operations West, Inc. v. Superior Court of Los Angeles. The Court ruled in favor of delivery service workers who argued they deserved to be classified as employees because they were forced to wear the company’s uniform and display its logo despite being legally deemed “independent.” A major goal of the AB5 legislation is to stop employers' widespread abusive misclassification of workers as independent contractors, in order to deny them regular employment rights and protections, often by insisting that their workers are merely app users.

Yet Uber and Lyft both continue to resist AB5, and Uber has even indicated that it does not plan to follow the law once it goes into effect at the start of 2020. The company argues that neither the companies, nor many of their drivers, want to be bound by state labor laws and prefer to drive Uber as a casual side hustle.

But thousands of drivers are already organizing in California for more power over their working conditions. According to Brian Dolber, an organizer with the California-based Rideshare Drivers United, a fledgling union of 5,000 drivers, AB5 paves the way to formal unionization. But Rideshare Drivers United has not yet decided on what form the union will take. For now, he said, "We're really putting drivers' voices first." Dolber added, "We want to continue organizing drivers and have drivers decide how they want their union to be structured.’

Critics of AB5 point to the potential loss of “flexibility” once gig workers are regarded as  employees. However, labor advocates dismiss the flexibility question as concern trolling by the bill’s corporate foes. Nayantara Mehta of the National Employment Law Project argues that current labor laws do not automatically exclude jobs with irregular hours, such as union nurses and construction workers, from being employees. Besides, AB5 deals with the degree of control a company exerts over a worker, not how the schedule is set. “Courts have found that just because a worker has a flexible schedule doesn’t mean she is somehow transformed into the operator of her own business—the true benchmark of independent contractor status,” writes Mehta.

Moreover, the fixation on flexibility elides the reality of many gig jobs. Workers’ schedules may be unstable, but not by choice: Often workers are glued to their phones so they can scramble for whatever rides pop up on their phone, or get paid for each manicure they do or each burger they deliver. Their pay could be so dismal that workers “flex” themselves into exhaustion.

This is not the first time Uber’s independent contractor system has been challenged. Various lawsuits in recent months have sought to establish workers' formal employment rights, with mixed results. Uber managed to wriggle out of two lawsuits in March, which together settled for $20 million with 13,600 drivers—but did not address their status as non-employees. Meanwhile, growing efforts to organize rideshare drivers, particularly the New York Taxi Workers Alliance, have helped win increased labor protections at the state and local level, including a minimum wage for drivers in New York City.

Facing the prospect of their payrolls becoming saddled with thousands of brand new workers, gig-company executives are panicking. Uber and Lyft spent a total of about $750,000 lobbying the California legislature, alongside other professional and industry associations that sought exemptions from the law. In the end, Uber and Lyft were not granted the carve-out they were hoping for in the bill, but other trades—including real estate and insurance agents, doctors, engineers, architects and lawyers—were exempted.

Now Uber, Lyft and DoorDash are reportedly joining forces to fight AB5 using a time-honored California political strategy: investing $90 million on a ballot initiative asking voters to overturn the law and erect a different legal regime for gig workers, which might include some weaker benefits and pay standards.

So the gig economy's leading lights are bent on fighting the law until the bitter end. But in this next round of legal battles, California’s new law, which is based on a Supreme Court ruling and reflects growing public disillusionment with the gig economy titans, might finally put the brakes on the platform economy’s regulatory rollbacks.

Moore is hopeful that the law can help narrow the gulf between Uber executives and drivers. “There's no difference between my humanity and their humanity, sha says, adding: "The basic American agreement is that yes, be innovative, become a millionaire, build your own business, but the American compromise is that you will need to share some of those millions with the people who do the work in your company, so that they can also afford to take a Lyft."