Will GM Workers Stay Out On Strike In Hopes of a Better Deal? 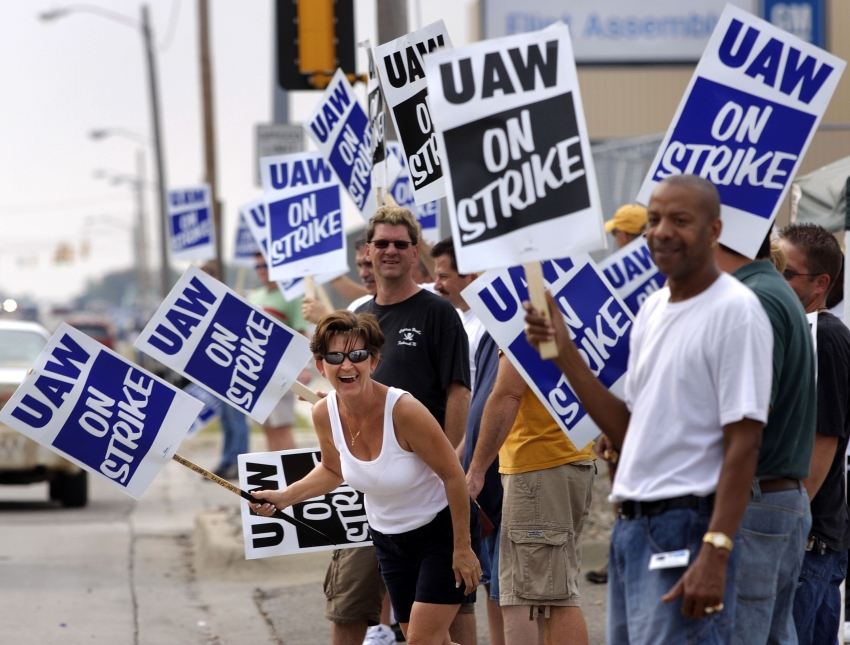 “They always say it will take multiple agreements to reach equality—we can’t win it all in one go,” said Sean Crawford, a second-tier worker at Flint Truck Assembly in Michigan.

For Crawford, the GM strike, the longest at a Big 3 company in 50 years, was the best chance the union had to put an end to the many tiers that have fractured the workforce.

“This is the third contract since the 2009 bankruptcy—that is a third of a career,” Crawford said. “If we don’t get this now, when GM is more profitable than they have ever been, when will we ever get it? So no, I don’t support the contract.”

GM’s profits were $35 billion over the last three years.

After nearly six weeks on the picket lines, auto workers will make a sobering choice: accept the agreement proposed or vote no and stay out in the hopes of getting something better. In 2015 Chrysler workers rejected their tentative agreement 2-1 and sent bargainers back for more. GM workers, voting later, approved their pact by just 58 percent for production workers; skilled trades voted it down.

UAW leaders decided that workers will remain on strike during the ratification vote. Voting will end Friday, October 25 by 4:00 p.m.

The contract makes some gains. Workers will receive 3 percent raises in the first and third years of the contract and lump-sums equal to 4 percent of annual wages in the second and fourth years. Second-tier workers, who until now were on an eight-year track to get within a few dollars of first-tier workers’ pay, will now top out at equal pay—$32.32—at the end of the contract, a shorter four-year track. The cap on profit sharing has been lifted and a pathway has been created for thousands of temporary workers to become permanent once they’ve been temps for three years.

“In January, they will convert 850 temporary workers and will continue converting each month after that as people get their time, so they will convert up to 2,000 in 2020,” said Tim Stannard, president of UAW Local 1853 in Spring Hill, Tennessee.

John, a 35-year worker at Detroit-Hamtramck Assembly, said on the picket line today, “What we're getting is what we're going to get. It's not a bad-looking contract.” Was the strike worth it? “Yes. The temps got moved up. There’s decent raises. Health care stayed the same.”

Even with these gains, though, GM has maintained all the tiers that it had before. Second-tier workers—those permanent employees hired after 2007—will still receive a 401(k) for retirement rather than a defined pension. They are not eligible for retiree health care, and their Supplemental Unemployment Benefits when laid off will last half as long as first-tier workers’.

GM workers at warehouses and at four “components” plants will continue to make far less than assembly workers, with an eight-year grow-in.

And temporary workers will continue at pay barely more than half that of Tier 1 workers. GM can continue to use them as probationary employees--with a very long probation.

“I know the language says that temps will be in progression to be hired in as employees after so many years, but they are still using temps,” said Beth Baryo, a materials handler at a parts warehouse near Flint.

Under the new agreement, temps hired after January 1, 2021 who maintain two years of continuous employment must be hired on as permanent. Temps can be laid off for up to 30 days and still maintain continuous service.

“As sure as god wears sandals, you know that GM will lay people off for 31 days,” said Baryo. “I don’t trust anything they will say.”

What they didn't win

The biggest sting of all was the shuttering of Lordstown (Ohio) Assembly, Warren (Michigan) Powertrain, and Baltimore Powertrain, which GM announced last Thanksgiving. Every contract cycle, GM closes more plants and every contract cycle the UAW claims to have stronger language to protect jobs.

The steady procession of concessions was also sold as a job-saving measure and yet the number of union auto workers employed by GM has dropped from 470,000 in 1979, when concessions began to the Big 3, to less than 50,000 today.

Many of the concessions made in 2007 and 2009 are still in effect, showcasing just how challenging it is for the union to get out of the hole it is in. Those include a cost of living allowance and overtime pay after eight hours (many plants now work regular 10-hour days without overtime pay). Tier 2 workers got nothing for retirement. Future Tier 1 retirees got one $1,000 lump sum.

How will they vote?

As often happens in a strike, many people unhappy with the agreement predicted that other people would vote yes. “People are going to say yes because of the money,” said Adriana Jaime, a 21-year worker at Detroit-Hamtramck Assembly, at the picket line today. “But for the weeks we've been walking here, it's not enough.”

One man said the offer was basically the same as what GM offered before the strike, except for the signing bonus (which increased from $8,000 to $11,000). “I'm not impressed,” he said. “But a lot of people want to get back to work.”

Jack Jackson, with 50 years, will vote no. “I'm mad as hell,” he said. “This contract was probably decided before we even went out and this was a show and tell, a little pony show.

“I hope it's good for the young folks. It should be 90 days and you're at full pay. This contract is really not for me. Give the retirees some money—our pension benefit has been the same for 12 or 15 years. You dedicate half your life to GM and they treat the retirees like an old horse they take out in the field and shoot him. We didn’t get the retiree issues—and the people coming behind me are going to retire someday too.”

Carla Duckett, with 37 years, says she’s “on the fence. I'm going to retire—I want to see what this leaves for those who have to stay.”

“The leadership is going to try and make the case that this is the best they can get,” Crawford said, “but if you look at the 2015 agreement, after Chrysler people voted that down, they came back with something significantly better.”

Aramark janitors also have an agreement.

The 850 Aramark janitors and skilled trades workers at five Ohio and Michigan GM plants who struck alongside GM workers were told yesterday that they also have a tentative agreement. They do work formerly done by GM workers, but at far less pay.

“Everyone makes $15. If you've been there 10 years you still make $15.” said Karen Cool, from GM’s Tech Center near Detroit. GM hired replacement janitors during the strike who, with police support, crossed picket lines there daily.

Economic constraints placed on the Big Three by the influx of foreign-owned, non-union automakers in the U.S. South are one of the forces outside the control of striking GM workers.

Even though GM has gone from bankrupt to profitable, the company is still losing market share to these non-union competitors like Toyota, Nissan, BMW, Honda, and Volkswagen. All use high proportions of temporaries and contract workers at will. The UAW has engaged in three high-profile organizing drives at Nissan and Volkswagen over the past five years, losing all of them.

Until the whole auto industry is organized, non-union employers will pay their workers less, give fewer benefits, hire more temps, and outsource more work, to gain a competitive advantage over their union rivals.

Chris Brooks is an organizer and writer for Labor Notes. Jane Slaughter is a former editor of Labor Notes and co-author of Secrets of a Successful Organizer.