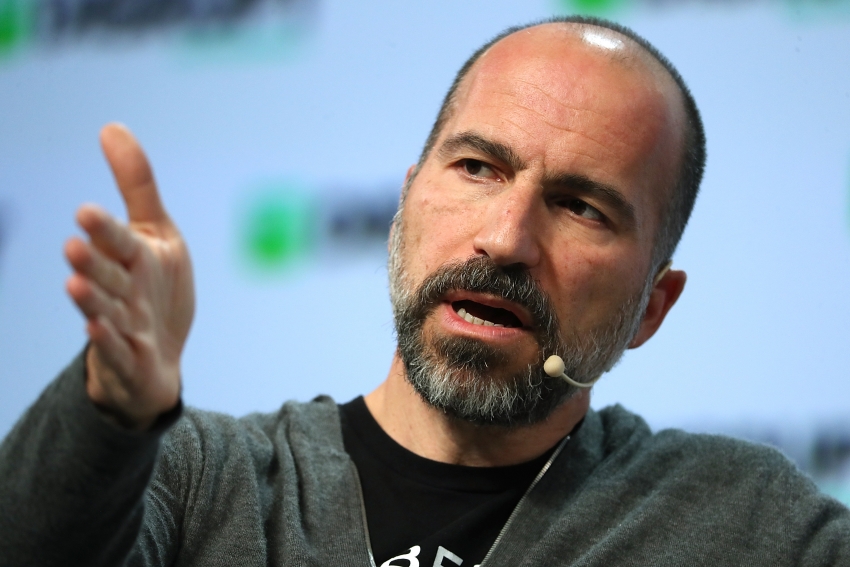 In an Axios interview that aired on HBO last Sunday, Uber CEO Dara Khosrowshahi made a troubling analogy. Discussing Uber’s ties to Saudi Arabia—whose sovereign fund is one of Uber's largest shareholders—Khosrowshahi described the assassination of Washington Post columnist Jamal Khashoggi as a “mistake” comparable to the company's own “mistakes” in reckless automation. This “mistake” was brushed off casually, with no mention of its place in the context of other Saudi “mistakes,” including an ongoing violent war against Yemen and a long history of brutally silencing domestic critics.

"It's a serious mistake," Khosrowshahi said, referring to the order from Saudi crown prince Mohammed bin Salman's to kill and dismember Khashoggi at the Saudi consulate in Istanbul in October of 2018. "We've made mistakes too, right, with self-driving, and we stopped driving and we're recovering from that mistake. I think that people make mistakes, it doesn't mean that they can never be forgiven."

The self-driving “mistake” Khosrowshahi alluded to was the death of pedestrian Elaine Herzberg, who was killed by an Uber self-driving car in 2018. According to documents released by the U.S. National Transportation Safety Board (NTSB) last week, there was “a cascade of poor design decisions that led to the car being unable to properly process and respond to Herzberg’s presence as she crossed the roadway with her bicycle.” She was thrown 75 feet in the air by the collision and died on site.

Though Khosrowshahi scrambled to backtrack his statement, his apology seems disingenuous given his previous record of emphasizing the importance of forgiving corporate wrongdoings. In a 2018 interview, Khosrowshahi defended Uber COO Barney Harford, who left the company after allegations of making racial slurs and sexist comments.

“I don’t think that a comment that might have been taken as insensitive and happened to report by large news organizations should mark a person,” Khosrowshahi said. “I don’t think that’s fair. And I’m sure I’ve said things that have been insensitive and you take that as a learning moment. And the question is, does a person want to change, does a person want to improve?”

Since its inception, Uber has faced a steady stream of public controversies. In 2014, former Uber CEO Travis Kalanick joked that the company's nickname was "Boober" because of the way it boosted employees’ sex appeal. That same year, it was also revealed that Uber’s self-named “God View” could be used to track riders’ locations, including the locations of journalists the company sought to intimidate. From spying on Beyoncé and competitors, to systemically underpaying drivers, to firing over 20 employees who filed sexual harassment claims, the company is quick to seek leniency for itself and drop its “mistakes happen” attitude the moment it turns its attention toward drivers.

In contrast to its internal corporate policies, Uber’s attitude toward drivers is unforgiving. Uber has a militantly single-minded emphasis on high ratings. Given this mindset, it is not surprising that Uber drivers are at risk of getting fired if they maintain a rating below 4.6. This policy remains unchanged, despite the fact that studies have shown that Uber’s rating system allows riders to express biases and evaluate drivers in ways that violate federal anti-discrimination laws.

When drivers are deactivated for low ratings they are told they can rejoin the platform if they complete costly, time-consuming training courses run by Uber’s third-party partners. Many can’t afford these classes already, due to Uber’s dropping wages and vanishing bonuses. Instead of getting training course discounts from the tech giant, however, this requirement remains.

The lack of sympathy is unsurprising given Uber’s history of holding drivers’ poverty against them. Who can forget the now-viral six-minute exchange, where former-CEO Travis Kalanick responded to a driver’s complaints about plummeting rates by telling him that he wasn’t a hard worker—that “some people don’t like to take responsibility for their own shit. They blame everything in their life on somebody else.”

Even when drivers have “worked hard” and excelled in their ratings, however, Uber still has ways to punish them. Any number of offenses can lead to deactivation, including, according to Uber, "certain actions [drivers] may take outside of the app, if we determine that those actions threaten the safety of the Uber community, or cause harm to Uber's brand, reputation, or business." Though some attempt has been made to clarify these guidelines, confusion remains. Drivers have been allegedly deactivated for a punishing range of issues, including allegedly reporting when passengers called them anti-Muslim slurs and making private Facebook posts.

Uber has a new CEO, but it’s still business as usual. The company’s continued operation is premised on forgiveness for the rich and powerful, and punishment for workers. Khosrowshahi’s statement shows this injustice remains, without any evidence of corporate self-reflection.

Audrey Winn is a Skadden Fellowship Attorney working and writing in New York City. She is passionate about workers' rights, algorithmic transparency, and the inclusion of gig workers in the future of the labor movement.