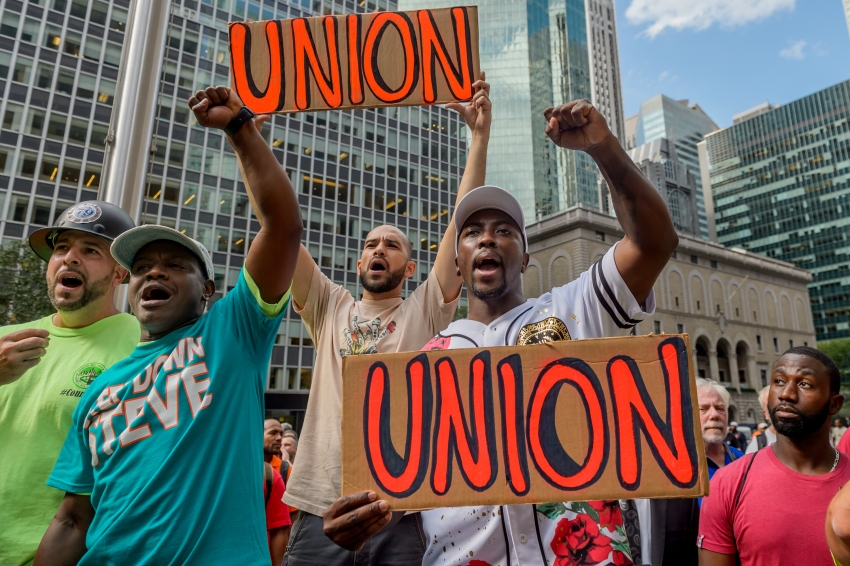 There is a shocking level of illegal interference in U.S. union drives. (Photo by Erik McGregor/Pacific Press/LightRocket via Getty Images)

Labor unions are more popular than they’ve been in over 15 years. Yet a record-low number of workers belong to them. The gap between the public perception of unions and their actual membership illustrates just how difficult it’s become for workers to organize.

In a new report, the progressive think tank Economic Policy Institute (EPI) found evidence that employers are increasingly brazen in seeking to obstruct workers' attempts to unionize. Records of the National Labor Relations Board (NLRB), which oversees private-sector labor rights and union elections, reveal that in more than 40% of the 3,260 union elections during 2016 and 2017, employers have been charged with unfair labor practices aimed at undermining electoral procedures and retaliating against pro-union workers.

About 30% of unfair labor practice (ULP) charges analyzed by EPI involved allegations of threats, surveillance or harassment of workers. Another 30% involved allegations of illegal discipline, with one in five elections marred by the charges of illegally firing workers for supporting the union. Workforce size is a factor: the highest rate of ULP claims—more than 50%—was seen among firms with potential bargaining units of 61 workers or more. The anti-union actions occurred at a higher rate during the two-year period than during the early 2000s.

This pattern of union busting could help explain why private-sector unionization has dwindled to just 6.4% in 2018. Ben Zipperer, co-author of the report, told In These Times that the study suggests “the hostile atmosphere towards labor, or basically the employer aggression against workers trying to form unions, is the main obstacle.”

In one case of election-related ULP claims, workers at Trump International Hotel Las Vegas, who sought to unionize with UNITE HERE in 2016, just ahead of Trump’s election, charged their employer with a number of retaliatory actions, including tightening supervision or increasing the workload of some employees, and “disparately enforc[ing] its new Grooming Policy” to coerce targeted workers into changing their hair color.

Although EPI does not cover the outcome of the cases (charges are often dropped and litigation might drag on for years), the prevalence of ULP charges is telling. It’s likely that the employees who file a formal legal charge represent only the fraction of workers who have the resources and wherewithal to wage a legal battle with their employer. After all, the most successful union-busting campaigns may be the ones that never come to light because the workers have been thoroughly suppressed—or ousted.

“Employers pursue a variety of tactics that would otherwise be illegal or unfair, that never make it to the charging stage,” says Zipperer, “because it's a very difficult and lengthy process with little reward for the worker at the end.”\

Filing an unfair labor practice charge is the basic tool that workers have to hold employers to account under the National Labor Relations Act (NLRA). To protect workers’ right to organize and maintain the integrity of union elections, under the law, employers cannot threaten to shut down a plant, or fire workers or take away their benefits if they seek to unionize. Bosses are barred from coercively interrogating workers about their union activities, or attempting to spy on them. The NLRA also broadly prohibits employers from discriminating against workers who support unionization—for example, by demoting or laying off workers who promote unionization to their coworkers.

While the NLRB should act as the central arbiter of labor relation, the agency has little leverage over employers that engage in union-busting. Typically, even if a company is proven to have acted illegally, the NLRB cannot force it to pay damages, beyond back wages and reinstatement. On top of those structural barriers, the current Republican majority on the NLRB ensures that whatever cases do go before the Board, there is a good chance they will result in an anti-worker ruling.

The overarching weakness of the NLRA is what it does not cover. Employers are free to deploy various anti-union tactics on their worksites, including broadcasting arguments against unionization and launching smear campaigns against the “third party” union organizers who threaten to undermine the workers’ relationship with their boss.

The market for anti-union tactics has given rise to a cottage industry of union-busting firms. Overall, EPI estimates that companies pour an estimated $340 million every year into “union-avoidance” consultants. Among the top spenders are Nestle, Fedex, Mission Foods and Trump International Hotel Las Vegas. The anti-union consultancies specialize in flooding workplaces with propaganda as well as orchestrating so-called “captive-audience” meetings, in which companies pressure workers to attend anti-union lectures.

Allegations of intimidation, retaliation and disinformation are at the center of recent clashes at Google, Housing Works and Johns Hopkins University Hospital—a purportedly progressive tech giant and two nonprofits—where workers have accused their employers of using dirty campaign tactics to crush union drives.

The current unionization drive by Hearst employees has prompted the company’s executives to set up a microsite featuring pointedly biased explanations of the consequences of unionizing, according to Vice. Workers were warned, “All terms of pay, benefits, and working conditions would be up for discussion. No one can guarantee in advance what that contract would include.”

Last April, Labor Notes reported that at a captive-audience meeting at a Volkswagen plant in Chattanooga, Tennessee, workers were bombarded with pro-business messaging from Gov. Bill Lee, who sang the praises of Volkswagen for bringing jobs to the state and telling workers it was best to “have a direct relationship” with the automaker, free of union interference.

While some aggressive anti-union practices are perfectly legal, EPI notes that the NLRA’s protections for workers' organizing rights can be strengthened simply by giving the law real teeth. The recently introduced Protecting the Right to Organize (PRO) Act would create civil penalties for abusive employers, ban captive-audience meetings and allow workers to press unfair labor practice claims in civil courts, rather than just the NLRB.

"One of the simplest things that we can do,” Zipperer said, “is we can actually make labor law matter by attaching meaningful and significant penalties to employers when they violate that law.”

Under the current legal framework governing union elections, the fact that unions remain so popular in public opinion surveys shows that despite the hostile political climate, workers still believe in the power of collective action. Imagine what might be achieved if labor law stopped getting in the way.