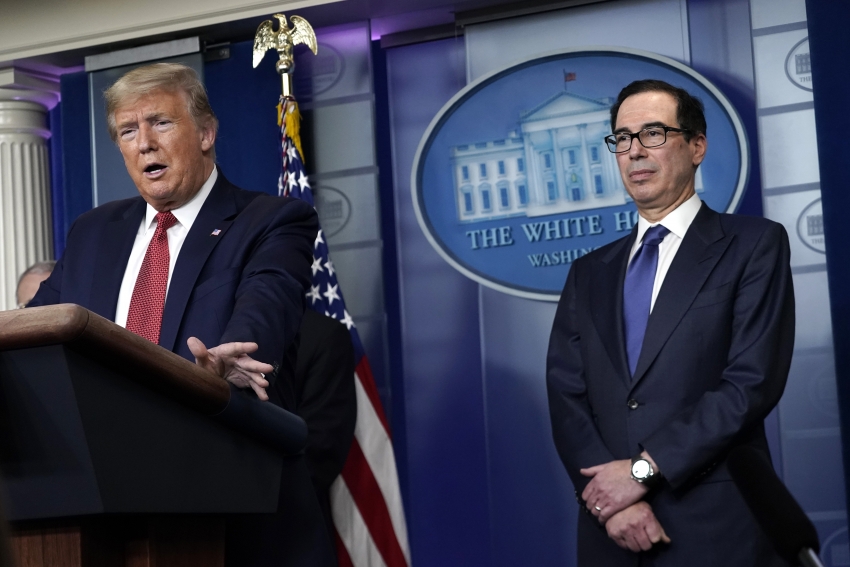 Protections for airline workers should be the standard for all workers. (Photo by Drew Angerer/Getty Images)

America’s aviation workers won a huge victory in the CARES Act. In the bill, Congress created a grants program that funds paychecks and benefits for two million hourly workers who were going to lose their jobs while planes are grounded. This isn’t a no-strings-attached corporate bailout for airlines. The money goes directly to flight attendants, pilots, mechanics, cleaners, caterers, and wheelchair attendants, so that we can stay on the job, on our healthcare, and out of the unemployment line. It should be a model for how we help all workers impacted by coronavirus.

This bipartisan agreement for workers-first relief could go off the rails now. At the eleventh hour, Sen. Pat Toomey (R-PA) tried to sabotage the program by requiring equity stakes in exchange for the payroll grants, i.e. “warrants.” A last-minute compromise to preserve relief for workers made such warrants entirely discretionary. On Capitol Hill, that’s what’s called a poison pill. In the bill, Congress intended that grants would actually be grants. But Trump Treasury Secretary Steven Mnuchin, so far, has shown little inclination to respect the will of Congress. His public statements imply that in exchange for keeping workers on the payroll for six months, the federal government could take stake in up to 40% of the airlines.

Under those conditions, the airlines will almost assuredly refuse the grants. And it will cause more job losses than our industry has ever seen. If Secretary Mnuchin insists on conditions that airlines can’t agree to, a million workers will get a pink slip in the near term and a total of two million will feel the pain of an industry in collapse on President Trump’s watch. That’s the opposite of what Congress intended and what the President promised. The entire point of the relief bill is to save our jobs, keep people connected to their benefits, and make sure aviation is ready to take off the minute we have this virus under control.

The federal government can take an equity stake in the airlines through warrants on the loans it provides to the companies instead. Warrants on loans make sense because when taxpayers step in to support a private company, the public deserves a share in the profits. That’s worked out well in the past. After 9/11, when airlines were reeling, the government took warrants in exchange for loans, and taxpayers made money. Even the conservative economist Douglas Holtz-Eakin of the American Action Forum, appointed by Mitch McConnell to the Financial Crisis Inquiry Commission in 2009, agrees that warrants on our paychecks make no sense, saying, “far from protecting workers, warrants are a potential assault on them.”

Warrants aren’t just destructive to the relief program, they’re unnecessary. The taxpayer return on the grants program is clear: no layoffs and no furloughs. Every dollar must go to wages and benefits. Two million workers keep paying taxes and stay off unemployment. And by keeping us on the job and on the tax rolls, our workforce will help keep the aviation industry intact during this crisis, able to provide essential services during this national emergency, and prepared to assist in the country’s economic recovery as soon as the “all clear” sounds. If a million workers are sent home, it could take months to get our industry back on its feet, and delay the whole country’s economic rebound. We don’t want our economy sitting at the gate, waiting for a flight crew to arrive.

Finally, these warrants are terrible for the flying public. If you think flying is too expensive or too uncomfortable now, warrants will make it much, much worse. Nearly everything consumers hate about air travel today is a result of past bankruptcies. Without payroll assistance that allows workers to keep their jobs, we’ll see more bankruptcies and consolidation in the industry. That means less competition, and more of the things consumers hate: smaller seats, fewer amenities, and higher and higher fees. The worst thing we can do right now is make demands on the airlines that will force layoffs, reductions in service, less competition and higher fees.

Aviation workers are trained to respond in a crisis. We’ve returned millions of Americans home to shelter, delivered critical medical supplies to healthcare workers on the front lines, and helped with the transport and care of coronavirus patients. We will protect access to air travel for small and rural communities and keep healthcare supply chains open. And we’ll be ready to lift off and support our economic recovery. But, to do that, we need our jobs. We oppose efforts to sabotage this program and we’ll keep fighting for aviation workers and all working people.

Sara Nelson is the president of the Association of Flight Attendants–Communications Workers of America.