The Plan Is to Save Capital and Let the People Die 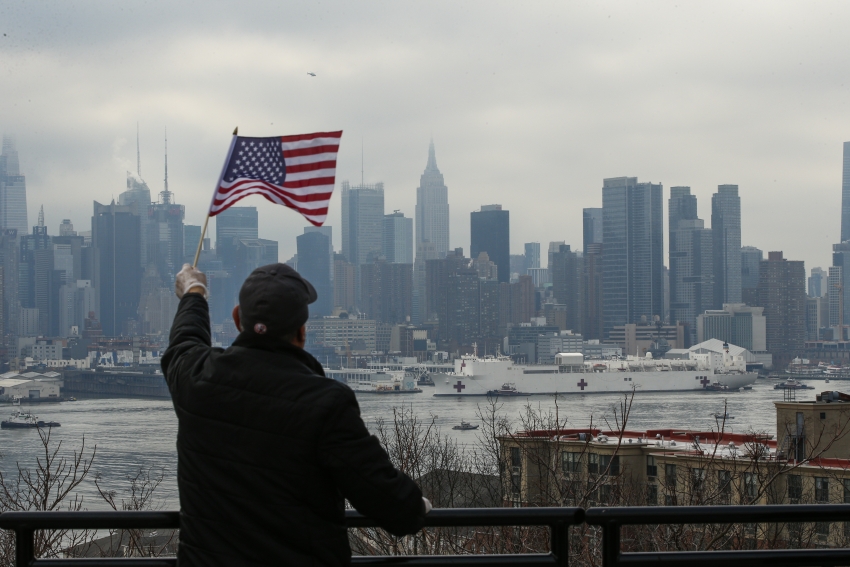 People watch the arrival of the USNS Comfort Ship on March 30, 2020 in New York as seen from Weehawken, New Jersey. The naval hospital has 1,000 beds and 12 operating rooms. The Comfort will not treat Covid-19 patients. (Photo by Kena Betancur/ VIEWpress via Getty Images)

Fantasize for a moment that we could set aside politics and operate based upon common sense. What would the federal government do to best mitigate the devastation that this pandemic will visit upon human beings? It would, first of all, provide free healthcare to everyone. It would distribute medical resources nationally based on the greatest need. Then, to protect people from the necessary economic deep freeze we are all in due to social distancing, the government would pursue measures that would get everyone through this time in one piece: It would subsidize the nation’s payrolls, so that workers could stay in their jobs and businesses could restart easily; it would suspend rent, for people and businesses alike; it would send everyone a monthly basic income to pay for necessities until this is over; and it would avoid allowing small businesses to go bankrupt, because those represent millions of jobs that people need to return to.

Those are all obvious steps to take if your goal was to protect humans. But imagine, instead, if you had an entirely different goal: protecting capital. What would you do then? Well, you would prioritize the health of corporate balance sheets, rather than human bodies. You would keep the healthcare industry, now booming, in private hands; you would stimulate consumer demand via unemployment benefits, rather than by keeping workers on existing payrolls, in order to create an enormous pool of cheap and desperate labor; you would pursue tax cuts for the investor class; you would welcome the opportunity to allow debt to pile up on individuals; and you wouldn’t be too sad about small businesses going bankrupt—they are, after all, just ceding market share to bigger, richer businesses. You would use this crisis to create a greater, not lesser, concentration of wealth. You would emerge on the other side with more, not less, inequality. The truth is, it would be easy.

Now, guess what the U.S. federal government is doing? It is allowing the unemployment rate to skyrocket, as tens of millions of workers are fired; it is allowing countless small businesses to go bankrupt, from incompetence and neglect; it has not even considered a national suspension of rent, nor a strong national policy of paid sick leave, much less a national system of free public healthcare; as millions of needy people struggle with decrepit and broken state unemployment systems and wait weeks or months for their emergency checks to come, and essential workers are forced to agitate or walk out to gain hazard pay, the administration plots a new bill featuring a capital gains tax cut and “a waiver that would clear businesses of liability from employees who contract the coronavirus on the job.”

We are told we’re a nation at war. In real wars, we have higher taxes on the rich. This time, we are giving investors a tax cut.

Whether Americans know it or not, their government is not working for them. Their government is working on behalf of capital. Humans are now a mere second-order, instrumental factor to be considered based on how it affects capital. In this perilous time, capital must be protected and nurtured, and we must draw resources from our entire society in order to help capital survive, in the same way that the body will draw blood from other organs to save the brain. People can be sacrificed—capital is irreplaceable. We are navigating our way through this so that capital comes out okay on the other side. It is no exaggeration to say that tens or hundreds of thousands of Americans will die because we are choosing this approach, rather than an approach that prioritizes human life. They will die because we did not dedicate resources before this pandemic to building an adequate system of public health care, and they will die because we made the decision during this pandemic to put the needs of capital first. We did not keep working people on payrolls, because that would be less advantageous for the owners of capital. We did not nationalize factories, nor pharmaceuticals, because that would be less advantageous to the owners of capital. And of course we did not release the prisoners in the jails being ravaged by this disease. What would that do for the stock market?

When this is all over, politicians will stand up and say that the heroes of this crisis were the doctors and the nurses and the grocery workers who kept going, because we needed them to. But that will not be true. Doctors are getting pay cuts because they are no longer making revenue for their employers with nonessential procedures; nurses are becoming sick and dying because we didn’t stockpile enough cheap plastic masks; grocery workers are forced to beg and plead and strike for a couple of dollars extra per hour, at the risk of their own lives. The true heroes of this crisis, from the perspective of those in charge, will be the private equity firms that rush in to buy up distressed businesses, and the hedge funds that pour money into cheap debt, and the investors that scoop up the homes that people will be evicted from. They are the ones that renew the blood of capital, you see. They are the ones that will rescue us. They are the ones who will shepherd our precious capital through this dangerous time, and into the promised land.

They will have earned their capital gains tax cut and legal protections and government bailout and their hefty profits. Where else do the ten million of you people who are now unemployed expect to get jobs after this? Hm? Be grateful. Your willingness to work for very little after this means that you may be valuable enough to make it profitable to not let you die. Congratulations.