Amazon’s Unlimited Unpaid Time Off Ends May 1, and Workers Say That Could Be Deadly 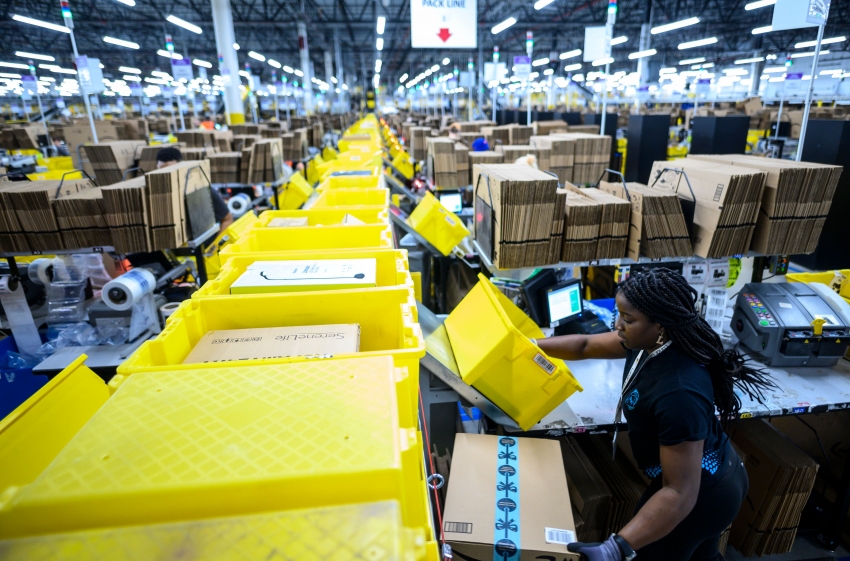 A woman works at a packing station at the 855,000-square-foot Amazon fulfillment center in Staten Island, one of the five boroughs of New York City, on February 5, 2019. (Photo credit should read JOHANNES EISELE/AFP via Getty Images)

Amazon warehouse workers across the country today decried the company’s decision to end a policy of unlimited unpaid time off, and said that working conditions inside Amazon fulfillment centers are putting their lives at risk.

Employees from New Jersey, Minnesota, Michigan and New York, working with Athena Coalition, said on a call today that a policy change announced late last week—which will replace the unlimited paid time off offered to workers as a response to the coronavirus crisis with a more restrictive policy at the end of this month—is “outrageous” in light of the very real level of danger that still persists for those forced to work in close quarters. “People have to choose, do I stay home and risk losing my job, or go to work and risk getting sick?” said Hafsa Hassan, who walked out of work yesterday in protest, along with about 50 colleagues at the Amazon fulfillment center in Shakopee, Minnesota.

Amazon’s announcement that it will roll back unlimited unpaid time off at the end of April means that employees will soon be required to apply to be granted leaves of absence if they must be away from work for health reasons, or to take care of children who are out of school, or to protect vulnerable family members. But employees say that system is confusing and broken, even for those who should qualify. Rachel Belz, an Amazon warehouse worker in New Jersey who also works with the activist group United for Respect, has not been at work since mid-March because of fears of infecting her family, especially her son. Her attempts to apply for a leave of absence, though, have resulted in multiple dropped calls, unanswered emails, and no response from the company. “H.R. is overloaded. You can open a case, and they won’t get back to you,” she said. “If you’re expecting people at a high volume to apply to these things, you need to work out the kinks in the system.”

Belz, who is in contact daily with other workers at the facility, said that the company’s attempts to keep the warehouse free of coronavirus are inadequate. Among the problems, she said: No soap in the bathrooms, cleaning supplies that are kept locked in cages that can only be opened by managers, and temperature screenings for workers that are being conducted using only a thermal camera—and workers who appear too warm are encouraged to go outside for a few minutes, cool down, and try again.

Amazon spokesperson Rachel Lighty said that “we are providing flexibility with leave of absence options, including expanding the policy to cover COVID-19 circumstances, such as high-risk individuals or school closures.” She also called Amazon employees “heroes fighting for their communities and helping people get critical items they need in this crisis.” The company had its first confirmed Covid death two weeks ago, when an operations manager at a California Amazon warehouse died.

Multiple workers said that their facilities lacked cleaning supplies, and that hand sanitizer and cleaning wipes are being kept in one location away from work stations, making it impossible to regularly sanitize your individual work area throughout a shift. They said that Amazon’s current hiring boom is making break rooms and common areas even more crowded, making proper social distancing impossible. They expressed doubt that the single mask being issued per person per shift is enough to keep them safe. And they described the unnerving experience of seeing fully protected cleaning crews descend on their job sites after a coworker reported testing positive for Covid.

Jordan Flowers, who works at the Amazon fulfillment center on Staten Island that has been the target of protests and walkouts in recent weeks, said that he knows coworkers who are now choosing to sleep in their cars, rather than going home and risking getting their families sick. “It’s frightening,” he said. Billie Jo Ramey, an Amazon worker in Michigan who has been taking unpaid leave since March after getting ill with Covid-like symptoms, fears what the policy change will mean for her, and for those around her. “I’m in no shape to go back. I’m at high risk,” she said.

Several workers noted the wealth of Amazon owner Jeff Bezos—who's gotten tens of billions of dollars richer since the beginning of this crisis, thanks to Amazon’s booming stock price—and contrasted his resources with the lack of resources they feel they’re being given on the job. “That’s not just terrifying,” said Rachel Belz, “it’s pathetic that we can’t trust a trillion-dollar company to do the most basic thing, which is to clean.”