Bernie Lost Because America Doesn’t Have a Strong Labor Movement 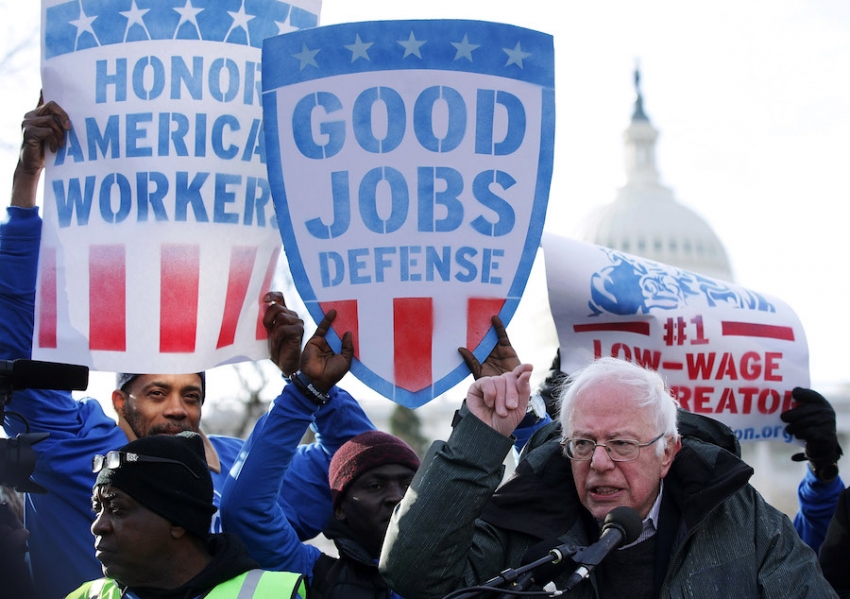 Sen. Bernie Sanders (I-Vt.) speaks at a rally on Capitol Hill "to fight back against the Republican war on the working class" in February 2017. (Photo by Alex Wong/Getty Images)

I was in Las Vegas for the Nevada caucus in late February (ah, a different and simpler time!) and the reporters on the ground—including me—believed Bernie Sanders was poised to go forth and win the Democratic nomination. A few short weeks later, it was clear it was not to be.

Bernie had money and name recognition and a villain to run against. Yet he also had, it turns out, a ceiling of about a third of the electorate.

Growing that base into a majority is the central task of left-wing electoral politics. Most campaign postmortems focus on tactics or strategy: messaging that could have been tweaked, personnel changes that could have been made, gaffes that could have been avoided. Less often do they look at the nature of the electorate itself. The simplest version of the Bernie Sanders theory of winning could be expressed as, “A true left-wing candidate and campaign will attract support and drive new voter turnout because the policies are actually what’s necessary to fix our most pressing problems.” That made sense to me, but did not turn out to be true. It was completely predictable that the Democratic establishment would unite to try to stop Bernie. Had his theory been true, though, the establishment would have failed in the face of a massive upswell of voter support. Instead, when all of the smoke cleared, Bernie’s share of the vote in key primary states never rose much above a third.

The political Left does not need to be forever frustrated by the process of using campaign speeches to drag a skeptical or disinterested 18% of the public into enlightenment every four years. Elections are not the time to magically instill mass class consciousness; that has to be done between elections. And it will not be done by politicians, no matter how good they are. It can only be done by giving millions of people the firsthand experience of class consciousness in their own lives.

The only institution that can do that is the labor movement.

I have witnessed countless people who considered themselves fairly apolitical participate in a union drive at their workplace and emerge as fire-breathing advocates of equality and worker power. They were transformed not by reading a book nor by watching MSNBC, but by personally experiencing the reality of the class war that Bernie and his allies talk about. Coming together with your coworkers and organizing and fighting the boss for a raise and better treatment is a tool for radicalization more powerful than a million tweets. In a union drive, it does not matter if someone is young or old or black or white or Democrat or Republican; they practice solidarity, they fight and they win—often while a richer person with a bigger job title uses lies and threats to try and stop them. It is a demonstration of the truth of what the Left is always saying, without having to hear it from a media personality or politician they might despise. Participation in the labor movement earns people a union, a raise and a political awakening all at once.

Frustration at the existing power structure is bred by a lack of opportunity. The question at hand, then, is how to channel that frustration. If many more Americans had the chance to experience the magic of organizing at work, they would tend toward leftism and justice more than hatred and fascism. Because they would have a model of socialism working in their own lives.

As it stands, only one in 10 working people are in unions. It’s not enough. The Democratic Party has neglected the labor movement (to its own detriment, since the party feeds on union money), so it remains up to the Left to galvanize new organizing campaigns.

Build the labor movement and watch the electorate change. That’s when the left will find its power. Water the grassroots. We don’t need to constantly fret about changing tactics; we need to change people.