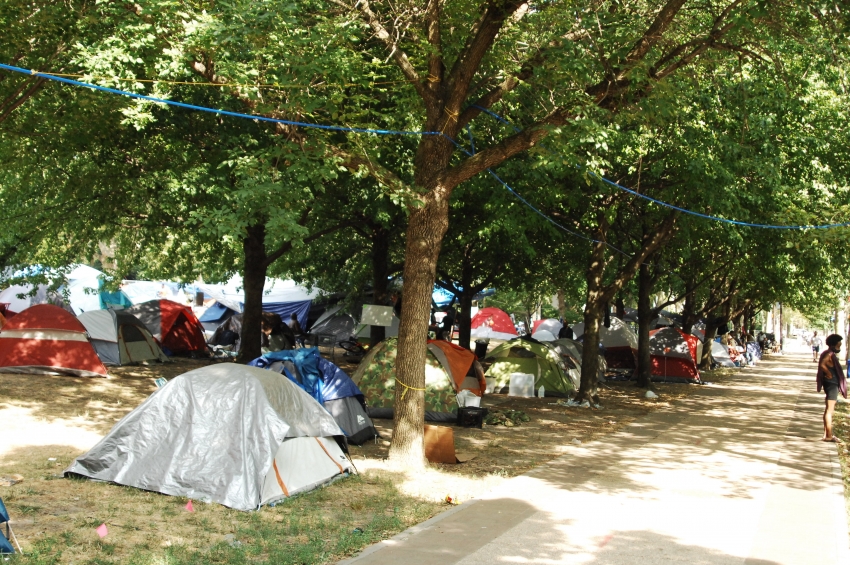 A homeless encampment is nestled in a park at 22nd Street and The Benjamin Franklin Park Way. (Photo by Cory Clark/NurPhoto via Getty Images)

In the beginning, they called it “Camp Maroon,” harkening back to the runaway slaves who built their own free communities in the Americas. Then it was called James Talib Dean camp, named after one of its organizers, who passed away in June. Then it was called Lakay Nou, meaning “our home.” To many in Philadelphia, it’s simply known as the encampment on 22nd Street and Benjamin Franklin Parkway, stretching a full block down the handsome, leafy avenue leading up the Philadelphia Museum of Art. But you could also call it an inspiration.

It began on June 10, with just five tents. In just days it became 50 tents, and then 100. After two weeks there were well over 100, hosting what organizers say is more than 200 residents. There are now handwashing stations, fed by a skinny blue hose plugged into a nearby water fountain and then strung overhead through the trees. There are showers. There is a medical tent. There is free Covid-19 testing every Monday. There is a kitchen. There is a charging station, accompanied by the constant hum of several generators. There is an ad hoc security force, made up of residents. There are free supplies, for bedding and cleaning and personal hygiene and personal protective equipment (PPE). There is a donation tent, a garden and, on the fence of an adjacent baseball field, there is a big white canvas hung up upon which films are projected for regular movie nights. Where there was once just empty grass, there is now something approaching a community.

Beyond the immediate impact of this enormous encampment—the shelter and safety and resources that it provides to vulnerable people at a vulnerable time—one of its most notable qualities is that it was conjured up completely outside of what critics call the "nonprofit industrial complex," a system that is held in contempt by the camp's organizers.

“You’ve got people saying they’ve been ‘working in homelessness’ for 20 years,” says Alex Stewart, derisively. He is sitting on a long bench in the midst of the camp that he helped create on a hot day in late June. “That only benefits them. Because homelessness is a problem that shouldn’t exist for 20 years.”

Stewart, one of the lead organizers, is a founder of the group Workers Revolutionary Collective. (James Talib-Dean Campbell, who died after the camp was built, was another.) Stewart has worked for nonprofits himself, but grew disgusted with what he saw as their self-serving nature, as employees took home healthy salaries while the people they were supposed to be helping remained in crisis. The encampment is a manifestation of the “just do it” approach to organizing: See a problem, do something about it, cut out all the middlemen.

Still, the encampment did not spring up from nothing. Its success is a product of months of work on the underlying issues by many of the people who put it together. “We’ve all been doing this work separately. We really have values in line with each other,” says Sterling Johnson, a Philadelphia activist who helped organize the camp. “The people’s economy, being anti-racist, wanting to center the people who have been through some things. Everybody in these groups have been through some trauma.”

The majority of the residents and the organizers of the camp are Black people, acting with a sense of strategic desperation during a time of crisis. Earlier this year, Alex Stewart and others began feeding homeless people in the city several times a week, just to build relationships. The same group of activists also helped homeless people quietly move into vacant, city-owned houses. (Stewart says they have housed 50 people this year, and that he has scouted 500 vacant homes.) That work gave them both the credibility and the contacts to pull off the audacious encampment that has now risen along the city’s most prominent thoroughfare.

All of the organizers stress that the residents are the ones who came up with the idea of the camp, and who are leading it. Volunteers help run the medical tent, and donations pour in from the community at large, but there is no outside institution supporting this thing. “The homeless are organizers,” says Tara Taylor, who herself is both an organizer and resident of the camp. They know their communities. It’s their word of mouth and their community connections that allowed the camp to grow.”

And grow it has. Everyone I spoke to at the camp said that they heard about it within the first few days of its existence, by word of mouth. George, a 47-year-old man, who had been staying in a tent on Parkway for two weeks, said that life on the streets of Philadelphia got noticeably harder after the coronavirus struck: Stores and other businesses shut down, downtown emptied out, and and the center of the city was left with homeless residents and little else. “You don’t have that many opportunities. Every place is locked down. You don’t have much to work with. Plus you’re more susceptible to catching [Covid-19] than anybody.” He said that the encampment was, at least, preferable to life before it existed. But asked if he would be satisfied to be left alone there, he scoffed. “Hell no! I don’t want to stay out in a tent. Nooooo.”

Although he receives a monthly disability check, he says that he has been told that the wait for public housing is seven years long.

Permanent housing is what the people want. Permanent housing is what they need. And permanent housing is at the heart of the demands posted at the camp. They ask for a community land trust of vacant properties for conversion to low-income housing; a moratorium on the sale of city-owned properties to private developers, until everyone in the city is housed; an end to the city’s sweeps (or “resolutions”) of homeless people and encampments; more tiny houses, paid for with public funds; and for the Parkway encampment to be allowed to remain as an autonomous zone, without intrusion from police.

Though the city of Philadelphia has not greatly harassed the camp thus far, it is clear that that may soon change, demands notwithstanding. Mike Dunn, a spokesperson for the city, says, “We have been negotiating with the leaders of the camp for the past several weeks to try to arrive at a cooperative resolution in which the camp disbands voluntarily by mid-July and everyone there has a plan.” He adds, “We have also let the leaders of the camp know that it cannot go on indefinitely. We are prepared to impose a timeline this week if needed. We are prepared to offer the services that people need and want and to use this situation as a starting point for reforms that will take longer to achieve.”

That sounds rather ominous, considering the fact that one of the camp’s defining characteristics from the beginning have been its self-reliance and its rejection of both assistance and meddling from the city or from established nonprofits. Alex Stewart says that for the first two days, the camp allowed in outreach workers. “The only thing they offered people was granola bars and water,” he says. “We have plenty of that. They couldn’t offer shelter.”

Tara Taylor echoes that sentiment. “It’s not because we don’t want the services,” she says. “It’s because the services being offered aren’t sufficient, they aren’t rendered in a way that’s humane, and folks don’t want to be gaslighted that this is supposed to help them, when it’s not.”

America is in the midst of both a pandemic and a global economic catastrophe. Millions have become unemployed through no fault of their own. The emergency eviction moratoriums that were put in place after the coronavirus struck are already expiring, and the emergency unemployment payments that have kept countless people afloat are set to expire at the end of this month. We are at the precipice of a nationwide eviction crisis for which there is no real plan. The concrete achievement in Philadelphia—the creation and maintenance of a camp with tangible resources for hundreds of a city’s most vulnerable and needy people—is not a full solution to homelessness, but it is an example of what a handful of dedicated, radical people can do in the midst of what feels like the all-encompassing decay of our social safety net. As much as we are living through a period of chaos, we are also living in a time of opportunity for activists everywhere.

Adam Gottlieb, an activist and homeless organizer in Chicago, says the pandemic has made the day-to-day work of homeless outreach much more difficult. “It’s really hard to practice any form of public health safety protocols under these conditions,” he says. “‘Shelter in place,’ by definition, requires shelter. It’s a non-starter for people living on the streets.”

Still, he too believes that the ongoing crises have made conditions “much more favorable” to radical social justice organizing of all stripes. The Black Lives Matter uprisings have inspired many activists to be bold. Gottlieb sees the Philadelphia encampment’s militant commitment to self-sufficiency and its prickliness about outside control as a reaction against universal problems in how ostensibly helpful institutions often treat the homeless. “They end up relating to people as powerless victims who can’t do anything for themselves. It becomes a destructive spiral,” he says.

The activists in Philadelphia say they are determined to avoid that trap. But the city’s patience with their experiment is running short. Activists say they have not heard any hard deadlines yet, but expect to soon. For now, the community survives. And the people in it, who are not usually given control over their own lives, have at least one more day at Lakay Nou.

During the sunny midday hours in June, a tall, skinny young man named Don sits down on a bench on the side of the Parkway, a block away from the encampment, where he has been staying. He says he is looking for god, but all the churches are closed. He wears a disposable paper mask over another cloth mask. He sits out here, as time passes slowly.

“Imagine you’re a fish. And coronavirus is the bowl. And God puts you in the bowl. Now, how are you gonna feel?” he asks. “Trapped.”