Cesar Chavez, and the State of the Farm Workers Movement 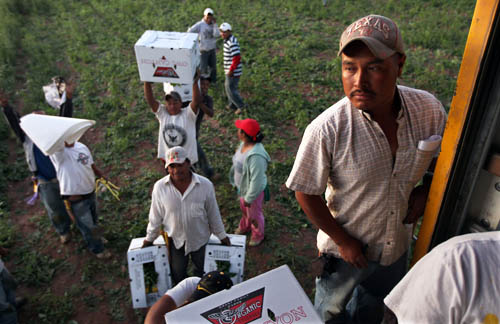 Migrant farm workers from Mexico harvest organic spinach while working at the Grant Family Farms on September 3, 2010, in Wellington, Colo. Owner Andy Grant lamented that the issue of illegal immigration has become politicized nationally. 'They feed America,' he said of immigrant workers. 'They should not be victimized.' Grant said his workers start at $7.25, which is the minimum wage in Colorado.   (Photo by John Moore/Getty Images)

The famous union activist would have turned 84 yesterday

The U.S. media tends to view social movements as the creation of strong leaders, especially on those rare occasions when it looks at unions. Nowhere is this more evident than in its view of Cesar Chavez and the United Farm Workers.

After Chavez died in 1993, a plethora of coverage speculated that the UFW wouldn't survive his death. Stories since have continued in the same personal vein.  Was Chavez a hero or a villain? Did he make terrible mistakes that cost the life of the union he led, or was he single-handedly responsible for its greatest victories?

The questions don't enlighten us because the United Farm Workers was and is the product of a social movement, and Cesar would have been the first to say so. He was not the single author of the boycotts or the strategic ideas the union used in fighting for its survival. No one person could have been, because they evolved as the responses of thousands of people to the age-old problems faced by farm worker unions for a century: strikebreaking, geographic isolation, poverty and grower violence.

The conditions that ignited the burning desire to organize in the 1960a are still out there in the nation's fields. In fact, they've gotten worse. At the height of the union's power in the late 1970s the base farm labor wage was twice the minimum wage. Today that would be $16 an hour - more if the minimum wage had actually risen with inflation.  Today the minimum wage is the wage for most farm workers, and many earn less, law or no.

Growers tore down most labor camps in California in the era of the great strikes. Today thousands of migrant field laborers sleep under trees, in cars, or in the fields themselves as they travel with the harvest. Most workers have toilets and drinking water, and where they know their rights, they don't have to use the short-handled hoe.  But labor contractors, who were once replaced by union hiring halls, have retaken control of the fields.  And as contractors compete to sell the labor of farm workers to the growers, they cut wages even further.

Medical insurance, once guaranteed by UFW contracts, has again become a dream for most workers. In the meantime, the lack of safe working conditions was dramatized by the death in 2009 of Maria Isavel Vasquez, who was denied shade and water and collapsed in 100-degree heat. The low value put on her life and that of workers like her was also dramatized - by the sentence of community service given by the state court to the foremen responsible.  West Coast Farms, the grower, wasn't penalized at all, because it claimed a labor contractor was responsible for conditions in its grape field.

The response that led to the creation of the UFW is still the answer farm workers themselves give to those conditions - to organize, strike and boycott.  The year before Cesar died, five thousand workers struck in the grape fields in Coachella, winning the first wage increase they'd had in a decade.  Every year spontaneous work stoppages like it, although perhaps not on that scale, take place in U.S. fields.

And in the years since the first grape strike in 1965, farm worker unions have grown to over a dozen, in Washington, Oregon, Arizona, Texas, Ohio, Connecticut, Florida, New Mexico and Pennsylvania, in addition to California.  To one degree or another, all draw inspiration from the movement that started in Coachella and Delano.

Chavez was that movement's leader, but not the only one. Others also had a part - women like Dolores Huerta and Jessica Govea, Filipino labor leaders Larry Itliong and Philip Vera Cruz, African American Mack Lyons and many white organizers from the civil rights and student movements of the day.

Of all the achievements of that movement, its most powerful and longest enduring was the boycott.  It leveled the playing field in the fight with the growers over the right to form a union, and led to the most powerful and important alliance between unions and communities in modern labor history.     Farm worker strikes have traditionally been broken by strikebreakers and, all too often, drowned in blood. No country has done more than the U.S. to enshrine the right of employers to break strikes.

From their first picket lines in Delano, UFW members watched in anger as growers brought in crews of strikebreakers to take their jobs. Often the Border Patrol opened the border, as they did during the lemon strike in Yuma in 1974, when trucks hauling strikebreakers roared up through the Sonora desert every night. Local police and sheriffs provided armed protection.

Chavez saw that as akin to the bracero program, which he and other Chicano civil rights activists forced Congress to end in 1964, the year before the grape strike began.  The program allowed growers to bring contract workers to the U.S. under conditions of virtual servitude, and deport them if they struck against it.

Chavez did call for turning in undocumented workers to the Border Patrol, for which he was criticized strongly by union members and other community and labor activists like Bert Corona. But he did this because growers and the Border Patrol colluded to bring in undocumented people as strikebreakers.  Chavez was against strikebreaking, and believed that all workers have the right to organize.

Undocumented workers have always made up most of the members of the UFW, because they make up a majority of the farm labor workforce.  Chavez and the UFW organized all farm workers, people with visas and the undocumented alike.  Many of the union's most active members and leaders have been undocumented, and the union fought to make sure that California's Agricultural Labor Relations Act didn't deny workers their organizing rights based on their immigration status. It fought against immigration raids, especially during strikes and organizing drives.

Non-violence became a basic principle of the UFW because violence in the fields had such a long history.  Armed grower militias killed strikers in Pixley and El Centro in the 30s.  Nagi Daifullah and Juan de la Cruz lost their lives in the grapes in the 1973 strike.  Rufino Contreras was shot as he picketed a lettuce field in the Imperial Valley in 1979.

The boycott couldn't end that violence, but after farm workers crossed the enormous gulf between the fields and the big cities, they didn't have to fight by themselves.  Their reinvention of the boycott provided a breath of new energy for the rest of the union movement, and since then it has become a powerful tool for community-based union organizing.  Today, the idea of alliances between unions and communities is the bedrock of progressive tactics among union activists across the country.  The UFW strikes and boycotts helped develop that strategy, and gave the union its character as a social movement.

The passage of the Agricultural Labor Relations Act in 1975 was a tribute to that strategy's power.  The law, which set up a legal process for farm workers to gain union recognition, was not a gift or a private deal between Cesar Chavez and (the now returned) Governor Jerry Brown.  Even as legislators debated it, the capitol in Sacramento was surrounded by a strike of thousands of tomato pickers. After ten years of class war in fields and supermarkets, growers and legislators decided to recognize (and to try to control) what already existed on the ground.

Farm workers then discovered what other unions have known since the bitter 1950s and the legal evisceration of federal labor rights - the law is a very weak protection.  Although tens of thousands of farm workers voted for the union in hundreds of elections, the ALRA had no teeth to force the negotiation of contracts.  And after accepting huge contributions from agricultural interests, a succession of Republican governors put growers in charge of enforcing it.

Since then, the UFW has sought to cure some of the law's weaknesses by passing other legislation mandating the arbitration of a limited number of first-time contracts. Today a card-check bill for farm workers is also on the agenda in Sacramento, and Jerry Brown may repeat his star performance from 1975 and sign it. But even a better law is no cure-all.

The boycotts had a high price, leaving the union fewer resources to organize activity in the fields. Today the pressure is on the union from workers who are tired of moving backwards. With tens of thousands of new immigrants pouring into the fields of California and Arizona every year, few workers remain who went through the titanic struggles which swept through California and Arizona valleys four decades ago.

If the union doesn't lead and organize that anger, it becomes irrelevant to workers. Survival in any union depends on its ability to organize new members, and the survival question for the UFW is whether it can take their existing need and again transform it into a powerful economic weapon. With limited resources, it confronts hard decisions on where and how this work should be done.

The UFW's present leadership will not have any easier time solving these dilemmas than the union did under Chavez. But if there's inspiration to be drawn from his example, it is that it can be done. The social movement Chavez and the UFW sparked almost half a century ago is still capable of transforming life for farm workers, and in the process, much of the rest of our world as well.

David Bacon was an UFW organizer in the 1970s.