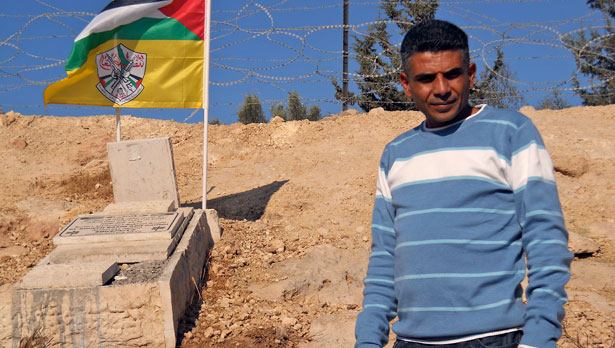 A Bil'in leader next to a Bassem grave. (Photo courtesy Melinda Tuhus)

In Palestine, to Exist Is to Resist

Behind the headlines, Palestinians are using nonviolent direct action to protest the status quo.

Few readers of mainstream media are aware of Palestinians' longstanding creative efforts to use non-violent direct action in their struggle for self-determination.

WEST BANK, PALESTINE – On November 15, Mazin Qumsiyeh and other Palestinian activists boarded public bus number 148, an Israelis-only bus that normally takes Jews from the Israeli West Bank settlement of Ariel to Jerusalem. The bus took the group to the Hizma checkpoint, just outside the northern entrance of Jerusalem, where activists resisted authorities’ efforts to remove them. Eventually, as a camera broadcast the action online, eight people were pulled from the bus and arrested. They were charged with “illegal entry to Jerusalem” and “obstructing police business.”

Qumsiyeh hopes this recent “freedom ride” – possible because a bus driver let them ride by mistake, he said – will spark the same kind of response that its namesake did across the United States in the early 1960s, when interstate bus trips helped end racial segregation in the South. Qumsiyeh, author of Popular Resistance in Palestine: A History of Hope and Empowerment, says other examples of nonviolent resistance include protests of the separation barrier (which many Palestinians call an “apartheid wall”) that has effectively turned 10 percent of Palestinian land into Israeli land since its construction began in 2002; school girls holding class in the street when they can’t get to their schools because of Israeli interference; and farmers braving Israeli intimidation to harvest olives. “For us to exist on this land is to resist,” says Qumsiyeh, who teaches at Bethlehem and Birzeit universities.

Most readers of mainstream media in the United States think of the First Intifada (1987-92) as the stone-throwing uprising and the Second Intifada (2000-2004) as the attack of the suicide bombers. They may have heard of the Boycott, Divestment and Sanctions movement, started in 2005 by more than 170 Palestinian civil society groups. (The movement aims to curtail benefits accruing to businesses that benefit from the occupation.)But few are aware of Palestinians’ longstanding creative efforts to use nonviolent direct action in their struggle for self-determination. Those efforts, from the tax revolt in Beit Sahour during the First Intifada to creative actions led by Palestinians like Qumsiyeh, are often supported by both international and Israeli activists. And they are proliferating.

Ghassan Andoni, cofounder of the International Solidarity Movement (ISM) and a leader of the Palestinian Center for Rapprochement between People, says nonviolent direct action by Palestinians opposed to the Israeli occupation started before the First Intifada. “Activities included throwing military identity cards issued by the occupation as a way to tell the occupier that we don’t recognize your authority and there is no contract between us,” Andoni said in an interview in Bethlehem in mid-November. “Then we stopped paying taxes and submitting monthly reports saying, ‘No taxation without representation.’”

The First Intifada also saw the creation of autonomous communities all over the West Bank. “We established our own economy to detach from the occupation,” Andoni explained. Large protest marches and solidarity campaigns were also organized with international activists and Israelis. ISM has staged “die-ins” in front of Israeli tanks, and its members have chained themselves to homes the Israeli government wants to demolish, and obstructed the Israeli army from imposing a curfew. As popular resistance among Palestinians has spread, Andoni increasingly sees ISM’s role as supporting local nonviolent initiatives.

Bil’in, a village near Ramallah, is one such initiative. Residents of Bil’in have mobilized against Israel’s West Bank security barrier. Since construction of the fence began there in 2005, villagers have staged various events. After the release of the film Avatar, with its story line of the occupation of Pandora and the rape of its resources, Palestinians painted themselves blue to look like Pandorans. On another occasion, they lugged a television to the fence and cheered their favorite teams during a World Cup tournament to show that normal life would go on.

Bil’in activists photograph and videotape every protest. “The camera is our gun,” says Iyad Burnat, who heads the resistance committee in the village. In 2011 the barrier was moved a short distance away from its initial location in Bil’in, on orders from the Israeli High Court. But much of the village remains on the Israeli side of the fence, and protests continue.

What is the ultimate goal of nonviolent action, beyond stopping the security wall and ending the occupation? “One state or two states?” is not the right question to start with, Qumsiyeh says. “The right question to ask is, ‘What is the right thing to do that will guarantee the safety and security and peace and humanity of everybody in the long run?’ Once we can agree, we’ll work toward that.”