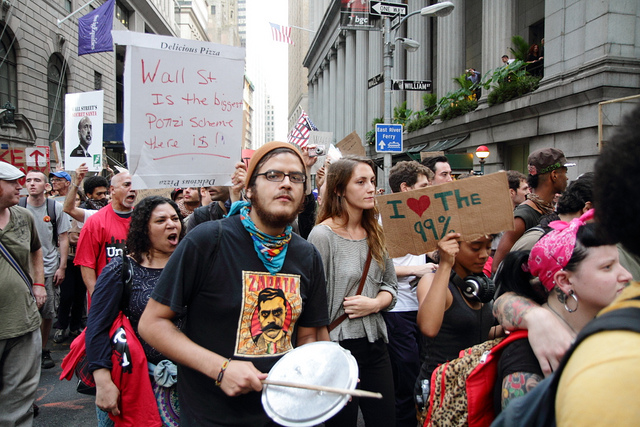 How the Government Targeted Occupy

A new report reveals the U.S. spent millions spying on Occupiers and other anti-corporate activists.

Little evidence has emerged, in the years since the horrific violence of 9/11, of any widespread threat from al-Qaeda within the United States. Nevertheless, politicians have used that potent memory to fund an enormous domestic surveillance infrastructure.

Freedom of conscience is one of the most fundamental human freedoms. This freedom is not merely about one’s ability to choose to believe or not believe in a particular religion or philosophy. In a democracy, freedom of conscience is about the ability to be critical of government and corporations, and to be free from the chilling fear that doing so will subject you to government surveillance.

Freedom of conscience cannot be fully realized in isolation. It requires the ability to share one’s thoughts, to speak out about injustice and to join with others in peaceable assemblies to petition for redress of grievances. Americans should be able to exercise these most sacred rights in a free society without fear of being monitored by the government.

A new report from the Center for Media and Democracy (of which I am executive director), “Dissent or Terror: How the Nation’s Counter Terrorism Apparatus, in Partnership with Corporate America, Turned on Occupy Wall Street,” written by CMD contributor and DBA Press publisher Beau Hodai, details several ways in which U.S. tax dollars are being squandered on law enforcement—or so-called “homeland security” forces—monitoring Americans who voice dissent against the extraordinary influence that some of the world’s most powerful corporations have on our elected officials. This investigation documented:

Even if the amount of money being wasted were small (and it’s not—we’re talking millions of dollars heaped into the coffers of local law enforcement agencies annually), the notion that we the people should tolerate the deployment of police, ostensibly hired to protect us, to spy on us without any criminal predicate is an outrage. The money spent spying on Americans could be spent strengthening our public schools, providing access to life-saving medicine for our neighbors or helping to achieve the Constitution’s promise of forming “a more perfect union.”

In the years since the horrific violence of 9/11, little evidence has emerged of any widespread threat from al-Qaeda within the United States. Nevertheless, politicians have used that potent memory to fund an enormous domestic surveillance infrastructure. The result of this trough of money and excess capacity was utterly predictable: the turning of “counterterrorism” resources against law-abiding American citizens.

A history of covert surveillance

It has been more than 30 years since Congress acted with deep skepticism regarding government agents deployed to spy on Americans. The last thorough and truly independent investigation of such covert activities was after Watergate, when the Church and Pike Committees spent months intensively investigating the ways in which prior administrations had violated Americans’ privacy and trampled civil liberties under the guise of national security. The outcome was the 1976 “Levi Guidelines,” promulgated by then-Attorney General Edward Levi to prevent the kind of domestic surveillance abuses, such as COINTELPRO, that had been perpetrated by J. Edgar Hoover’s FBI.

Since the Carter administration, however, protections from domestic surveillance have eroded steadily. The Levi Guidelines were largely countermanded through revisions by John Ashcroft and his successors at the Justice Department. With the post-9/11 shift from enforcing the law to “gathering intelligence,” both public rules and secret guidelines were altered to maximize the harvesting of information about Americans without any requirement for probable cause. The new rule appears to be that almost everything except for home searches and phone taps is fair game. And even the rules for electronic surveillance are now subject to enormous loopholes due to changes pushed into law in 2008 by Director of National Intelligence-turned-Booz Allen Hamilton Vice Chairman Mike McConnell—with help from AT&T, Verizon and others.

It was a stroke of misfortune that, on 9/11, Vice President Dick Cheney served as the de facto head of the national security hierarchy. Cheney’s “dark side” approach created a climate in which longstanding rules intended to protect basic rights were replaced with an array of questionable, if not absurd, interpretations of domestic and international law.

Cheney’s push for unfettered surveillance powers goes back to his time as a staffer for President Ford in the 1970s, when he and Deputy Attorney General Laurence H. Silberman tried to thwart essential reforms of surveillance agencies. In another case of ill fate, Silberman sat on the Foreign Intelligence Surveillance Court when George W. Bush took office and helped facilitate legal opinions instrumental to the Bush administration’s expansion of domestic surveillance activities by redefining Americans’ Fourth Amendment rights.

Unfortunately, much of this backsliding has been embraced and further entrenched by the Obama administration.

Generally, the federal government claims to abide by a long-standing rule that a person will not be investigated based “solely” on protected First Amendment activity. But what does that amount to in reality? In Arizona, it appears fusion center personnel used the prospect of anarchist involvement in protests of banks, corporations and ALEC as a pretext for dispatching at least one undercover officer to infiltrate groups of Americans organizing peaceful demonstrations. Fusion center personnel even cited past instances of “violent tactics” perpetrated against ALEC in other states, when, in reality, there had been only one incident of graffiti at an ALEC protest.

Quite frankly, there is no way to know if U.S. anarchist groups have been infiltrated by law enforcement or by intelligence agents acting as agent provocateurs. It is worth noting that, in the case of the Phoenix infiltration, the undercover officer apparently said he was affiliated with a Mexican anarchist group that claimed to have committed acts of arson.

If the prospect of graffiti can trigger months of infiltration and surreptitious surveillance, then the idea that our government will not monitor citizens solely for exercising their First Amendment rights becomes little more than a joke. And that joke is on us.

Read the full report on SourceWatch.

Lisa Graves is the Co-Director of Documented. She previously served as the Chief Counsel for Nominations for the U.S. Senate Judiciary Committee. She was also Deputy Assistant Attorney General in the Office of Policy Development at the U.S. Department of Justice, where she vetted potential judicial nominees. She previously led the Center for Media and Democracy (CMD) where she spearheaded the launch of ALEC Exposed. She is an Advisor to UnKoch My Campus and on the Board of Directors of CMD.