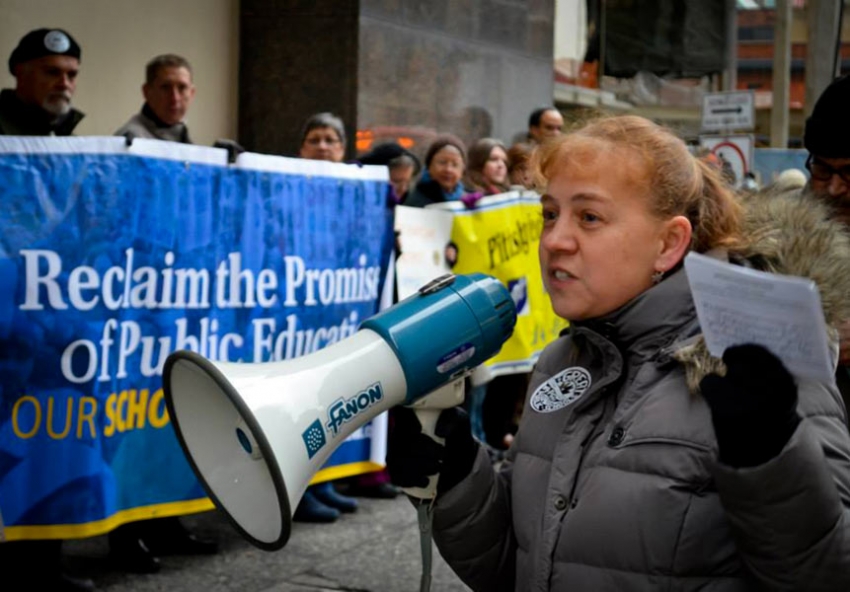 Jessie Ramey speaks to a crowd on the National Day of Action to Reclaim the Promise of Public Education on Dec. 9, 2013.

An embattled public school system fights back against privatization.

Critics argue that TFA's untested teachers and the rapid turnover are unfair to students, and that the program is a stopgap, at best, for the problem of chronically underfunded and understaffed public schools.

Advocates for public education scored a major victory in December, when the newly constituted Pittsburgh Board of Education rejected a three-year, $750,000 contract between Teach for America (TFA) and Pittsburgh Public Schools. TFA assigns recent college graduates to teaching positions in public schools, often urban schools that are considered failing. Critics believe the program does a disservice to children and undermines the foundations of public education.

The victory is part of a broad and bitter struggle that has escalated dramatically in Pennsylvania since Tom Corbett was elected the state’s governor in 2010. A Republican in the Tea Party mold, Corbett made “education reform”—code for defunding public schools and shifting students to charter and private schools—central to his campaign. Once elected, he pushed through a 2011 budget with an estimated $1 billion in cuts to funding for the state’s public schools. The advocacy group Pennsylvania School Funding Campaign described the cuts as “an outrageous assault on children, families and Pennsylvania’s economic future.” One thing that both sides can agree on is the dire condition of Philadelphia’s public schools, which are “facing end times,” as Salon’s Aaron Kase recently wrote, noting that some are doing without “counselors, administrative staff, noon aides, nurses, librarians or even pens and paper.”

In early 2013, a crucial opportunity arose to advance the anti-privatization movement in Pittsburgh: Four of the nine Board of Education members announced their retirement. Unlike cities such as Chicago and New York, which have mayor-appointed school boards, the Pittsburgh board is elected by residents. So several labor, interfaith and social justice groups came together to promote candidates who support education justice and to host public forums to help educate the public about the candidates. That coalition subsequently formed Great Public Schools Pittsburgh (GPSP). Throughout the months leading up to the general election, GPSP met with the candidates to share concerns about the trend toward privatization.

The most dramatic fruit of their labor has been the end of the TFA contract. The lame-duck board had approved the contract by a 6-3 vote, but the new board voted 6-2 (with one abstention) to cancel it.

TFA has come under increasing scrutiny over the past several years. Its recruits commit to two-year stints and are placed in schools after just five weeks of training. Critics argue that the untested teachers and the rapid turnover are unfair to students, and that the program is a stopgap, at best, for the problem of chronically underfunded and understaffed public schools.

“We should be making schools welcoming, wonderful environments where both students and teachers want to be every day. Bringing in new people and contributing to constant churn within the school is not the way to do it,” says Jessie Ramey, a founding member of GPSP and the mother of two children in Pittsburgh public schools.

In addition to its efforts to elect friendly Board of Education members, GPSP has organized rallies to protest privatization measures and school closings; invited former U.S. Assistant Secretary of Education Diane Ravitch to speak about her recent book, Reign of Error, which analyzes “the hoax of the privatization movement”; and conducted a bus tour through several neighborhoods where the city has closed public schools. “These things have allowed us to shine a spotlight on what’s going on,” Ramey says.

GPSP also got a supportive mayor in the November elections. Democrat Bill Peduto campaigned on the theme of investing in the city’s neglected urban neighborhoods, and the public schools are central to his plans. Over the past year, Ramey worked with one of Peduto’s advisors to craft his education policy.

In 2014, GPSP’s priority is to push forward positive alternatives to privatizing education, such as community- based public schools. For Ramey, that means “making each of our schools the hub of its community, and bringing resources into each school based on what it needs. The community model is less of a model and more of a mindset. People believe that, by investing in schools, they’re investing in their community. They’re throwing their arms around each school and saying, ‘We’re not going to let it close. We’re going to get everything in this building that we need.’ ”

Ramey has been an influential voice in Pittsburgh’s education debates since 2011, when she founded the blog Yinzercation (a play on “Yinzer,” slang for a native of southwestern Pennsylvania) in response to the state budget cuts. She says the recent victories are exciting, but long-term success is still uncertain, and sustaining a coalition can be a struggle.

“It’s really hard,” she said of GPSP’s process. “Each member has its comfort level with different kinds and styles of actions. But the group has been very willing to say, ‘Okay, let’s learn from each other.’ We know that the only way we’re going to win is to work together.”