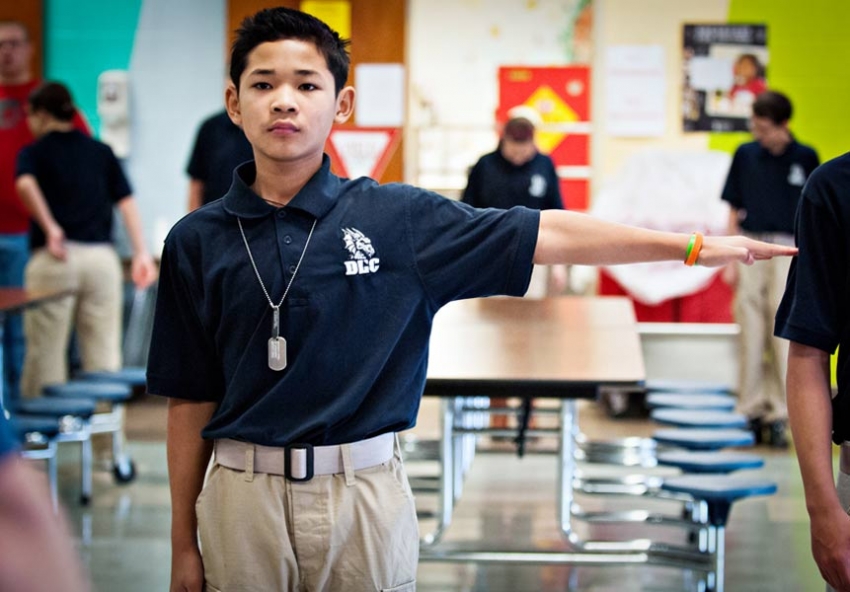 August Say, 12, holds out his arm to determine where he should stand in class in the new Dragon Leadership Corps at his middle school in Bowling Green, Ohio.

A review of programs in more than a dozen states found that there are at least 97 public middle schools currently offering military-style education.

Last year, Henry F. Moss Middle School in Bowling Green, Ohio, offered students a brand new course. And, as a headline in the local newspaper proclaimed, this was “not your traditional class.” For starters, the teacher—an army sergeant—had told the Bowling Green Daily News that one of his goals was to expose these seventh- and eighth-graders to “military values” that they could use as “building blocks” in life. To that end, students in the class earn military style ranks, engage in army-style “PT” (physical training) and each Wednesday, wear camouflage pants and boots.

This is the Moss Middle School Leadership Corps, part of the growing trend of military-style education for pre-adolescents.

Middle school military programs are younger cousins of the Junior Reserve Officers’ Training Corps (JROTC), a Pentagon program taught by retired military officers and present in more than 3,500 high schools nationwide. Although there are strong similarities with JROTC— military-style uniforms, close-order drills, a curriculum that emphasizes patriotism and military history—the key difference is that JROTC is supported by federal funds and middle school military programs are not, by federal law. That means the continued existence of the middle school programs depends on state or district funding and, in some cases, charitable contributions.

Although the localized nature of the programs and the variety of names they go by—most commonly “leadership corps” or “cadet corps”—make them difficult to quantify, a review of programs by In These Times in more than a dozen states found that there are at least 97 public middle schools currently offering military-style education.

A driving force is the Fort Worth, Texas-based National Middle School Cadet Corps (NMSCC), a nonprofit that supplies curriculum and support to more than 50 middle school military programs nationwide. In a 2013 presentation to Fort Worth school officials, Jeremiah Marshall, COO of NMSCC, displayed a U.S. map with dozens of strategically affixed red dots. “Our goal and vision is to get a program everywhere that you see one of those red dots,” he said.

Though such programs date back to the 1990s—beginning in Tulsa, Oklahoma—it was only after a tremendous expansion of the programs in the 2000s that mounting concerns about middle school militarism led to the first known cases of organized resistance. In February 2004, at the height of grassroots opposition to the Iraq War, Los Angeles-area activists convened a workshop titled “Stopping Militarism in Our Schools” that included extended discussion of middle school military programs. More significant and sustained organizing has arisen in Louisville, Kentucky, where a local chapter of the Fellowship of Reconciliation (FOR)—a century-old organization devoted to promoting social justice issues—has been at the forefront of a campaign to block the militarization of a local middle school.

Activist Chris Harmer, a member of Louisville FOR’s steering committee, and his colleagues leapt into action in December 2012, when the county school board expressed interest in establishing a “cadet academy” magnet school at Myers Middle School. To support their case, county school board members presented an analysis of 900 high-school students by the school district’s office of data management. Their report concluded that JROTC students had better academic outcomes, fewer discipline problems and higher attendance than their non-JROTC peers.

Knowing that the district would respect hard data more than activists’ opinions, Harmer and his colleagues invited Jason Gainous, a political science professor at the University of Louisville, to scrutinize the school district’s study. At a school board meeting in December 2013, Gainous unveiled his conclusion: There was no statistically significant difference between JROTC and non-JROTC students. Harmer says Gainous’s study is “very embarrassing to the school administration, which says it is committed to evidence-based decision-making.”

One of the most frequently touted claims by proponents of middle school military training is that the discipline improves academic and behavioral performance. However, in what appears to be the only empirical study of this topic, a University of Houston graduate student found that middle school military programs in three Texas school districts may lead to improved student attendance, but have no discernible impact on reading and math scores. Critics, seizing on this lack of hard data, suggest that the most likely effect of these programs is to encourage youth to embrace the military as a career path.

So are such programs simply promoting military careers to young children? In response to this question, Colonel Larry Morden, executive officer of the California Cadet Corps, a National Guard program with a presence in approximately 30 middle schools, was emphatic: “The number one goal is to provide [the] cadet with leadership training,” he wrote in an email to In These Times. “We do NOT stress a military career.”

However, some programs, like the one at Moss Middle School, are explicitly designed to prepare students for high school JROTC, which (according to the military’s own surveys) sends about 40 percent of its graduates into the military.

Today, that pattern appears to hold. For example, the military program is currently present in eight of the 10 middle schools in Compton, one of the state’s poorest cities, where Latinos make up two-thirds of the population. At Myers Middle School in Louisville, 69 percent of students are minorities and more than 80 percent qualify for free or reduced-price school lunches.

Critics argue that equality of educational opportunity is undermined when schools over-expose African-American and Latino students at such a young age to the armed services. Military training programs can chew up a large portion of the school budget, leaving little room for academic enrichment like music or after-school programs—or even more basic fare, like college prep classes. According to a 2006 report by UCLA’s Institute for Democracy, Education and Access, 73 percent of Los Angeles County high schools that offer JROTC “do not offer enough college preparatory courses for all students to take a college preparatory curriculum.” In Chris Harmer’s words: “Poor and minority kids are being tracked into military careers as early as sixth grade. That’s what’s so insidious about this.”

Last September, the Fellowship of Reconciliation joined a coalition of nearly 60 non-governmental organizations, academic researchers and others to launch the campaign A National Call: Save Civilian Education. Their goal: to resist further incursions from the military and to push other progressive organizations to make the issue a priority.

At the same time, the campaign against militarization has led Louisville FOR—which is made up, Harmer says wryly, of “middle-aged white lefties”— to look at broader issues of race and class injustice. The group has joined a coalition focusing on another problem in Louisville schools—racial disparities in student achievement.

“We need to continually put our anti-militarism work into the larger context,” he wrote in an email to In These Times. What he and other activists have called the “school-to-military pipeline” is an issue deeply connected with anti-poverty and anti-racism work. Simply put, Harmer added, “The work is an integral piece of a broader movement toward a more just society.”