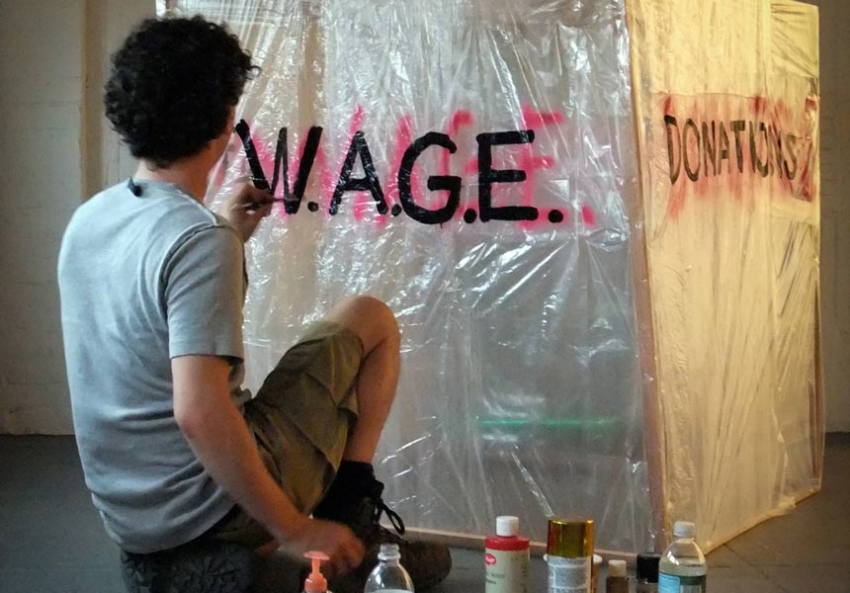 Organizing artists can be like herding cats. That hasn’t stopped WAGE from fighting for fair pay for art.

New York’s Metropolitan Museum of Art, for instance, has a total annual operating budget of more than $250 million but paid surveyed artists for only 14.3 percent of exhibitions.

“I’m a veteran of scores of museum shows around the country and haven’t received payment from a museum … since 1987. In fact, most of the museums who’ve acquired my work in the past 25 years have demanded it be donated for free or [less than] the cost of materials.”

This story comes from an anonymous survey of nearly 1,000 artists about the compensation they received for exhibitions and performances at nonprofit arts institutions (chosen on the basis that for-profits very rarely pay for exhibiting work). Of the shows artists listed, 58.4 percent were completely unpaid, without even expense reimbursement. Even some of the largest institutions got low marks: New York’s Metropolitan Museum of Art, for instance, has a total annual operating budget of more than $250 million but paid surveyed artists for only 14.3 percent of exhibitions.

These results were no surprise to the group that conducted the 2011 survey: the New York-based Working Artists and the Greater Economy (WAGE). Artists formed WAGE in 2008 over shared frustrations with non-payment. Core organizer Lise Soskolne says provision of free labor in return for exposure “was the primary mode of exchange between the people that founded WAGE and the institutions that they had been working with.” While many workers struggle for fair pay, Soskolne says, “We’re trying to convince people that artists should get paid, period.”

The initial group of about seven members, including such New York artists as K8 Hardy and A.K. Burns, turned first to consciousness-raising and researching precedents. They found particular inspiration in the Art Workers’ Coalition, a New York group active between 1969 and 1971 that mobilized around issues such as the need for dialogue between museums and artists; underrepresentation of marginalized groups in the arts; and the Vietnam War. But WAGE members felt the Coalition’s mission was too diffuse and decided to pare down their focus to a single goal: payment for artists.

WAGE laid out its philosophical moorings in a “wo/manifesto” that condemns the “organized irresponsibility of the art market and its supporting institutions, and demands an end of the refusal to pay fees.” It notes the inequity of “an unpaid labor force within a robust art market from which others profit greatly.”

Besides attacking the structures that promote inequity, WAGE also addresses artists’ self-perception: Soskolne writes in her essay “On Merit” that one of the reasons nonprofits do not pay fees is because “artists don’t think they deserve them,” due to concerns that “the radical social or political potential of art is compromised by its commodity or market status.” While acknowledging that the issue is complex, she maintains that when artists function as workers, they should be compensated as such.

The fraught psychology of art as labor was among the factors that discouraged the group from starting with a traditional collective bargaining model. “It’s very difficult to build solidarity among artists,” Soskolne tells In These Times. “We tend to be highly individuated and competitive with one another, which is not surprising when you consider that the construction of value in the art field is based on the success of a few at the expense of the many.” She adds that the time commitment organizing requires is difficult to ask of artists, many of whom also work full-time jobs.

Instead, the members of WAGE decided to target institutions that ostensibly exist to support artists, primarily focusing on nonprofit, visual arts organizations. Three years of planning, research and public discussion went into developing a nonprofit certification program—launched in October 2014—to establish guaranteed minimum fees for artists.

The program hasn’t needed a dedicated recruiting drive: Word-of-mouth, press and social media have drawn in a steady flow of applications for certification, at times challenging WAGE’s ability to process them. So far, WAGE has certified 24 nonprofits in cities around the country. Soskolne explains the program’s success by noting that WAGE certification has become a “reputational badge of honor” for organizations committed to supporting artists.

At the core of the program is a fee calculator based on an organization’s operating budget and the nature of the artist’s participation—exhibition, lecture or screening —as well as the number of people participating, whether the work is commissioned or existing, etc. For a solo exhibition at an institution with annual expenses of less than $500,000, the minimum fee is $1,000. That fee scales up to $10,000 when operating expenses top $5 million. WAGE board member Andrea Fraser notes that the goal is “not only to certify organizations, [but to] educate artists to feel entitled to compensation.”

Artists are already benefiting from the program. New York artist Noah Fischer received $450 for exhibiting in a group show at a WAGE-certified nonprofit in Houston. While he acknowledges that he “didn’t make a lot of money,” he maintains that not losing money is a significant improvement over working for exposure and “much more sustainable.”

While WAGE’s approach to artists’ fees is novel, the Canadian Artists’ Representation/Le Front des Artistes Canadiens (CARFAC) provided a useful template. Founded in 1968, CARFAC also centered its early work around a fee schedule. Though adopting the schedule was voluntary, members of CARFAC applied pressure with a 1971 artists’ boycott of institutions that were not abiding by its requirements. Thanks to CARFAC’s continued lobbying and organizing, Canada now requires artists’ fees for all noncommercial shows. Those fees must meet CARFAC’s minimums for institutions to receive federal art grants.

WAGE and CARFAC are now working together to advance legislation guaranteeing royalties to artists for works resold. While dozens of countries have such laws, and California has a resale statute that applies to intrastate commerce, the United States and Canada lack such provisions at the federal level. A pending Senate bill, sponsored by Wisconsin Sen. Tammy Baldwin, would enshrine the right in federal law, but WAGE and CARFAC are concerned the bill has too many restrictions (including a limited scope that only addresses works sold at auction).

WAGE’s primary focus, however, remains its certification program. WAGE is now developing a version such that “WAGE-certified artists will commit to only engaging their labor if they get paid according to WAGE’s standards,” Soskolne says, so that institutions “would be under pressure … whether they’re certified or not.” Artist and filmmaker Elizabeth Orr plans to join the program when it launches.

“While I could just use the fee calculator on the WAGE website,” she says, “there’s something [exciting] about standing your ground and asking for exactly what you want.”