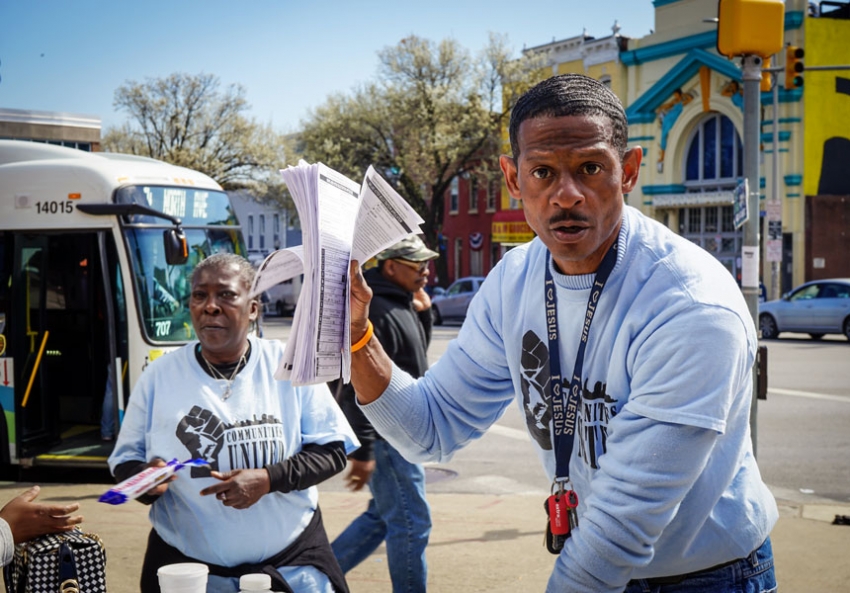 How an Ex-Felon Voting Bloc Could Shape Baltimore’s Election

Today, restoring voting rights to ex-felons who served their sentence "without a problem” has the support of about 65 percent of likely voters, and at least 23 states have eased restrictions since 1997. But disenfranchisement remains prevalent, and reforms are hard-won.

Yo! You on the sidewalk! You getting off the bus! Come register to vote!”

On a warm afternoon in March, five organizers in light blue shirts cluster around a folding table at an intersection in West Baltimore. Perry Hopkins, the group’s leader, exhibits nonstop energy—chatting, hugging, teasing, dancing and shouting greetings. Posters behind the table announce: “THE NEW LAW IS IN EFFECT. ALL EX-OFFENDERS CAN VOTE. REGISTER TODAY!!!”

Hopkins, who spent a total of 19 years in prison for nonviolent crimes, is a field organizer for Communities United, a grassroots organization in Maryland that helped get ex-felon voting legislation through the General Assembly last year. On March 10, more than 44,000 Maryland residents—20,000 in Baltimore alone—became eligible to register before the April primaries.

Hopkins, 55, has never voted himself. He regained his never-used right to vote after completing parole in 2015.

It hurt him to watch from the sidelines as history unfolded in 2008. “It was eight minutes after 10,” he recalls. “Everybody in the hood was running up and down the streets yelling, ‘We got a black president!” An acquaintance chided him, “You can’t get no credit for this!”

But after helping change the law for tens of thousands, Hopkins says he finally has “my hand in helping to make history in Maryland.” What’s more, “The first woman president could be elected.”

At the registration booth, placed strategically on the busy corner of Pennsylvania and North Avenues, some passersby approach immediately; others seem surprised to be called over and laugh nervously. One man pushing a stroller stops and calls out, “Hey, you think I can vote? I got over 40 arrests!” He promises to return.

After one man leaves the table, Hopkins reminds his coworkers, “When people come up and say, ‘I don’t have my glasses,’ that means they can’t read.”

South of the intersection is Sandtown-Winchester, a blighted neighborhood with Maryland’s highest incarceration rate. Just two blocks away is where police began their ultimately fatal pursuit of Freddie Gray in April 2015.

Hopkins points across the street. “That’s one of the most dangerous corners in Baltimore. You’ve probably got eight different groups dealing there.” The day before, he says, a group of men crossed one by one and registered.

These are demographics Communities United hopes to reach, and so far, it seems to be doing so. The group registered 887 new voters in the first 20 days of ex-felon eligibility, 403 of whom were ex-offenders.

Maryland is the 16th state to allow ex-felons to vote before completing parole and probation; only Maine and Vermont allow voting during incarceration. In the other 34, people under community supervision are expected to work, pay taxes and follow the law, yet cannot vote. Three states—Florida, Iowa and Kentucky—disenfranchise former felons for the rest of their lives.

Black Americans are disproportionately policed, arrested and convicted of felonies, and current or former incarceration keeps one in 13 black adults from the polls, four times the rate of non-black disenfranchisement.

This racial disenfranchisement is no coincidence. Although colonists brought the concept of felon disenfranchisement from Europe, the strictest state laws were passed in the Jim Crow era, alongside poll taxes and literacy tests, according to criminal justice advocacy group the Sentencing Project. Lawmakers were explicit: One early 20th-century Virginia delegate promised, “This plan will eliminate the darkey as a political factor in this state in less than five years.”

Today, restoring voting rights to ex-felons who served their sentence “without a problem” has the support of about 65 percent of likely voters, and at least 23 states have eased restrictions since 1997. But disenfranchisement remains prevalent, and reforms are hard-won.

The Maryland push for reform came from the statewide Unlock the Vote Coalition, which was coordinated by Communities United and includes ex-offender group Out for Justice, SEIU, the Maryland chapters of the League of Women Voters, NAACP and ACLU, and the Brennan Center for Justice, among others. Even the American Probation and Parole Association wrote a letter of support.

The Coalition helped get legislation sponsored by Del. Cory McCray, an ex-offender himself, through Maryland’s General Assembly, only to see it vetoed by Gov. Larry Hogan in May 2015.

After that, we “became like pit bulls,” says Hopkins. “We refused to take no on the say-so of one person, when the General Assembly clearly, to a very large majority, knew this was the right thing to do.” The coalition brought in ex-felons to testify, meet one-on-one with legislators and speak to the press.

In January and February, the House and Senate overrode Hogan’s veto by the minimum number of votes.

“We had about an afternoon to celebrate, and then had to get back to work,” says Jane Henderson, executive director of Communities United. “Our hope is to at least see hundreds, if not thousands, of newly enfranchised voters.”

Henderson believes that the simplicity of the new law—you’re out, you can vote—could also help re-engage tens of thousands more who served out their parole or probation and were already eligible, but avoided the voting booths out of confusion or fear.

If enough new voters register and turn out, there could be real political consequences. Municipal council seats in some Maryland cities are won by just tens of votes, and the Baltimore mayoral race, with its 13 Democratic contenders, may be a close one.

Hopkins is organizing an ex-offender voting bloc to demand rent subsidies, job quotas and inclusion in building projects, and is hosting a forum April 13 for candidates.

“We can swing this election; we can take it,” he says. “We’re going to show up like chicken day in the chow hall!”

One of Community United’s volunteers, Deanna Curtis, 32, is another new voter. Still serving parole after completing a year of incarceration, Curtis says she’s not sure when—if ever—she would have been able to vote without the new law. When the bill passed, she says, “I was surprised, because I feel like they’re always trying to hold us back.”

Curtis hopes ex-offenders will turn out in high numbers and make their voices heard. “We can express what we need … jobs, houses, better schools,” she says. “Maybe we can get the city to move forward.”

Hopkins thinks the timing is right for a power shift: “Freddie Gray’s death was the lightbulb that exposed the culture of negativity, the culture of intolerance, the callousness of the agencies and the administration toward the community.

“We have paid into this system for years and gotten nothing out of it,” Hopkins adds. “This is going to empower a community, much like the gay and lesbian movement. It’s time. It’s time that we are recognized and our issues are addressed as well.”