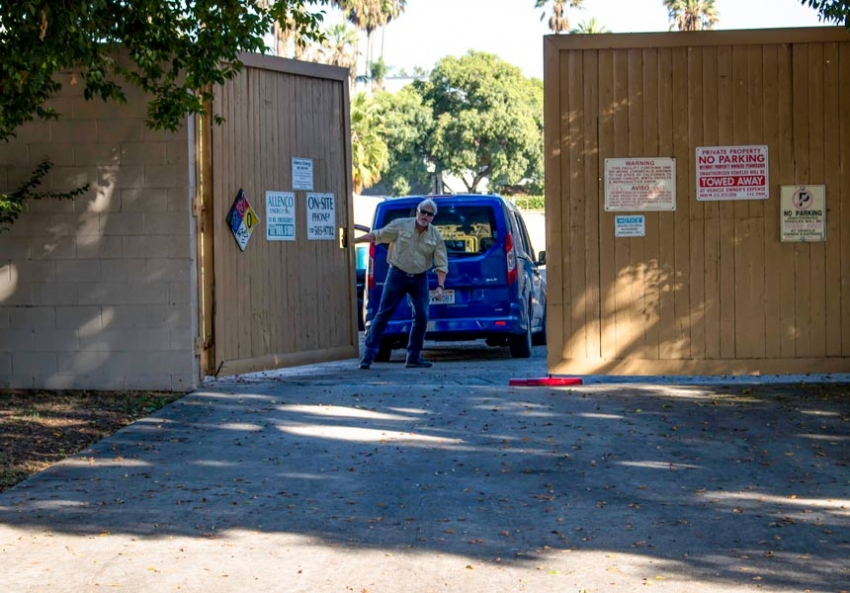 An Allenco employee closes the entrance to an oil field on land owned by the Archdiocese of Los Angeles. (Charles Davis)

The Pope May Speak About Climate Justice, But in L.A., the Church Leases Land to an Oil Company

Allenco is working to clear a few last regulatory hurdles and reopen the site for drilling. Local residents are calling on the archdiocese to keep the site closed.

LOS ANGELES—Most people don’t even know they’re there, hidden behind a 10-foot wall in the middle of one of the most densely populated neighborhoods in Los Angeles: 21 oil wells with the capacity to pump out more than 58 barrels a day.

The oil field is located in University Park, a low-income, multiracial neighborhood in which Latinos make up nearly 50 percent of the population. The land is owned by the Archdiocese of Los Angeles. The company operating the wells, Allenco, voluntarily shut them down amid criticism and health concerns in 2013. On a recent Friday afternoon, only one employee could be seen milling about the site.

But now, Allenco is working to clear a few last regulatory hurdles and reopen the site for drilling. Local residents are calling on the archdiocese to keep the site closed.

Art Gomez, standing a block away in the driveway of his elderly mother’s home, remembers when the wells were active. “There was a foul smell,” he says, scrunching his nose.

In 2013, after years of complaints from locals, inspectors from the Environmental Protection Agency decided to check for themselves. It sickened them.

“I’ve been to oil and gas production facilities through the region, but I’ve never had an experience like that,” said Jaren Blumenfeld, then EPA regional administrator for the Pacific Southwest, as reported in the Los Angeles Times. “We suffered sore throats, coughing and severe headaches that lingered for hours.”

Soon after, Allenco closed the site voluntarily under pressure from Sen. Barbara Boxer (D) and others, and Allenco was hit with a lawsuit from Los Angeles City Attorney Mike Feur, accusing the company of ignoring air quality regulations. Regulators found that the odor created a “public nuisance,” and that equipment was releasing smog-forming compounds.

The company settled that lawsuit in 2016, agreeing to pay out $1.25 million in civil penalties. As part of the settlement, it must come into compliance with environmental regulations. Once it does so, it can open again.

Holding her daughter’s hand just outside the oil field, Tania Velásquez says she moved to the neighborhood just six months ago. She’s heard about what it used to be like here, and worries that if the site reopens, “It’s going to be bad for my child.” STAND-L.A., a coalition of community groups opposed to urban oil drilling, is campaigning to keep the site closed. It wants Allenco’s landlord, the Catholic Church, to stop allowing fossil fuels to be extracted.

“You’ve got a tenant [Allenco] on this property that’s a known lawbreaker,” says organizer Eric Romann, “and you’ve got an activity that’s known to cause harm to the surrounding community.” The archdiocese, he says, “should terminate the lease … and make sure the site never reopens.” Residents rallied in front of the archidoces’s office October 4.

Shortly after Pope Francis released his 2015 encyclical on climate change, which declared “technology based on the use of highly polluting fossil fuels … needs to be progressively replaced without delay,” University Park residents sent him a video pleading their case.

Some Catholic institutions seem to have taken the encyclical to heart: In early October, more than 40 Catholic organizations, representing investors worth $5.5 trillion, announced they were divesting from any companies that extract gas, oil or coal.

But the church has not acted in Los Angeles. In addition to the Allenco site, the archdiocese leases to Freeport McMoran Inc., which operates 22 oil wells, prompting similar complaints of toxic odors and demands that it be shut down.

In a statement to In These Times, the archdiocese says it is “working with the mayor’s office, the Petroleum Administrator for the City of Los Angeles and Allenco to explore possible alternative uses for the site in our continued commitment to the health and well-being of the entire community.” It declined to elaborate as to what those alternatives were.

Ultimately, local campaigners want the city to ban urban oil drilling altogether. According to a 2015 report from the Liberty Hill Foundation, a local social justice nonprofit, “Los Angeles is the largest urban oil field in the country,” with nearly 5,200 active wells, 70 percent of which are within 1,500 feet of a home, school or hospital.

In the meantime, advocates want the archdiocese to accept responsibility for extending the life of an industry that the head of their church has labeled a threat to the planet.

As Pope Francis once posted on Twitter, “The earth, our home, is beginning to look more and more like an immense pile of filth.” For now, at least, his church is still playing a role.

Charles Davis is a journalist published by outlets such as Al Jazeera, The Intercept, The Nation and The New Republic. Follow him on Twitter: @charliearchy.