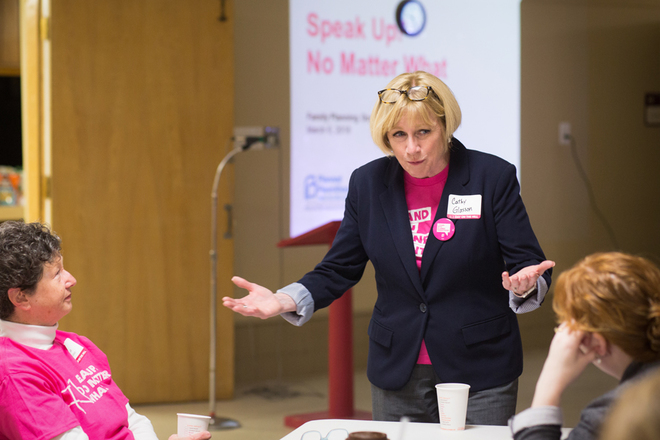 Cathy Glasson, a nurse running for Iowa governor, chats with attendees of a Planned Parenthood training in Des Moines on march 6. (Eva Lewin)

Cathy Glasson is running an insurgent campaign on a platform of Medicare for all, a $15 minimum wage and ending “right to work” laws.

DES MOINES, IOWA—Hugh Espey, executive director of Iowa Citizens for Community Improvement (CCI), is wearing gray sweats and a hoodie and has the sleeves-rolled-up mix of grit and weariness of a man who’s been doing social justice work in Iowa since the 1970s. He pounds the table as he talks about how the Democrats have talked a great game for decades, but done little. “I am sick and tired,” he says, “of being sick and tired of being fucked over by bullshit promises on the campaign trail.”

This election cycle, Espey thinks things will be different. “That right there,” he says, jabbing a finger toward a photograph in a photocopied article on the wall of CCI’s offices. “That right there is a movement candidate.”

The GOP’s aggressively antilabor agenda has inspired CCI to set up a PAC and take its first plunge into state-level politics, working on behalf of Glasson. She fits the 43-year-old community organizing group’s vision of movement politics: Her candidacy emerged from her role as president of SEIU Local 199, which represents healthcare and education workers in 20 bargaining units across the state. And she foregrounds issues that her six Democratic opponents shy away from: Big Ag’s role in Iowa’s water pollution problems, for example, and the need for single-payer, universal healthcare.

In These Times spoke with Glasson in the library of a cavernous Methodist church in Des Moines, where she was attending a training for a Planned Parenthood day of action at the state Capitol. “As a nurse, working in the healthcare field for decades, I’ve seen firsthand and I know: Private, for-profit insurance companies will always put profits over people,” she says. “Every single time.”

In addition to CCI and its national parent organization, People’s Action, Glasson is endorsed by Our Revolution, several chapters of Democratic Socialists of America, and National Nurses United, all of which are turning out volunteers on her behalf. She has about 800 volunteers statewide. SEIU locals, as well as the national organization, are investing heavily in the campaign, having contributed about $1.8 million as of February.

Iowa’s incumbent governor, Kim Reynolds, is a Republican, and the GOP controls both chambers of the legislature. Republican dominance has been a trainwreck for unions in Iowa. Last year, the state passed a law that gutted collective bargaining rights for public-sector workers. It has been a so-called right-to-work state since 1947. Repealing both laws is at the top of Glasson’s agenda, along with a $15 minimum wage.

Polling last fall showed that about two-thirds of respondents had never heard of Glasson. But her campaign is in a good place by other metrics.

At the Democratic caucus in February, she won about half the precincts that expressed a candidate preference. That strong showing was important because, if no candidate gets at least 35 percent of the vote in the June 5 primary—a likelihood given the crowded field—delegates to the Democratic Party state convention on June 16 will choose the nominee.

Glasson believes that, win or lose, her campaign presents a huge opportunity to influence the national political conversation in 2020.

“There’s absolutely no reason this base of progressive activists we’ve built shouldn’t be calling out presidential candidates on where they stand,” she says. “On Medicare for all, what’s your plan? And what are you going to do about giving workers a voice on the job through unions?”