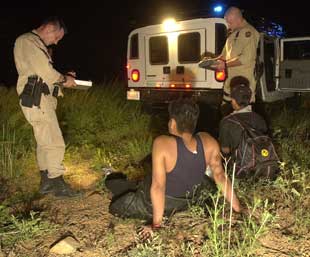 Agents in Arizona wait for transportation for two undocumented immigrants.

Federal agents are fanning out across the nation apprehending undocumented immigrants with a green light from the Bush administration.

Eight months ago Operation Endgame was placed on the fast track under the auspices of Immigration and Customs Enforcement, or ICE, the newly formed investigative arm of the Department of Homeland Security (see “Detention Blues,” p. 20) and one of three new bureaus of the former Immigration and Naturalization Service. With a bigger budget and more agents, the mandate is to catch some of the estimated 400,000 undocumented immigrants who have final removal orders and deport them.

Since March, civil rights groups nationwide have reported a marked increase in the questioning, detention and deportation of undocumented immigrants.

During a week in April, nearly 170 people were arrested on the East Coast following three flights from Los Angeles to Newark Liberty and JFK International airports.

In Houston, Texas, rumors of mass immigration raids created such panic in Latino neighborhoods that “they stopped sending their kids to school, stopped attending church, stopped going to work, there was a dramatic shift in the traffic,” says Arnaldo Garcia, of the National Network for Immigrant and Refugee Rights in Oakland, California.

According to civil rights organizations, agents have been employing a new tactic that targets one person to gain access to an apartment building or home, and then ends with the detaining and deporting of other undocumented immigrants. This happened May 6 in San Francisco when agents entered the residential Sunrise Hotel to detain a resident who allegedly violated immigration orders.

Agents caught their target, but pressed other residents for their legal status as they walked through the lobby on their way to work. Agents swept up nine undocumented workers; all but one signed voluntary deportation notices.

The raid drew the ire of city officials. San Francisco Supervisors Tom Ammiano and Chris Daly, in whose district the raid took place, introduced a resolution urging the FBI and ICE to stop targeting hardworking immigrants. It passed overwhelmingly. If immigrants are detained, the resolution requires “that access to legal counsel be provided, that they get access to a hearing and that their case be reviewed by a judge.”

“These kinds of raids should not be happening. It is unacceptable that these vulnerable families would have to deal with something like this,” Daly says.

ICE Deputy Field Office Director Tim Aiken disagrees. “This notion that we can’t question people about their immigration status because they weren’t the ones we’re looking for is complete nonsense. We have a right to do our job and we are enforcing the laws that Congress gave us.”

A similar situation occurred at a private residence in San Diego County. At 6 a.m. on March 18, agents pounded on Jose Luis Aguilar’s door. When he opened the door, agents forced their way in, according to a report filed by the American Friends Service Committee (AFSC), a national civil rights organization. The agents apparently were trying to capture an undocumented immigrant with a criminal record named Juan Rios. The current resident, Aguilar, knew nothing about Rios.

Even though Aguilar was not the target of their investigation and had no criminal record, agents questioned him and his family about their immigration status. They also questioned his neighbors. In all, a dozen undocumented immigrants were rounded up although authorities never found Rios.

“I never thought this would happen,” says Aguilar. “Yes, it can happen on the streets, you are vulnerable—but in your own house—no, not without having done anything.”

Says his attorney Susan Von Posern, “They can stop you in the park, on the bus, they can knock on your door.”

Since March, Border Patrol agents in San Diego have been searching for undocumented immigrants on public transportation in a program called Operation TransCheck.

Although federal agents deny these are “raids” or “sweeps,” community members continue to perceive them as such.

These roundups and detentions are devastating to families—who see their loved ones shackled and taken away in vans. “They [federal agents] operate on the fringes of the Constitution,” says Christian Ramirez, director of the AFSC in San Diego.

When asked about tactics and methods used by the agents to get citizenship status information, including allegations of racial profiling, Aiken stated: “We have the right based on behavioral cues and other circumstances that suggest to us there may be a violation, to pursue it. We are doing our job.”

Of increasing concern is the questioning of students riding the trolley. One shocking incident includes the questioning of a 16-year-old girl who was on her way to a charter high school in Chula Vista in San Diego County. According to the AFSC, a border patrol agent approached the girl and questioned her immigration status. “She provided her school ID and the agent did not accept the school ID as a valid form of identification,” says Ramirez. “Then they proceeded to ask for more information about where she lived and where she went to school.”

Added Ramirez, “Her complaint was that she felt threatened because the Border Patrol agent told her that he would travel to her school to verify that she was legally in the United States. As a result of this the young lady has failed to show up to school. She is very afraid.

“What documents do you need to provide to the Border Patrol to prove that you are legal in the United States? That’s a debate that needs to happen, unfortunately it’s taking place in the streets and not in the Supreme Court.”