Democrats Have Gone off the Rails in Rural America. Can a New Report Get Them Back on Track? 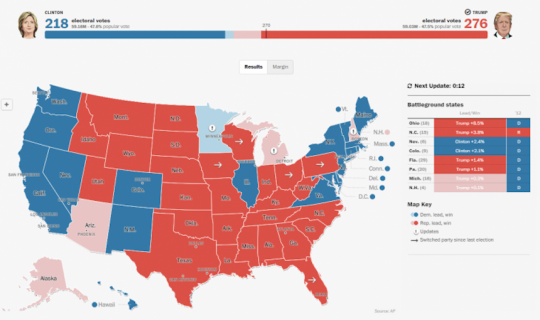 Democrats know their brand is in trouble—they have a belligerent, 239-pound daily reminder tweeting from the Oval Office—but if the party is counting on partisan outrage to win future elections, it’s only in for more pain.

Reclaiming victory from the jaws of defeat isn’t rocket science: The party needs to win back the rural, working-class voters that its been hemorrhaging since the 1990s. Unfortunately, however, the root causes of this mass-defection—a non-existent economic message for people living paycheck-to-paycheck, condescending coastal elitism, a pervasive intolerance of rural culture etc.—have not abated. Or, if these problems are being addressed by Democrats, news of that progress is failing to reach the rural people (i.e. voters) who need to hear it.

It was with this in mind that Democratic Congresswoman Cheri Bustos, who represents the 17th Congressional District in central, northwestern and northern Illinois, commissioned and co-authored a unique report. Aiming to reunite her party with the blue-collar Americans it used to champion, Hope From the Heartland: How Democrats Can Better Serve the Midwest by Bringing Rural, Working Class Wisdom to Washington compiles interviews with 72 current or former Democratic officials who, in recent years, won over their rural constituents despite the national popularity of the Republican opposition. According to the report, these were candidates who “bucked the trend and succeeded in the rural Midwest, now dominated by Republicans.”

The eight states comprising the nation’s “Heartland” are Illinois, Indiana, Iowa, Michigan, Minnesota, Missouri, Ohio and Wisconsin. These states, and the rural voters who live here, make or break presidential elections and shift the balance of power in both houses of Congress. They are battlegrounds that cannot be ignored.

Yet whether its on issues like the economy, agriculture, healthcare, infrastructure or social issues such as abortion, guns and religion, the current Democratic Party continues to abandon its promise of inclusion when it comes to those living outside of the big city. This report offers solutions—practical advice that national Democrats must heed in order to win upcoming elections.

By way of introduction, Bustos writes:

Democrats from rural areas face an existential crisis. The number of Democrats holding office across the nation is at its lowest point since the 1920s and the decline has been especially severe in rural America, whose economic fortunes have slipped markedly during this same period.

Donald Trump’s election in 2016 — with heavy support from rural voters — was not the first evidence of Democratic decline outside of urban areas. These challenges have been mounting since the 1990s.

The consequences of this deterioration are sobering for Democrats. In the Midwest, rural support for Donald Trump elevated him to upset wins in several states that propelled him to the White House. Rural areas contain many white, working class voters who were the key demographic of Trump’s victory. The 2016 outcome demonstrated that rural, working class voters will not be ignored.

By listening to those who succeeded where other Democrats are failing, the report’s overall goal is to assist the national party to better:

The full 51-page report addresses current political realities that, however inconvenient, are key to understanding (and, hopefully, addressing) the nation’s rural-urban, social and economic divides. While these divides are not necessarily new, they are growing due to prolonged neglect.

Below is some of what current and former rural Democratic elected officials said. In the interest of space, Rural America In These Times highlights only some of those comments on the rural-urban divide, the rural economy, rural social issues, and farmers and agriculture. Not included here are important sections on how Democrats can reach rural voters when it comes to infrastructure, education, healthcare, government waste and reform, and campaign strategies that work.

On the disconnect with rural voters

Bustos and Robin Johnson, a consultant and co-author of the report (which was paid for by CHER PAC), write:

This feeling stems from the economic realities of the rural Midwest. When national Democrats trumpeted economic recovery during the last election cycle, many areas faced — and continue to face — stagnant incomes, fewer good-paying jobs and limited opportunities for children to stay in the area.

Former Iowa State Rep. Patti Ruff puts it this way: “The ‘D’ by my name hurt, and the top-end campaign hurt the bottom-end campaign. It had an elitist bent, which didn’t fit for the working class.”

“We seem focused on things manifested in identity politics that don’t apply to rural,” says Illinois State Sen. Andy Manar,  “There was a vacuum with these voters, and Trump filled it. Democrats didn’t have a coherent message to rural voters and weren’t reaching out.”

Later, expanding on the need to transform the party into a “big tent,” the authors write:

Differences have always existed between rural and urban areas, but the rural officials we interviewed feel their way of life, views on issues and culture are increasingly objects of derision and condescension by ‘urban elites.’ Their perspective is that the party’s priorities are shaped by elites from the coasts and Heartland legislators pay the price for policies, attitudes and messages that are counter to their local cultures and mores.

The report reads, in part:

Not surprisingly, economic issues were cited with unanimity as the most important issue for the party. Many regions in the Heartland still haven’t fully recovered from previous economic downturns. While unemployment rates are low, incomes are stagnant and the loss of manufacturing jobs removed a source of good-paying jobs that have been replaced by jobs that pay less and provide no benefits.

“We never recovered from the economic recession of the 1980s,” says former State Rep. Phil Tate from northwestern Missouri. “The recession, coupled with the downturn in the garment and textile industries, have left this region hurting economically to this day.”

“The party should back either higher wages or lower taxes or both. Providing services and programs is not always the answer,” says Iowa State Sen. Tod Bowman, suggesting instead tax reductions and a minimum wage increase.

Former Missouri State Rep. Phil Tate: “People are making less money comparatively than 15 years ago. These people are tired of the status quo.”

Minnesota State Rep. Jeanne Poppe,  “Go back to the 1950’s for what mattered most to people — buy a house, trade in a car every couple of years — not for solutions but to lay out broadly what Americans wanted most.”

Former Indiana State Rep. Russ Stilwell: “All my constituents expected and wanted was to have the opportunity for a good job with decent wages, health care and a chance for a respectable retirement, and hope the next generation would have more opportunities than the last one.”

Former Indiana State Rep. Dennie Oxley: “Make working class people, who say ‘I’m working my ass off here and making less money,’ say ‘This is the party speaking for me.’ ”

Perhaps the biggest complaint we heard from rural Democrats in the Heartland is that the Democratic Party, traditionally a party that welcomes diversity and inclusion, has become intolerant of dissenting views, especially on social issues.

Former Michigan State Rep. Collene Lamonte says the party’s message in 2016 “didn’t align with what we were hearing at the doors. We lost our ability to talk to these people in a way they can trust us.”

State Rep. Nick Celebrezze, who represents a metro working class district in Ohio, says that that while knocking doors last fall that he heard over and over that “Democrats are talking bathrooms while Republicans are talking jobs.”

According to the report, “Many [of those interviewed] expressed concerns with choice litmus tests and the impact that has on rural Democrats.”

Julie Berry, who ran a close race for the Indiana Senate, says, “If (the party position is that Democrats can’t be pro-life)… then, no, there isn’t room for people like me.”

Former Ohio State Rep. Nick Barborak, who considers himself pro-choice, says, if the party rejects candidates who are pro-life, “we might as well write off eastern Ohio.”

One Iowa legislator speaks of “out-front issues and back issues,” and an Ohio legislator says social issues “are important but not the focus of what our message should be.” Another former legislator says, “It’s not retreating to emphasize economic concerns in rural areas that are more unifying than cultural issues.”

Former Michigan State Rep. Terry Brown suggests reframing the issue. “When people hear pro-choice, they think anti-life.” He suggests the party change its messaging to reflect Democratic support for the “culture of life” which includes support for schools, health care and retirement security.

Perhaps no issue symbolizes the urban-rural divide more than guns. Rural Democrats interviewed described a feeling that their urban counterparts just don’t understand the cultural dimension of this issue.

Former Missouri State Rep. Phil Tate traces Democrats’ declining performance in rural areas to Bill Clinton and his gun control proposals in the 1990s. Republicans took the issue and “elevated it way beyond what it should have been.”

Ohio State Rep. John Patterson describes the issue in terms of the economic dislocations in rural areas. “Jobs leave, businesses leave,” he says. “There’s an additional sense of loss when their kids leave. Guns are seen as the last straw. Hunting and guns are part of the culture — it’s who we are.”

Former Illinois State Sen. Gary Forby says the gun issue is a major reason why Democrats have lost the votes of union members in his district, deep in southern Illinois: “When I walked into union halls they talked concealed carry first and union issues second.”

Indiana State Senate candidate Julie Berry says the Democratic brand has been tarnished as “unpatriotic” and too many people think “we don’t love God and country.” She adds, “Faith has to be a part of the conversation — all faiths and tolerance. The Republicans do NOT have a monopoly on faith.”

Indiana Senate candidate Chuck Freiberger says Democrats need to “reframe family and moral issues along the lines of hard work, religion, family, and that includes women’s and LGBT issues, where people are coming around. Hatred, as preached by Trump, is not a family value.”

On farmers and agriculture

This section, in the opinion of Rural America In These Times, is shorter than it ought to be. Nevertheless, it reads:

Iowa State Sen. Tod Bowman traces the problems of Democrats to the farming culture and that they do not compete for farm votes. While the number of farms has shrunk due to consolidation, Bowman and other rural legislators point out the prevalence of part-time farmers, those who own fewer than 200 acres and those who rent out acreage. They may not be big landowners but still represent the farm culture of “looking at the bottom line, being more individualistic…and being averse to taxes and regulation.”

“Don’t tell them what to do; get buy-in from them,” says Iowa State Sen. Kevin Kinney.

“We need to bring farmers and miners into the conversation about regulation,” says former Minnesota State Rep. Terry Morrow.

“We need to reach out to farmers more .  No one talks to them,” says former Ohio State Rep. Chris Redfern.
You can read the full report here, and, please, add your own thoughts in the comments section below. This is an important issue.
Follow @RuralAmericaITT