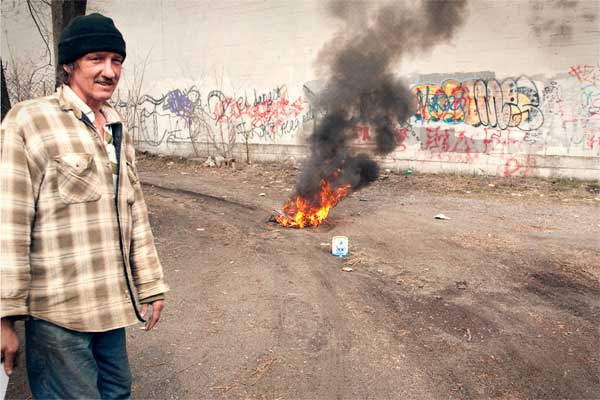 In southwest Detroit, a scrapper coats a pile of copper wire in house paint and then set it alight to burn off the outer insulation. (Photo by Tom Stoye)

A few entrepreneurs pick through the ruins for profit.

Last year, in broad daylight, scrappers in Tom Fayz’s neighborhood pulled down two telephone poles with a pickup to get at the transformers, robbing residents of electric and phone service.

The Henry and Edsel Ford Auditorium is a white, wedge-shaped building that fronts the Detroit River. Despite its terrible acoustics, the Ford was home to the Detroit Symphony Orchestra for 33 years. After the orchestra’s departure in 1989, the Ford sat empty. Over the next two decades, plans to repurpose the modernist theater into a corporate headquarters, a gospel music hall of fame and an aquarium, respectively, fell through. In 2010, the mayor’s office announced that the Ford would be torn down and replaced with a park.

The city has bolted plate iron across the Ford’s front doors, so Mo climbs in through a broken window. Standing in an old dressing room, Mo dusts the snow off his camouflage pants and replaces the plywood board covering the glass, for privacy. He is a short, agile man with a pushbroom moustache, a bald head and a quick smile. In the sack under his arm are a screwdriver, a hacksaw and a flashlight. Most scrappers carry small magnets to distinguish iron from aluminum, but not Mo, who claims that after 25 years of scrapping, he can tell them apart by sight.

The lobby’s carpet is coated with refuse from several generations of squatters: soiled clothes, plastic vodka pints, cigarette butts, potato chip bags, charred cans of Sterno. Paint hangs from the ceiling in leaves, and the chirping of a flock of small brown birds floats through the chill air. Mo lived here for several months last winter, sleeping on a flatbed cart that remains piled high with quilts and emergency blankets. He makes his way up one side of the grand staircase, which lacks one of its stainless steel banisters. Mo says a novice scrapper, mistaking the steel for a more valuable metal, stole it.

In the projection room, Mo works quickly, separating the coaxial from the audio-visual cables and spooling the bundled copper wire into plastic bags. His flashlight is propped on an old reel-to-reel, the beam just bright enough for him to see his own hands, which are gnarled and crusted with gray scars. Beside him, a line of diecast aluminum projectors are aimed over the rows of red velvet seats below.

“If I were to get just one of these babies out of here I’d be doing good,” he murmurs. “But they’re too damn big.”

Wires are low-hanging fruit. The real money is in pipes, so Mo heads down to the basement. The walls and ceilings of the Ford’s old offices bear man-sized holes, knocked in with a sledgehammer by some of Mo’s colleagues. Along a corridor, Mo spies a length of copper running along a wall. The dark pipe is coated in a pale asbestos sheath. Using his hacksaw, Mo cuts straight into the insulation. A cloud of chalky white fibers billows into his face. He continues until the pipe has been reduced to sections small enough to fit in his bags.

After several hours, Mo has collected all the scrap he can carry. He hops on a bus to the west side, where a scrap yard weighs the metal and hands him a check for $138. That makes about $700 for the week.

In the last decade, 250,000 people have left Detroit. An estimated 60,000 buildings sit abandoned. As the city empties, the millions of tons of copper, aluminum, brass, steel, iron and tin used to erect the Motor City are being shipped out, in the form of scrap, much of it to China.

As Detroit’s jobs continue to disappear and the foreclosure crisis swells its ranks of vacant buildings, an increasing number of residents have turned to scrapping. For some, like Mo, scrapping is a profession. For others, it’s just another hustle, like collecting cans or passing out handbills, one of the dozens of marginal occupations in a city in which a quarter of the population has no job.

“First week of the month is always the slowest,” says Stanley Beltzman of McNichols Scrap Iron & Metal, a scrap yard on the city’s east side. “That’s when the checks come in.”

Free market principles apply as much to scrapping as they do to any industry. When scrap metal prices shoot up, more people get into the game. In February, scrap copper reached $4.57 per pound, a 40-year high. At around the same time, Will, 49, found himself freshly out of prison and jobless.

“I’ve been looking for work,” he says. “I been to every restaurant downtown, every parking structure.” After a friend paid him to help haul some iron from a construction site, Will started scrapping on his own. Some days he’ll make $10, other days he’ll make 10 times that. He acknowledges that it’s illegal, but not as illegal as other things he could be doing. “I got a ‘D’ prefix,” he says, referring to his four felony convictions, “and I ain’t trying to go back.”

Much of the harvested scrap is stolen from homes and buildings such as the Ford. Scrap yards are not legally allowed to accept stolen scrap. All yards in Detroit require that scrappers selling metal provide identification and the address from which the scrap came. Some demand more thorough documentation or even fingerprints.

Yet few scrap yards do much checking, and scrappers have ways of evading regulation. For example, most yards only accept scrap delivered by vehicle. So scrappers without automobiles hire vans or trucks–“jitneys”–to haul their loads. Drivers charge $35 to haul scrap across town, but only $20 if the scrappers have made it just outside a yard. If all else fails, a scrapper can sell his metal to an unlicensed scrap broker. Most of these brokers operate out of their homes, using scales in the basement or backyard. An illegal broker will pay half what a licensed one will, but they’re open 24 hours and never ask where the scrap came from.

Nationally, Detroit’s scrappers have a reputation among security experts for unusual organization and aggressiveness. Virtually everyone who lives in the city has either been the victim of a scrapper or knows someone who has.

“If [scrappers] see a house is unoccupied, within two weeks it’s stripped,” says Tom Fayz, president of the Springdale-Woodmere Block Club, located in the city’s southwest side.

Last year, scrappers in his neighborhood pulled down two telephone poles with a pickup truck just to get at the transformers, robbing residents of electric and phone service. The crime occurred in broad daylight, next to an elementary school.

None of the half-dozen scrappers I spoke with would admit to hitting houses. Mo claims to scrap only abandoned big buildings, for economic, if not ethical reasons. “Houses just aren’t worth my time,” he says. “Not enough metal in ‘em.”

Scrappers inspire a special loathing among Detroiters. Few things are more dispiriting than watching your city loot itself. The carcasses of two of Detroit’s once poshest hotels, the Eddystone and the Royal Palm, loom over the city’s Cass Corridor neighborhood like twin monoliths. In the light of the morning, the facades are pink and unnaturally smooth: scrappers having stripped them of their Beaux Arts ornaments.

Across the street is Link, thin and febrile, a human spark plug. His grandfather was a master carpenter and a plumber. He boasts he can dismantle almost anything. Today, he’s clipped down a length of chain link fence that, until last month, enclosed a fleet of taxi cabs. Link has laid the fence down and rolls it up like a carpet. He says the owner of the liquor store down the street put him onto the score.

“I don’t see the harm,” he says, blowing Newport smoke through the gaps in his teeth. “It’s all coming down anyway.”

Editor’s note: This story’s original photo caption referred to the man pictured as “Timmy.” The name was a pseudonym that should not have been included with the story. We regret the error.

Matthew Wolfe lives in Brooklyn, N.Y., and Detroit, Mich. He is currently working on a book about felons.