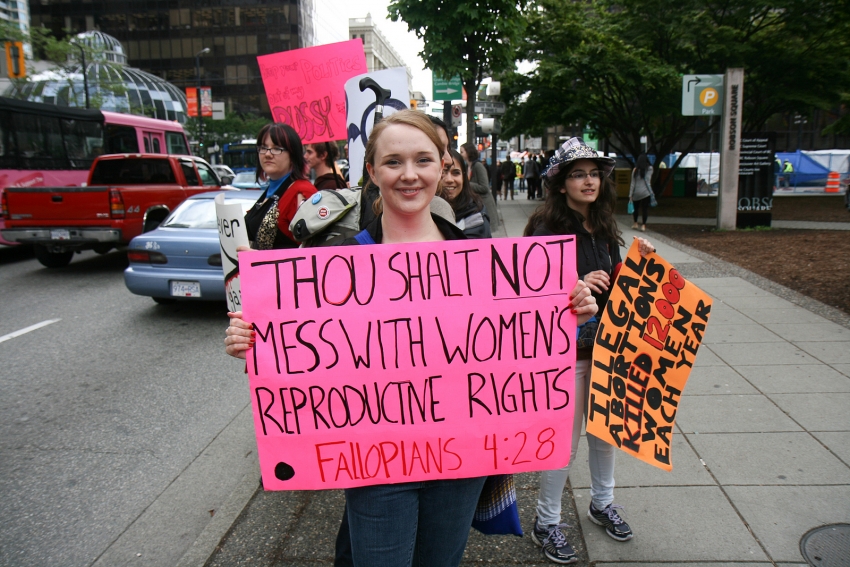 It's time for the pro-choice movement to stop wringing its hands over abortion. (Sylvia McFadden / Flickr)

The way many progressives talk about abortion makes it sound like reproductive autonomy is a social faux pas, like taking the last slice of pizza at the pizza party. Not criminal, sure, but are you sure you need it?

Katha Pollitt’s Pro: Reclaiming Abortion Rights is a deeply felt and well-researched book which argues that abortion, despite what any of its opponents might claim, is a palpable social good. Progressives, Pollitt says, can and must treat abortion as an unequivocal positive rather than a “necessary evil”; there is no ethical, humane way to limit abortion rights. The fact that Pollitt needs to make this argument in 2014, however, seems to indicate that pro-choicers have long been a little too nice for our own good.

Which is something Pollitt herself points out, many times. There are the obvious truisms about abortion ideally being “safe, legal, and rare,” sure. Pollitt also cites Roger Rosenblatt's formulation of “permit but discourage,” which makes it sound like reproductive autonomy is a form of social faux pas, like taking the last slice of pizza at the pizza party. Not criminal, sure, but are you sure you need it?

But the language of apology for abortion has seeped ever deeper into our language:

Anywhere you look or listen, you find pro-choicers falling over themselves to use words like “thorny,” “vexed,” “complex” and “difficult.” How often have you heard abortion described as '”he hardest decision,” or “the most painful choice” a woman ever makes, as if every single woman who gets pregnant by accident seriously considers having a baby, only a few weeks earlier the furthest thing from her mind, and for very good reason?

The end of the line, Pollitt says, is the sort of ridiculous decision made by Planned Parenthood in 2013 to move away from the term “pro-choice,” which “was itself a bit of a euphemism: Choose what?” We can hardly be expected to defend abortion effectively if we can't even call the procedure by name.

Pollitt convincingly outlines the many reasons that abortion is not only necessary but good for society: “always a choice,” as she writes, “and often a deeply moral decision.”

First, and most obviously, if you have a uterus, your life depends on being able to control what goes on inside of it; giving birth necessarily represents a drastic lifestyle change and heavy financial responsibility, which lasts anywhere from nine months to the rest of your natural-born life. Therefore, in order to effectively plan a life and career, you must have some guarantee that you will never be forced to take on the risk or cost of childbirth unless you choose to do so. Birth control and abortion are the only ways to provide such a guarantee. If we are to have leaders and geniuses with uteruses, we must provide them with the reproductive freedom necessary to go to school and build careers.

Pregnancy is also a health risk: Women and girls can and do die from childbirth and pregnancy. There are plenty of other health risks, common and uncommon, that attend upon pregnancy. Michelle Lee, whose story Pollitt cites in her book, required a heart transplant, which she could not receive while she stayed pregnant. Yet doctors at Louisiana State Medical Center denied her the necessary abortion, and therefore also the transplant, because the hospital rules stated that the risk of death from her pregnancy had to be greater than 50 percent before they could abort.

Abortion saves lives, and even if your life is not directly or immediately endangered by your pregnancy, I don’t have the right to force you to risk life and limb, or go through drastic and painful physical experiences like labor, simply because I prefer that you stay pregnant.

And, finally, abortion prevents suffering—not only the emotional, physical and financial suffering of parents, but that of infants. Some fetal defects, such as bilateral renal agenesis (lack of both kidneys) or anencephaly (lack of an upper brain and skull) are simply not survivable. We’re not talking disabilities, we’re talking death sentences: If the pregnancy is brought to term, the child will die, usually within hours or days of birth.

Any reasonable person would presumably agree that it’s senseless and inhumane to force a family that is already losing a pregnancy to endure the longest and most painful version of that loss, or to condemn a child to unavoidable, lethal suffering, simply so that strangers can have the satisfaction of knowing it died outside the womb. Yet not only do anti-abortion advocates encourage women to carry non-viable fetuses to term, Pollitt unearths a horrifying story of a 17-year-old in Peru who was denied an abortion by Peruvian law, and who was therefore forced to give birth to, and breastfeed, an anencephalic child who lived for four days.

This, along with tales of women who entered sepsis or died because they could not receive abortions while they were miscarrying, constitutes the dark end of the road for anti-abortion arguments: The culture of “life” that anti-choice movements want actually brings tragedy and death by failing to recognize reality.

Pollitt’s arguments for abortion are convincing and thorough. The amount of time she spends logically deconstructing the “Biblical” arguments against reproductive choice alone is commendable. (And funny: “The Old Testament is a very long book, full of bans and pronouncements and detailed instructions about daily life—what to wear, what not to eat, how to harvest your crops. It condemns many activities. … But there is no mention of abortion.”)

She also outlines, in depressing detail, the impact of the misinformation promulgated by the anti-abortion lobby, convincing huge numbers of women that abortion causes cancer, or depression, or suicide. Yet many of those women seek out abortions anyway. Indeed, Pollitt argues, the fact that women are willing to have abortions that they believe might kill them (or, in pre-Roe v. Wade times, to have illegal abortions that did kill and drastically injure them) only demonstrates how urgent and necessary abortion is.

And yet none of this is likely to convince dyed-in-the-wool abortion opponents. Dismantling fetal “personhood” with logical or scientific (or even Biblical) arguments does nothing to convince those who believe a fertilized egg is a human being, because those beliefs have never been founded on logic or science. They’re emotional. You can’t argue emotions.

But you don’t necessarily have to respect them, either—particularly not when they require you to behave in ways that cause harm.

Pollitt’s most piercing argument is that progressives have given too much ground on this issue, to their own detriment: “For years,” she writes, “a robust school of progressive thinking called women who were alarmed about the future of reproductive rights naive. The Republican Party isn’t serious about restricting abortion, they claimed, politicians just talk like that to keep the base motivated.”

This isn't ancient history; Thomas Frank's What's the Matter with Kansas?, one of the books she cites as having argued this, appeared in 2004 and was a bestseller throughout that decade. We argued that abortion opponents weren't really serious right up until the time that we found ourselves fighting not only for legal abortion, but for the continued legality of birth control.

In other words, trying to be compassionate, to give anti-choicers the benefit of the doubt, has only resulted in progressives failing to make their own case. We’re dealing, Pollitt says, with “40 years of apologetic rhetoric, 40 years of searching for arguments that will support legal abortion while never, ever implying that it is an easy decision or a good thing,” and this has only gotten us stuck “making the same limited, defensive arguments again and again.”

Progressives have apologized for being right. But we don’t have to. Abortion saves lives, improves lives, and makes for a stronger society. The facts are decisively on our side.

Most profoundly, Pollitt’s book is a call for us all to reclaim and speak out about the truths we know. Personally, I like abortion. I've never needed one. I'm still glad to have the option. I'm glad for the people I've known who got pregnant at the wrong time, with the wrong people, and didn't have their lives ruined by it.

If Pollitt gets her way, more of us might feel free to admit that, hey: We like abortion.