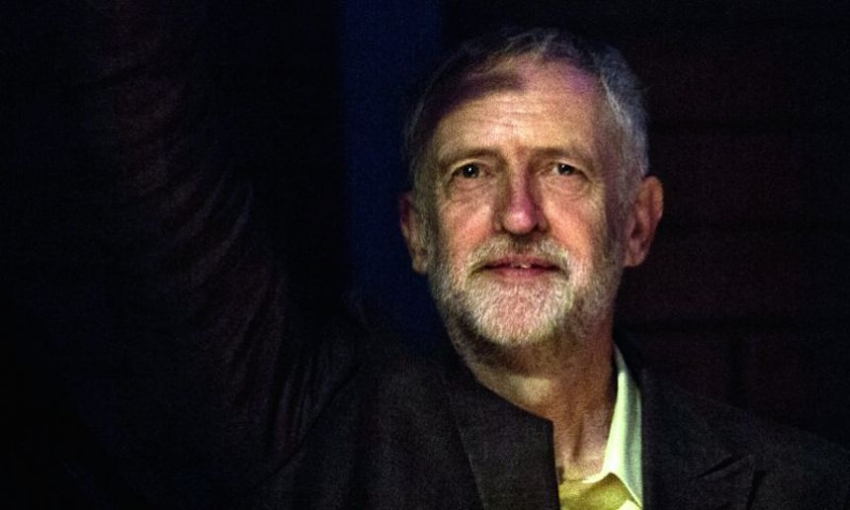 The New Yorker‘s photo of Jeremy Corbyn—with the color and exposure adjusted properly so he doesn’t look so sinister. (Rob Stothard / Getty Images)

The problem faced by the moderate-left parties in this story is not a real economic constraint, but rather their failure to understand economics.

The landslide victory of left-wing candidate Jeremy Corbyn for Labour Party leader in the United Kingdom has many establishment types bent out of shape. The Blair wing of the party was literally obliterated, with Corbyn drawing more than four times the votes of his nearest competitor. After giving the country the war in Iraq, and the housing bubble whose collapse led to the 2008-2009 recession and financial crisis, the discontent of the Labour Party’s rank and file is understandable.

But naturally the elite types are fighting back. In this vein we get a lengthy piece in the New Yorker by film critic Anthony Lane warning us of the evils of Jeremy Corbyn. I will leave for others the discussion of Corbyn’s friends and associates. I am mostly interested in Lane’s treatment of Corbyn’s economic agenda. He tells readers:

The national deficit would be erased not through austerity, as practiced by the heinous Conservatives, but through taxes on the rich and by what Corbyn calls “quantitative easing for people.” This means, we are told, that the Bank of England will print more money: an endearing and almost childlike solution, though not one that has met with unqualified success elsewhere.

First off, “quantitative easing for people” is obviously a political slogan. As such, it is not obviously more silly than “putting people first” or “yes we can.” The issue is the substance behind the slogan.

What Corbyn is proposing is directly financing spending by printing money. If that is “childlike,” then folks like Paul Krugman have a similar affinity for childlike solutions to economic problems. Just last week, in reference to Japan’s continuing economic weakness, Krugman told readers:

What’s remarkable about this record of dubious achievement is that there actually is a surefire way to fight deflation: When you print money, don’t use it to buy assets; use it to buy stuff. That is, run budget deficits paid for with the printing press.

By “stuff,” Krugman means things like childcare, schools, hospitals, cutting-edge internet, research into clean energy and other useful items. If the economy is suffering from a lack of demand, the government can directly create it by spending money. And, since the economy is below its potential, it doesn’t need tax money to finance this spending. It doesn’t even need to borrow; it can simply print the money.

But wouldn’t this cause inflation? Hmmm, we started with a story where the problem was deflation, or at least an inflation rate that is too low. This means that if the government’s spending and printing money leads to more inflation, then it is getting us exactly what we want.

There are plenty of other well-respected economists who would share in Krugman’s childlike thinking. One can question whether Corbyn has the best mechanism for allocating this spending, and whether he has stopgaps in place to make sure that it doesn’t go too far and lead to actual problems with inflation, but his basic position rests on very solid economics.

If Lane were the only person confidently making ungrounded economic assertions, we could dismiss the article as the result of the New Yorker's difficulties in getting qualified writers, but unfortunately this sort of thinking dominates elite circles. Just last week, E.J. Dionne, an unusually thoughtful Washington Post columnist, commented on NPR on the rise of outsiders like Corbyn:

And I think the collapse—the economic collapse in 2008 and the trouble everybody’s having to get their footing again—is at the heart of these problems. In good times, moderate-right parties can defend capitalism, moderate-left parties can spread around money and redistribute it, but when capitalists behave badly, the center-right has trouble defending the economic establishment and the moderate-left faces a harder left. You see it in Syriza, to some degree Bernie Sanders, Jeremy Corbyn, the—who’s a left-wing frontrunner to lead the Labour Party in Britain. They all have strong grounds for attacking the system.

The irony here is that Dionne has the situation exactly reversed. In more normal economic times, when the economy is near its potential, the only way moderate-left parties can finance new programs is either through new taxes or by cutting other spending. The economy is up against its capacity constraints, so there are no free lunches. By contrast, in the current situation, where there are large numbers of idle workers and productive capacity, the government actually can spread money around without worrying about where it will get it. Again, the problem is too little demand, so we don’t have to worry about pulling resources away from anywhere.

The problem faced by the moderate-left parties in this story is not a real economic constraint, but rather their failure to understand economics. They apparently prefer to believe stories their parents told them about the evils of debt rather than trying to understand how the economy actually works. For this incredible level of intellectual laziness, these parties and candidates deserve the contempt they are getting from the electorate.

What the U.S. Left Can Learn From the Labour Party’s Epic Loss