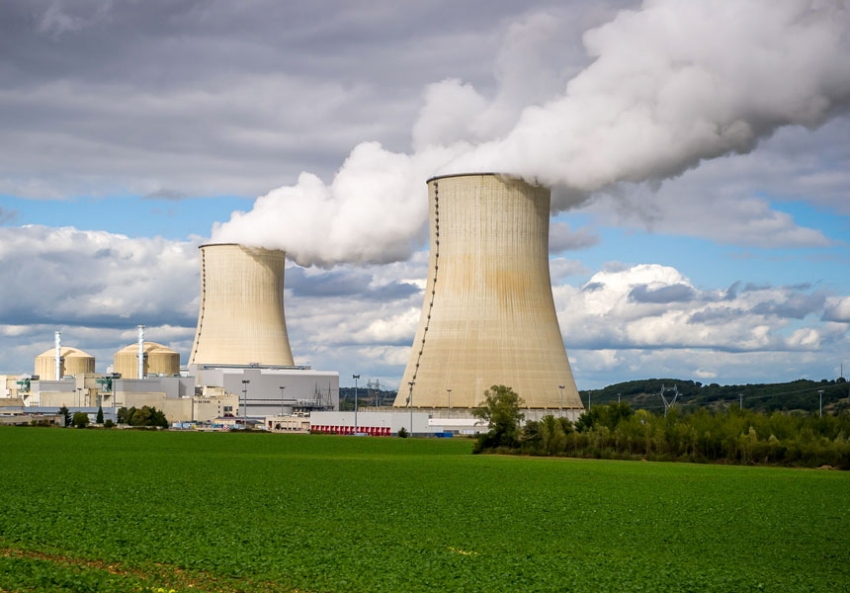 The Civaux Nuclear Power Plant on the Vienne River southeast of Poitiers, features 180-meter-high cooling towers, which are the tallest in France. (Guillaume Souvant/AFP/Getty Images)

Is Bernie Sanders Right That It’s Time to Phase Out Nuclear Energy?

30 years after Chernobyl, some say we need nuclear power to stop climate change.

BY Will Boisvert and Jim Riccio
Share TweetReddit5 EmailPrint

'The climate will definitely feel the burn: Closing a typical 1,000-megawatt reactor would directly or indirectly put an extra 3 million to 8 million tons of carbon dioxide into the air each year.'

In advance of New York’s April 19 primary, presidential candidate Bernie Sanders characterized the 40-plus-year-old Indian Point nuclear power station located 36 miles north of Midtown Manhattan as “a catastrophe waiting to happen” that should be shut down.

Sanders’ statements in New York were no surprise. His ambitious plan to combat climate change includes a phase-out of the nation’s nuclear power plants, which currently account for about one-fifth of U.S. electricity production. Instead, he proposes working toward a 100 percent clean-energy system by investing heavily in wind, solar and geothermal.

Hillary Clinton, meanwhile, has called for investment in nuclear power alongside renewable energy as part of her plan to modernize the U.S. energy infrastructure. She opposes shuttering Indian Point, which is currently being reviewed for license renewal by the Nuclear Regulatory Commission.

As a senator, Clinton called for greater oversight and increased safety measures at the nuclear power plant, but in an interview with the New York television show Capital Tonight in early April, she painted Sanders’ call to close it as naïve. “We also have to be realistic,” she said. “You get 25 percent of the electricity in the greater New York City area from Indian Point. I don’t want middle-class taxpayers to see a huge rate increase.”

Nuclear power isn’t just a flashpoint in the presidential campaign; it’s a subject of deep disagreement among environmentalists. While a vibrant anti-nuclear movement once guided progressive opinion, some greens have reversed their stance because of the immediacy of climate change. The operation of nuclear power plants is virtually carbon-neutral, although the processes of mining and enriching uranium fuel, operating backup generators and disposing of waste all produce emissions. Still, nuclear presents far less of a threat to the climate than oil and fracked gas, and advocates say that the opposition is more ideological than evidence-based.

Potential safety threats are another matter: The Chernobyl explosion and meltdown, which took place 30 years ago, as well as the 2011 disaster at Fukushima cast a long shadow over the nuclear-energy debate. Uranium mining can also be hazardous to workers and the environment. And then there’s the problem of where to store spent fuel rods.

Is Bernie right to call for a phase-out of Indian Point and push for 100 percent renewables? Or do we need nuclear, for now, to power us to a low-carbon future? To discuss, In These Times invited Will Boisvert, a journalist who writes on energy, environmental and urban policy for The New York Observer, Dissent and other publications, and Jim Riccio, a nuclear policy analyst at Greenpeace USA.

WILL: As a leftist, I’ve cheered on Bernie Sanders’ economic policies, healthcare plan and Wall Street bashing. But as an environmentalist, I cringe at his crazy campaign against nuclear power. Here’s how crazy it is: With climate change intensifying, Bernie would trash America’s biggest source of clean energy.

Nuclear power produces 20 percent of America’s electricity and 59 percent of its low-carbon electricity. That’s 42 percent more than all renewables and three times as much as the nation’s wind and solar sectors combined. So what would Bernie’s plan do with that gusher of emissions-free energy?

Shut it down, that’s what. He plans to ban the relicensing of reactors, which would cut 20 to 40 years off the service life of nuclear plants, on the way to completely eradicating atomic energy.

The result would be a windfall for King Coal and fracked gas. Even if nukes were nominally replaced by renewable capacity, every kilowatt-hour of renewable electricity that’s used to replace lost nuclear power is a kilowatt-hour that’s not available to displace fossil fuels from the grid. Under Sanders’ plan, coal and gas plants would blaze on while renewables fruitlessly plug the gap left by a nuclear phase-out. Decarbonization would make no headway for decades. The climate will definitely feel the burn: Closing a typical 1,000-megawatt reactor would directly or indirectly put an extra 3 million to 8 million tons of carbon dioxide into the air each year, by my calculation. A nuclear shutdown would cause billions of tons of needless greenhouse emissions.

Bernie and others on the Left sometimes trumpet all this as a populist insurrection against a parasitic nuclear industry dependent on government bailouts. But the real issue is safety fears, voiced in Bernie’s many comments about the Fukushima nuclear accident, which play to a familiar green theme that nuclear power is a unique threat to public health that must be abolished. Unfortunately, these anxieties have grown drastically out of proportion to actual risks while ignoring the health benefits nuclear confers by replacing polluting coal-fired power. (Climate scientist James Hansen reckons the total number of lives saved by nuclear power at 1.8 million.) We should worry less about vanishingly likely nuclear accidents and more about coal plants, whose pollution kills 7,500 Americans annually—seven times the total Fukushima toll every year.

A politics of exaggerated fear has stoked the anti-nuclear movement for decades, and Bernie’s most recent anti-nuclear crusade is a left-wing analog to the Trumped-up fears—of Muslims, immigrants, WMDs—that disfigure right-wing politics. Luckily, many progressives are starting to reject that fear, and to accept nuclear power’s crucial role in reducing the real risks of global warming, pollution and energy poverty.

Five years after the fiasco at Fukushima in Japan and 30 years after the explosion of the Chernobyl reactor in Ukraine, nuclear power in the United States is fading and fading fast. Despite the nuclear industry’s hype around a so-called renaissance, more new nuclear capacity has been shelved than is actually under construction in the United States.

Meanwhile, new nuclear reactors are so stupidly expensive that few will ever be built. Despite U.S. government loan guarantees and years of government subsidies for nuclear power, there are only two new plants, with five nuclear reactors, currently under construction in the United States. Both of the new nuclear plant projects in Georgia and South Carolina are already well over budget and behind schedule. According to the Atlanta Journal & Constitution, the Vogtle nuclear plant expansion in Georgia is three years behind schedule and $3 billion over budget.

Utility companies are also getting out of the nuclear game—since 2008, they have suspended more new nuclear reactor license reviews than they’ve completed, after wasting hundreds, if not thousands, of hours of nuclear regulators’ time and effort. In Virginia, the attorney general’s office has called for Dominion Power to abandon its plans for a third reactor at the North Anna nuclear plant site, in order to avoid wasting billions of dollars on this excessively expensive source of power. Expert testimony for the attorney general’s office shows that Dominion would spend over $19 billion on the new reactor at the North Anna site near Fredericksburg, which would cause electric rates in the state to rise by 25 percent.

Phasing out old and economically challenged nuclear plants is the right thing to do, especially if we are to avoid a Fukushima or a Chernobyl on U.S. soil. Replacing those retired reactors with safe and affordable renewable energy will allow us to abate the most catastrophic consequences of climate change.

WILL: It’s harder to replace nuclear in the real world than it is in a Greenpeace manifesto. Despite large subsidies, over the last five years renewable generation in the United States rose just 49 terawatt-hours. At that rate, “fast to deploy” renewables will grow enough to replace the current 797 terawatt-hours of nuclear output in 81 years—with none of that increase displacing fossil-fueled electricity. That’s the math: Less nuclear equals more coal, more fracking, more global warming.

Progressives shouldn’t invoke market competition to defend biased policies that squander low-carbon capacity. Yes, a few nuclear plants in deregulated electricity markets have been hammered by cheap gas-fired power that depresses prices. They need a subsidy of a penny per kilowatt-hour to stay afloat. It’s hardly more “affordable” to close them and build wind turbines, which get 2.3 cents per kilowatt-hour in federal subsidies (or a 30 percent subsidy of construction costs) on top of state subsidies.

As for new nuclear plants, they are competitive globally: last year’s crop of reactors added as much effective capacity as the wind or solar sectors did, at one-third the cost. Some proposed American projects are too expensive, but most are financially pretty smart considering their phenomenal productivity. Electricity from the Vogtle reactors will cost $65 billion over 60 years; but spread over their colossal output of 1,056 terawatt-hours, that comes to a reasonable 6.2 cents per kilowatt-hour. And Vogtle’s 24/7 power won’t conk out whenever the wind dies or the sun sets. Thanks to that reliability, the five reactors under construction in the United States will generate more electricity each year than the entire American solar sector did in 2015. If nuclear got the same subsidies as renewables, more would get built.

Let’s support subsidies and mandates for all clean energy, renewable and nuclear, until our energy is clean.

Running old, dangerous and economically challenged nuclear reactors like Indian Point on a shoestring budget tempts fate. Continuing to run reactors for 60 and 80 years, even if safety goals are achieved, is like playing Russian roulette with a nuclear reactor. How many times does the nuclear industry expect Americans to pull the trigger? Phasing out reactors that have operated for 40 years and replacing them with clean, safe and renewable energy makes sense and is the responsible thing to do.

U.S. energy policy need not be a choice between nuclear power, coal or fracked gas, and all the risks each brings. Bloomberg New Energy Finance (BNEF) projections show that renewable energy from wind and solar is expected to increase 59 percent and 233 percent respectively by the end of 2021. BNEF projects 103 GW of electricity from new solar and wind projects in just the next five years. And 68 percent of all new electricity added to the grid last year was from renewable energy. The energy revolution is underway, and nuclear power just can’t compete.

Editor's note: The introduction of this piece has been corrected to clarify that Bernie Sanders'  energy proposal involves investing in wind, solar and geothermal.

Will Boisvert and Jim Riccio

Will Boisvert is an In These Times contributing editor. He writes on energy, environmental and urban policy for The New York Observer, Dissent and other publications. Jim Riccio is a nuclear policy analyst at Greenpeace USA.