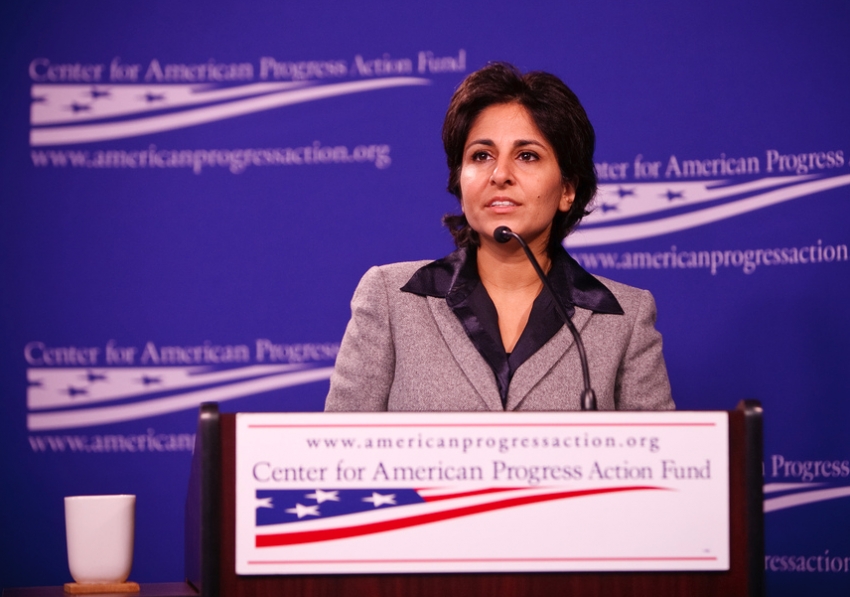 Disappointed By the Democratic Party Platform? Follow the Money.

Bill McKibben complained that while everyone on the drafting committee agreed fossil fuels had to be phased out by 2050, the delegates voted down every specific proposal for doing so.

Depending on who you ask, the 2016 Democratic platform is either “the most progressive platform in Democratic Party history” or a “major betrayal.” Regardless of how you view it, however, there’s no denying that the platform compromises on certain core progressive values—and some of that can be traced to the platform drafting committee, which met last month to hammer out a first draft.

When the committee had finished its deliberations, many progressives initially were outraged. The draft made several major concessions to the pro-Bernie Sanders contingent of the party, on issues ranging from abolishing the death penalty to expanding Social Security, but committee delegates chosen by Hillary Clinton and Democratic National Committee Chair Debbie Wasserman Schultz voted down several other measures dear to progressives’ hearts: amendments advocating single payer health care and a $15 minimum wage indexed to inflation, several proposals to halt climate change, language criticizing Israeli “occupation” of Palestine and an amendment explicitly opposing the TPP trade agreement.

There are many reasons some committee members may have had to oppose these progressive policies: personal ideology, fealty to Clinton or, in the case of the TPP, pressure from the Obama administration. On top of all that, however, several delegates have financial interests directly opposed to the Sanders-inspired planks.

Howard Berman, a former U.S. Representative who now works as a lobbyist for Covington & Burling LLP, was a reliable opponent of the various progressive planks. Appointed to the committee by Schultz, he helped vote down the TPP, minimum wage, single-payer health care and Israel occupation planks, as well as those advocating specific measures to combat climate change.

Covington describes itself as a “trusted advisor to Fortune 100 companies” in sectors ranging from technology to health insurance. “Our clients include pharmaceutical and biotech manufacturers, medical device manufacturers, health plans, providers,” the firm’s website reads. The energy industry is also a major client of the firm, which boasts of helping “all the major domestic oil and gas trade associations in defending multiple … lawsuits raising environmental challenges to continued exploration and development in the Gulf of Mexico and elsewhere.”

For his part, Berman works specifically in the realm of intellectual property and entertainment. Along with strengthening drug companies’ monopoly powers and imposing patent term extensions on medicine, the TPP agreement would also extend copyright terms overseas and internationalize the United States’ heavy-handed policies for making internet service providers remove content deemed in violation of copyright. As The Intercept reported in May, lobbying disclosures show Berman lobbied for the Motion Picture Association of America (MPAA) in 2016, a major proponent of the TPP.

Carol Browner and Wendy Sherman, delegates appointed by Clinton, each work for Albright-Stonebridge, a well-connected consulting firm chaired by Clinton ally Madeline Albright. Both are Senior Counselors at the firm, though Sherman served as Vice Chair before joining the State Department in 2011 and leaving in 2015. While on the drafting committee, the two voted down the planks related to the TPP, $15 minimum wage, single-payer health care and climate change—despite the fact that Browner has at various times worked as the head of the EPA and as Obama’s climate czar, and is currently the chair of the board of the League of Conservation Voters. In addition to this, Sherman also helped defeat the Israeli occupation plank.

Like Covington, Albright Stonebridge doesn’t list its clients. According to a 2011 ethics disclosure obtained by The Intercept in May, however, some of Sherman’s clients included Coca Cola, Wal-Mart and Dow Chemical—all supporters of the TPP.

The firm’s website also lists copious case studies where it has interceded around the world on behalf of large corporate clients. In one case, it was hired by a “major consumer finance company” to help it secretly undermine an unnamed popularly supported law in Japan that would have impacted its business, including leveraging the firm’s political connections to get U.S. officials to advocate for the company’s position in talks with the Japanese government. It also worked to help two pharmaceutical companies overcome regulatory hurdles in Brazil and Saudi Arabia, in one case by helping the firm secure a patent for one its drugs, thereby “prevent[ing] the potentially competitive generic product from entering the market.”

Neera Tanden, the president of the Center for American Progress (CAP), was also a reliable conservative vote, opposing every single one of the platform amendments mentioned so far. CAP describes itself as a progressive policy institute that promises to “not just change the conversation, but to change the country” through “bold, progressive ideas.” CAP does in fact receive much of its funding from charitable foundations like the Bill and Melinda Gates Foundation, and its action fund has received hundreds of thousands of dollars from unions over the years.

Still, it also receives significant support from corporate interests, though CAP is quick to point out these only make up 6 percent of its total funding. Some of its donors also happen to be major backers of the TPP and/or bitterly opposed to a higher minimum wage: Wal-Mart, Apple, Google, the MPAA, AT&T, Comcast, GE and Coca-Cola, to name just a few. (The Walton Family Foundation also donated between $500,000 and $999,999 in 2014.) Major financial firms like Blackstone, Bank of America, Citigroup and Goldman Sachs are also long-time donors. The U.S. financial sector has been a major supporter of the TPP, and they stand to benefit handsomely from the agreement.

Health insurers, who would lose out significantly from health care reform, also show up on the list of CAP funders. The Blue Cross Blue Shield Association has been donating for years, as has the Health Care Service Corporation and American Health Insurance Plans, a major opponent of single payer health care. Albright Stonebridge Group is also a longtime donor, and Carol Browner has held various positions at CAP.

Several of these names are also part of CAP’s “Business Alliance,” a membership rewards program for corporate donors that promises benefits that range from membership in the Green Energy Economy Council (GEEC) to private meetings and discussions with CAP officials and political and business leaders. Although the membership list is secret, a 2012 list obtained by The Nation included names like Verizon and the pharmaceutical giants Amgen, Pfizer and Johnson & Johnson, to name a few.

While at first glance inconsistent, Tanden’s votes against a fracking ban, carbon tax and a provision to keep fossil fuels in the ground show that one can simultaneously support business interests for both alternative energy and fossil fuel companies. CAP’s advocacy for alternative energy and Tanden’s votes against the climate change planks also suggest that an overarching commitment to the environment might not be what drives them, but rather a willingness to represent their donors’ interests.

Sanders appointee Bill McKibben complained that while everyone on the drafting committee agreed fossil fuels had to be phased out by 2050, the delegates voted down every specific proposal for doing so.

Campaign donations also sit uneasily with some of the platform amendments. While the vast majority of Illinois Rep. Luis Gutierrez’s funding over the years has come from unions, he is also well-funded by the securities and investment industry, commercial banks and finance/credit companies—all big TPP supporters. Another TPP supporter, AT&T, has been one of Gutierrez’s top contributors over the course of his career, giving him $10,000 in the 2015-16 cycle—7 per cent of the total amount he raised.

A further top contributor to Gutierrez’s campaigns has been Exelon Corp, an energy provider which generates power predominantly through nuclear, natural gas, oil and coal—a combined 93 percent of its fleet. Exelon has given Gutierrez more than $48,0 00 over the years. Gutierrez ultimately voted against the TPP and single-payer amendments, along with several of the climate change planks.

Financial contributions did not always correlate with the way committee members voted. Despite receiving more than $100,000 from the pharmaceuticals industry over the course of her career—including $47,550 from biopharmaceutical company Gilead Sciences, which has given her over $15,000 in 2015-16 alone—California Rep. Barbara Lee joined the Sanders appointees in voting for the single-payer amendment.

Similarly, Sanders appointee Minnesota Rep. Keith Ellison has received his fair share of money from the securities and investment industry, commercial banks and pharmaceuticals. This didn’t stop him from voting for all of the Sanders-backed amendments, however, some of which he himself put forward.

As studies have pointed out, political donations don’t always correspond directly with political positions because cash doesn’t necessarily invalidate a politician’s personal beliefs, or the interests of their constituents. However, as economics professor Thomas Stratmann has written, buying access is a major motive of contributions. “Legislators may be more willing to listen to lobbyists representing large contributors than small ones,” he says.

Or as one former lobbyist put it: “They give soft money because they believe that’s what helps establish better contacts with members of Congress and gets doors opened when they want to meet with Members. … The large contributions enable them to establish relationships, and that increases the chances they’ll be successful with their public policy agenda.”

The drafting committee last month did not have the last word. Last Friday, the full platform committee met in Orlando to make further tweaks to the text, where the fate of these initially defeated planks was mixed. Democrats ultimately inserted language calling for a $15 minimum wage and adopted what Sanders called “the most aggressive climate change plan in history,” committing the Democrats to a price on carbon, stricter rules on fracking and establishing a climate impact test for new pipelines—language that doesn’t go nearly as far as the original amendments (and is inadequate for preventing catastrophic climate change), but is indeed historic. At the same time, Clinton supporters once more shot down language opposing the TPP and condemning Israeli “occupation and illegal settlements.”

The gauntlet run by the platform text does not end here, as it still has to be ratified at next week’s Democratic national convention, where it will be voted on by convention delegates. The Sanders campaign has announced it will not further contest platform planks, but as a previous report by In These Times showed, the presence of superdelegates at the convention could still water down the platform, as it has in the past. Progressives should keep up the pressure until then.